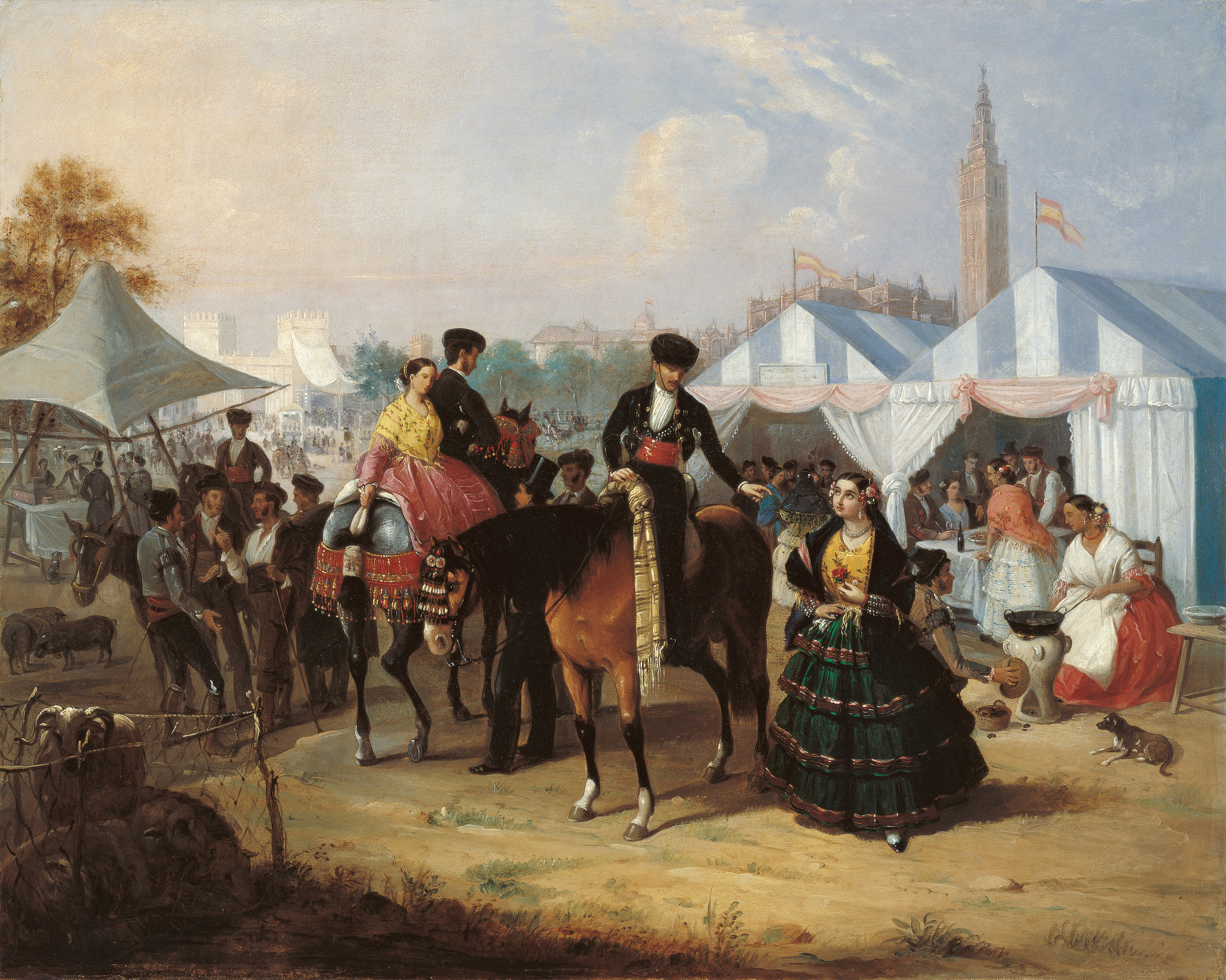 At the Seville Fair

The April Fair in Seville, established at the initiative of locals José María Ybarra and Narciso Bonaplata in 1847, was an event that was both commercial and festive and had huge iconographic repercussions in literature (for example, the writings of Gustavo Adolfo Bécquer) and in 19th- and 20th-century painting. Painters such as Andrés Cortés, Joaquín Domínguez Bécquer and Manuel Rodríguez de Guzmán produced panoramic views of the event, its venue, the motley crowd of visitors and its distinguishing characteristics. This approach is taken in At the Seville Fair by Manuel Cabral Aguado Bejarano, a key figure in Sevillian genre painting whose original contributions denote a distinct personality within this type of painting.

The present painting is a view of the event in the Prado de San Sebastián, an area of common land located outside the city walls. It shows the people commonly found at this particular celebration and other characteristic urban types of a city that was special to foreign and Spanish travellers alike as well as to its own inhabitants. There are people on horseback – a sign of the new power wielded by the agricultural bourgeoisie; these horse and farm owners occupy a central, prominent place in the composition. We also find lower-class types such as the fritter sellers, whose presence was essential at this event and who are usually portrayed as gypsy women in traditional costume adorned with flowers, accompanied here by men in Andalusian-style short jackets and hats with conical crowns; this type of attire contrasts with that of the wealthier classes who tended to adopt the “foreign” – i.e. French – way of dress. Other types bargain shrewdly and deal in horses next to a fold containing sheep and pigs; these figures emphasise the market aspect of the fair, one of its main purposes in a city keen to base its economic prospects on its surrounding rich agricultural area.

The painting also draws attention to the festive nature of the event. The particular bustle of the marquees – the home transferred to a “tent” – introduced by an ancestor of the poets Antonio and Manuel Machado underlines the contrast between the private realm and the outside world.

The architectural setting is the city of Seville defined by its main landmarks: the cathedral with the Giralda, the Reales Alcázares, the royal tobacco manufactory and the Puerta de San Fernando (not yet demolished as the city was still surrounded by walls and gates). The background scenes are rendered in great detail.

Whereas other painters approach this subject matter as an event that intrinsically defines the city, the singularity of Manuel Cabral Aguado Bejarano’s picture lies more in its documentary nature, in the air of portraiture of the main figures – the central couple are similar to the couple in Pareja serrana in the Museo del Romanticismo in Madrid – and in the detailed depiction of the costume, horses and trappings than in the chromatic atmosphere influenced by English painting and Murillo.

This painting completes Manuel Cabral’s iconographic contribution to the main festivities held in Seville. The Corpus Christi feast (Corpus Christi Procession in Seville, 1847, Madrid, Museo del Prado) and Easter Week (Easter Friday Procession in Seville. Monserrat Brotherhood, 1862, Patrimonio Nacional, Seville, Reales Alcázares) are favourite themes of this painter, who stands out in Sevillian genre painting for his documentary approach to the people and themes he depicts with originality.

At the Seville Fair