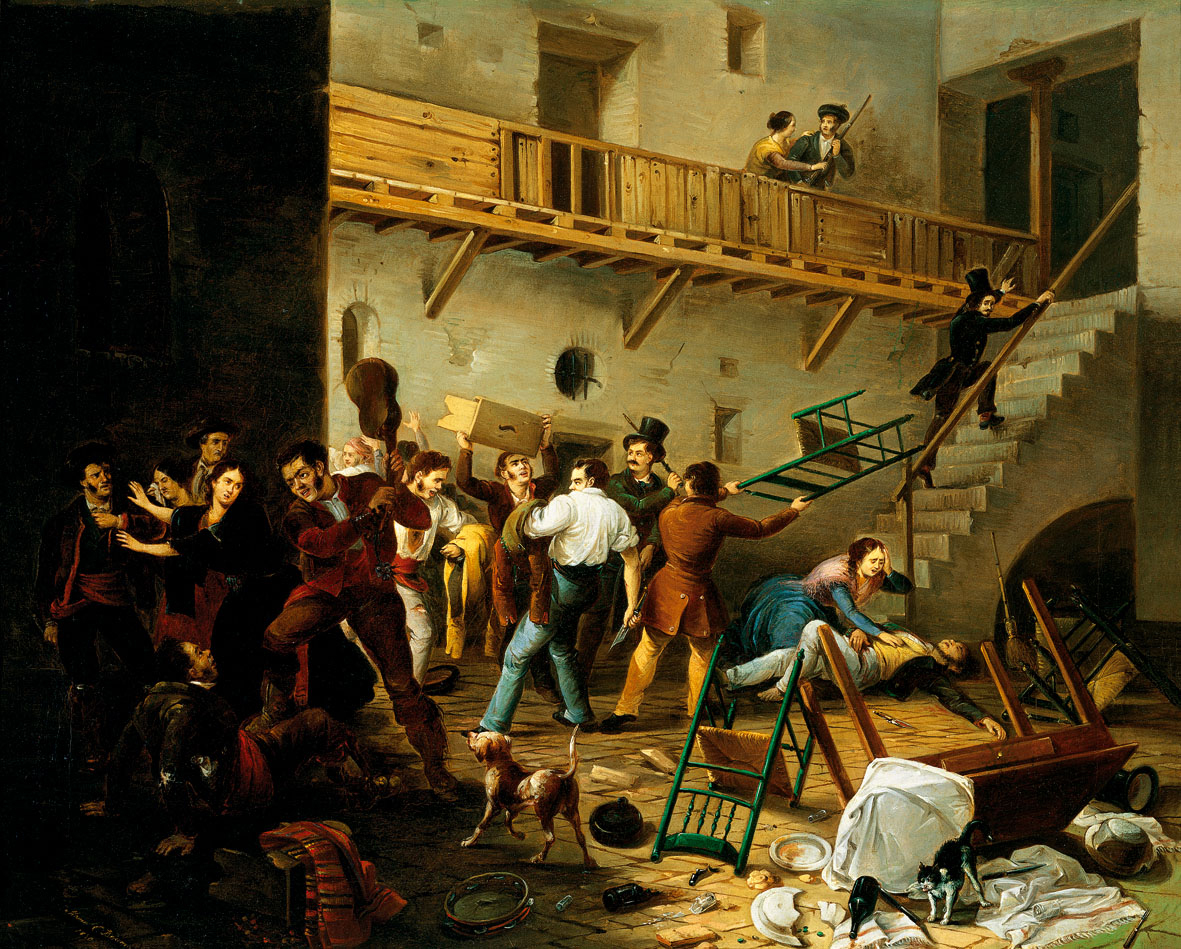 A riotous brawl involving various people of motley appearance is going on inside an Andalusian inn. Towards the middle of a spacious and modest room, a man with his left arm wrapped in a garment shields himself from his opponent’s assault and brandishes a sharp knife in his left, poised to launch into an attack. Around him are many more violent scenes, such as the man on the left of the foreground who swings back a guitar to smash it on the head of the man on the floor, and the first serious casualty lies limply on the floor while a woman weeps in despair. Meanwhile, a gentleman who appears to have left behind his companion in the quarrel flees up a flight of stairs near the tragic couple. In the upper part, another figure seems to be about to put a stop to the tremendous chaos by firing a shotgun.

This is most likely the companion piece to the picture entitled Drunkard at an Inn, with which it entered the Carmen Thyssen-Bornemisza Collection, and to which it bears a certain resemblance in format and theme. The latter is of more middling quality, even though both are among the earliest examples of a composition of certain importance in the Sevillian painter’s output.

Contrary to what has been suggested, it seems obvious that this pair of paintings is not strictly inspired by one of the tales published by Estébanez Calderón in his Escenas andaluzas, as it does not follow a narrative structure. However, one of the connections between the two scenes is the festive and violent atmosphere, which is found in the tale of “El Roque y el Bronquis”1 set in a similar place – as is the case of many short farces portraying everyday life, which had been very popular in Spain since the dissemination of the works of Don Ramón de la Cruz. The other is that the theme of the present work appears to be a continuation of that of its companion piece.

In addition to the common feature of the comic situation established by the similarity of the setting and the common presence of the central figure, who drinks a toast in one of the canvases and in the other attempts to attack his opponent with a knife, compositions of this type can be traced back to a remote origin: the work of Goya, especially paintings such as Brawl at the New Inn (Madrid, Museo del Prado), which features not only a fight involving a crowd but also a figure, perhaps an innkeeper, who is about to put an end to the brawl by opening fire.

The present painting brings together all the commonplaces of the repertoire of this type of genre painting in the most archetypal setting, the inn, in order to illustrate the violence and vehemence of the Spanish character – which can switch instantly from merrymaking to fierce fighting – of which travellers around Andalusia wished to take back mementoes in paintings like the present one.