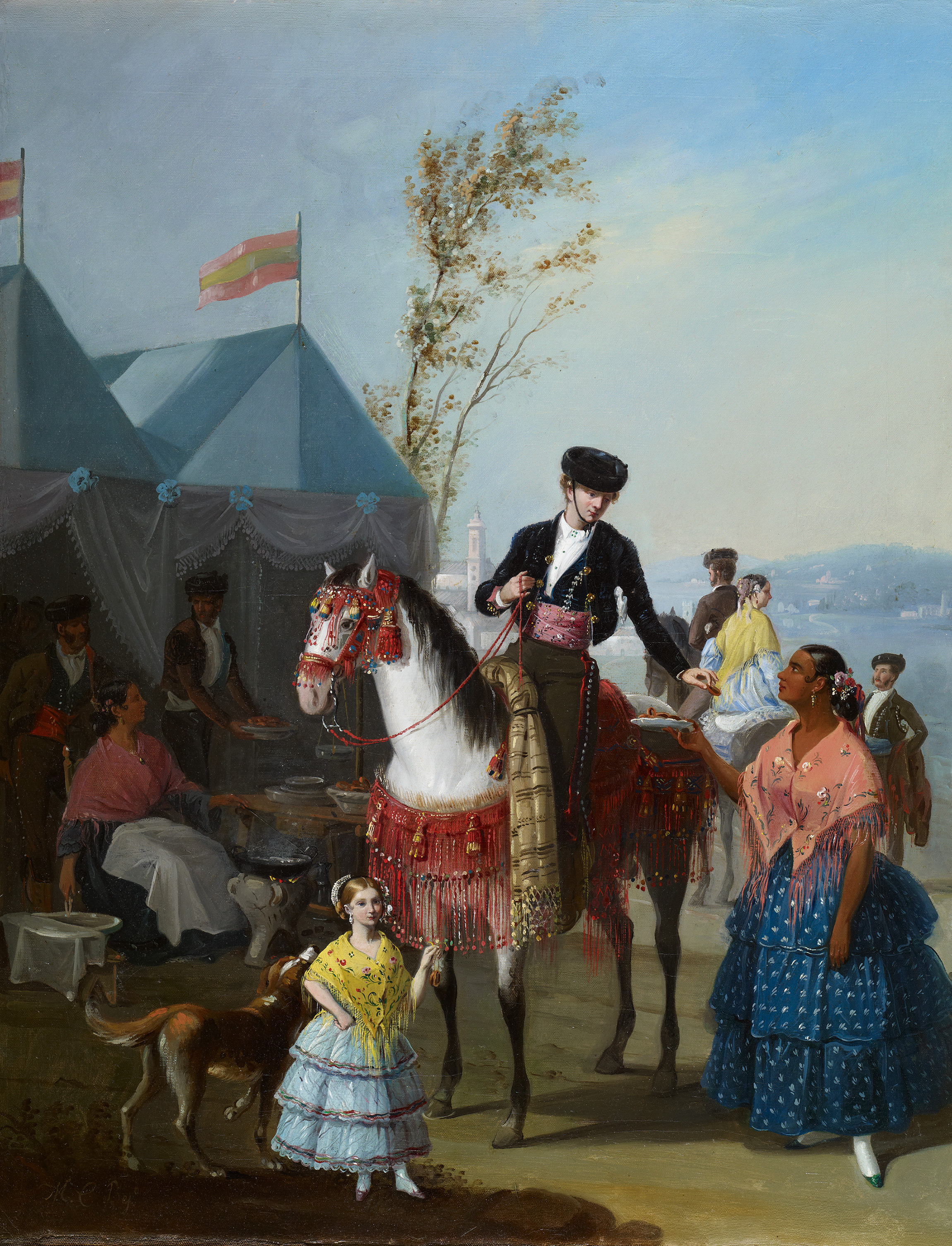 Owing to the fresh impetus it gave to the city’s trading activities, the Seville Fair, which was first held in 1847, became one of the most important social events of the Andalusian capital, along with the Easter Week celebrations. From the outset it gave rise to a rich iconography including photographs, writings and, of course, paintings, which perfectly illustrate its festive nature.

Stalls and marquees were put up along the Prado de San Sebastián on the outskirts of Seville to promote transactions of all kinds – the purpose for which the fair had been devised – and, more importantly, to foster social relations. It thus became the place par excellence where Sevillians enjoyed exhibiting themselves and saw themselves proudly reflected in the pictures of the fair.

The composition of the present work – repeated in many paintings and some photographs, such as Beauchy’s Las buñoleras en la feria (“Fritter Sellers at the Fair”, private collection), which depicts the “famous fritter seller of El Salvador” – is centred on a dashing horseman on a richly decked out pale sorrel steed who takes buñuelos or hollow fritters from a plate held out to him by a gypsy woman. A fair-haired girl walks by his horse holding two fritters threaded onto a green ring. Behind the gentleman are several groups of figures: a woman sitting outside her marquee fries more buñuelos, accompanied by two men; on the other side a rider retreats into the background and the woman sitting behind him waves to a standing majo, who returns her greeting. They all capture the viewer’s attention for their purely theatrical narrative of gestures, which could be inspired by paintings of theatre scenes or by the short farces performed in this period as an entertainment of the lower classes.

Bejarano displays technical virtuosity in this painting, in which he pays attention to anecdotal details and achieves a fairly complex composition despite the small format, as evidenced by the arrangement of the figures around the central horseman. However, there are a number of compositional incongruences: for example, the wind that causes the flags to billow above the marquees blows in the opposite to direction to that which moves the tree top immediately behind them; and the scale of the human figures is not always consistent. Although some areas are drawn more rigidly, such as the outline of the gypsy woman holding out the plate to the rider and the silhouette of the main figure and his mount, emphasised by the cold, studio-like raking light that permeates the composition, the most striking feature of this painting is its attractive colour and the Sevillian master’s bold handling of it, no doubt inspired by the vivid experience of the fair that was famous precisely for its picturesque appeal.

This painting forms a pair with Cheering at the Gates of the Farm. They entered the Carmen Thyssen-Bornemisza Collection together, although there is no narrative link between them other than the fact that they both depict festivities in an Andalusian setting.