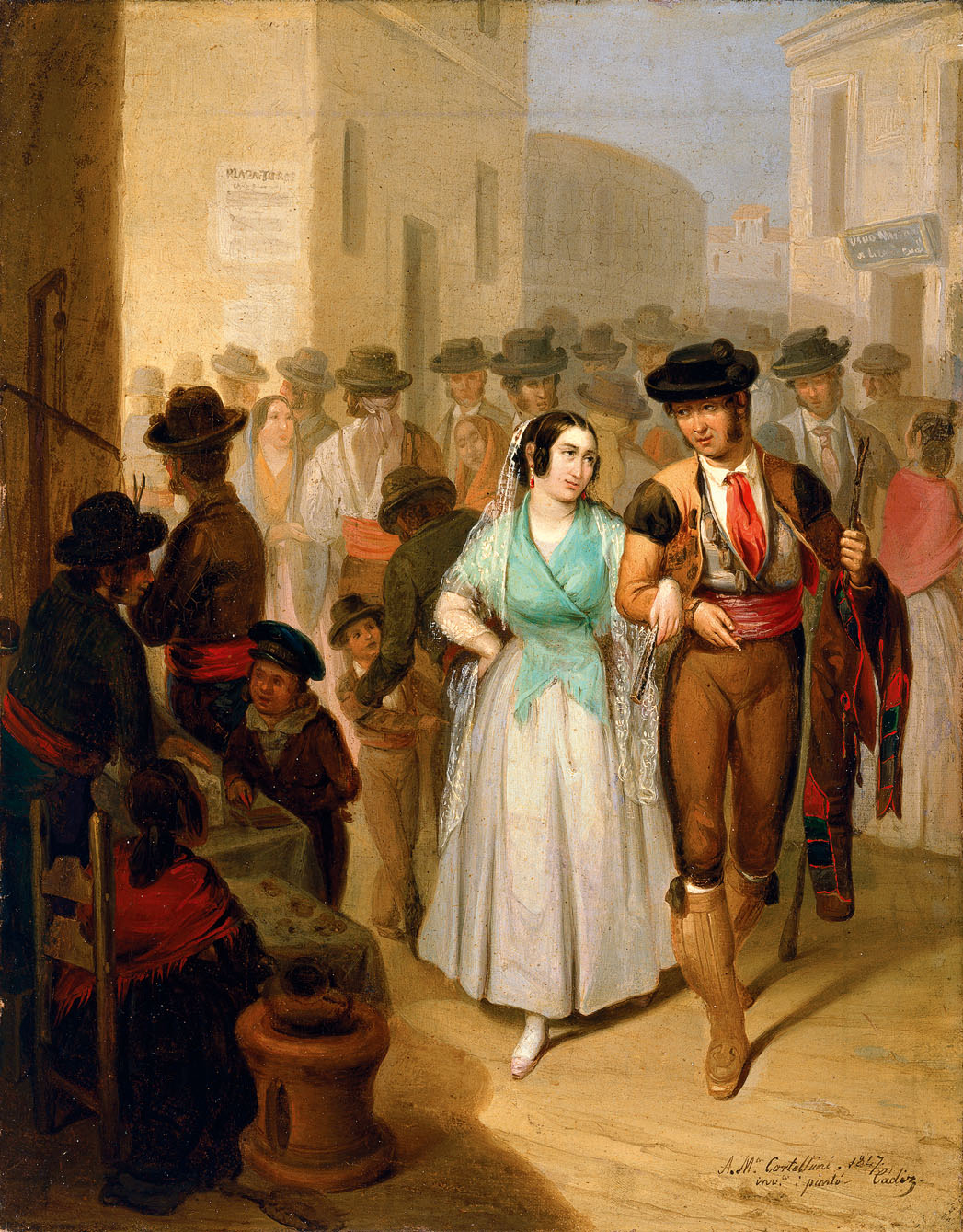 The present work is the companion piece to the painting of Francisco Montes, “Paquiro”, before a Bullfight, now also in the Carmen Thyssen-Bornemisza Collection. Both belonged to a small series, together with two other scenes entitled Despedida del picador antes de la corrida (“The Picador’s Farewell before the Fight”) and El baile (“The Dance”), in the same format and all signed in Cadiz in 1847; unfortunately the set has now been broken up.

The painting depicts the moment when people leave after a bullfight has ended and crowd into a narrow street leading off from the bullring, whose silhouette is visible in the background. The same young woman who was about to serve “Paquiro” a glass of wine in the companion piece now strolls towards the foreground clutching the arm of a dashing young man with long sideburns, impeccably dressed in the typical Andalusian short jacket and holding a long stick in his left hand. The woman is entranced by his conversation as they pass a stall selling fritters on a corner of the street, in the shade. The rest of the figures in the bustling crowd are barely sketched, and the spectator’s attention is therefore focused on the couple.

Ángel María Cortellini is known chiefly as a reasonably proficient portraitist who espoused the elegant and affected purism made fashionable at the court of Isabella II by the great master Federico de Madrazo; he enjoyed a certain amount of recognition for these portraits in his day and they became his chief source of income. However, no less interesting is his activity as a painter of genre scenes; indeed, he shows his more personal style in this genre, of which these bullfighting pictures are an excellent example. The Carmen Thyssen-Bornemisza Collection owns another two paintings belonging to this genre; signed by the artist around the same time, they are originally from the Urquijo Collection.

These paintings display the usual features of the picturesque genre scenes of this kind that left an indelible mark on Andalusian Romantic painting. They are characterised by the anecdotal flavour of their themes, their vivid colours and a fondness for detail in the depiction of human types and costume. However, the paintings of this kind painted by Cortellini exhibit very personal stylistic traits which attest to his sound academic grounding, such as the emphatic modelling of the volumes of the human figures – especially in the present work where the main couple is given a radically different plastic handling to the rest of the figures – and also their considerable proportions within the scenes, a fact which make them the absolute protagonists, while the setting is reduced to a simple spatial reference.

This artist’s human models – particularly the women with oval-shaped faces, long noses, large eyes and small mouths – are also highly characteristic, and, even in less significant works like the present one, display a particular technical refinement that evidences his considerable artistic skills. This refinement is clearly seen in aspects such as the rendering of the clothing and the modelling of its folds, or in the restrained gestural expression of the figures which, despite being “types”, are infused with a subtle elegance – a sign of the strictly academic training that shaped his style.