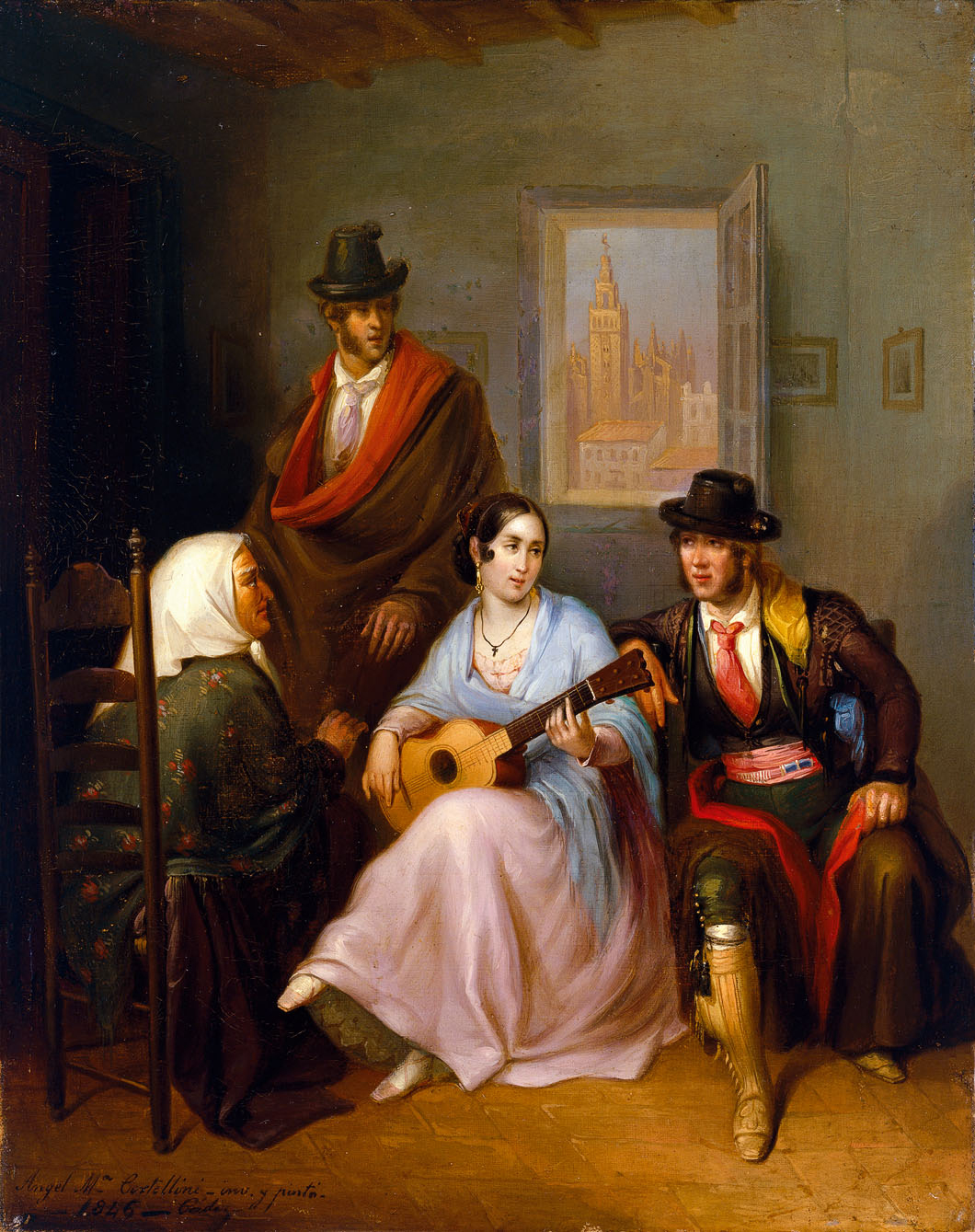 In 1846, the same year that Cortellini executed this painting – also known as Majos de Triana (“Majos of Triana”) and Toreros con una guitarrista (“Bullfighters with a Guitarist”) – in Cadiz, the book Gatherings from Spain came out in London. It was the sequel to A Handbook for Travellers in Spainpublished the previous year by Richard Ford, a keen and implacable observer of Spain of the day, and enjoyed huge popularity at the time. Ford’s splendid book is still used today as an essential source for studying how Spain was perceived then. His work describes the rooms of boarding houses, taverns and inns which the traveller came across and which are not very different from the one depicted in the painting: “The walls of the apartments are frequently, though simply, whitewashed: the uneven brick floors are covered in winter with a matting made of the ‘esparto’ rush, and called an ‘estera’.”1 Although he was fairly cautious about expressing his opinions in this published work, he did not mince his words in a letter sent to his friend Addington, the English ambassador in Madrid, about the women of Madrid, whom he described as “shivering and uncomfortable, wrapped up in a shawl in their great barn-like, unfurnished houses; a matted rush and a few chairs the inventory of their chattels”. In the present scene, which largely fits this description, several people enjoy one of the everyday sights that surprised and fascinated the English writer: after-lunch conversation and entertainments, a typical custom of the country. A young woman sitting in the middle of the tavern plays the guitar, while an elderly woman appears to keep an eye on her owing to the presence of two men, one standing behind her and the other seated on her left who gazes at her attentively and to whom she appears responsive.

Ford explains as follows what the picture appears to show: “in order to feel the full power of the guitar and Spanish song, the performer should be a sprightly Andaluza, taught or untaught; she wields the instrument as her fan or mantilla; it seems to become a portion of herself, and alive; indeed the whole thing requires an abandon, a fire, a gracia, which could not be risked by ladies of more northern climates and more tightly-laced zones.”

The characteristic style of Cortellini in his early period – of which this painting is held to be the earliest known example – is based on emphatic modelling and drawing, and timidly heralds the technical perfection that secured him a small but sufficient clientele years later, when he established himself in Madrid. The exquisite subtlety of the colour of the pretty guitarist’s clothing and Cortellini’s delicate rendering of her jewellery, the ease with which he executes the majos’ clothing, taking delight in the most attractive details of their traditional dress, and the casual handling of their loose, flexible poses make up for certain perspectival weaknesses such as in the chair back or the careless facture of the old woman’s profile.

Framed by the window, as if a picture within a picture – indeed, it is the most important feature of the decoration of the entire room – Seville’s most important landmark, the cathedral with the Giralda on one side, is perfectly recognisable. This view of Seville from the window, an original compositional device employed by Cortellini to emphasise the Andalusian character of his work, coincides perfectly with the vision then being made popular throughout Europe by the many Andalusian pictures that travellers took home with them as souvenirs of their stays in Andalusia or by dealers who bought them in Seville and Cadiz to sell abroad.

The work, no doubt the companion piece to another Tavern Scene by the same artist which entered the Carmen Thyssen-Bornemisza Collection at the same time, was lithographed by Federico González for the Revista Médica de Cádiz, and an example is held in the Museo del Romanticismo in Madrid.