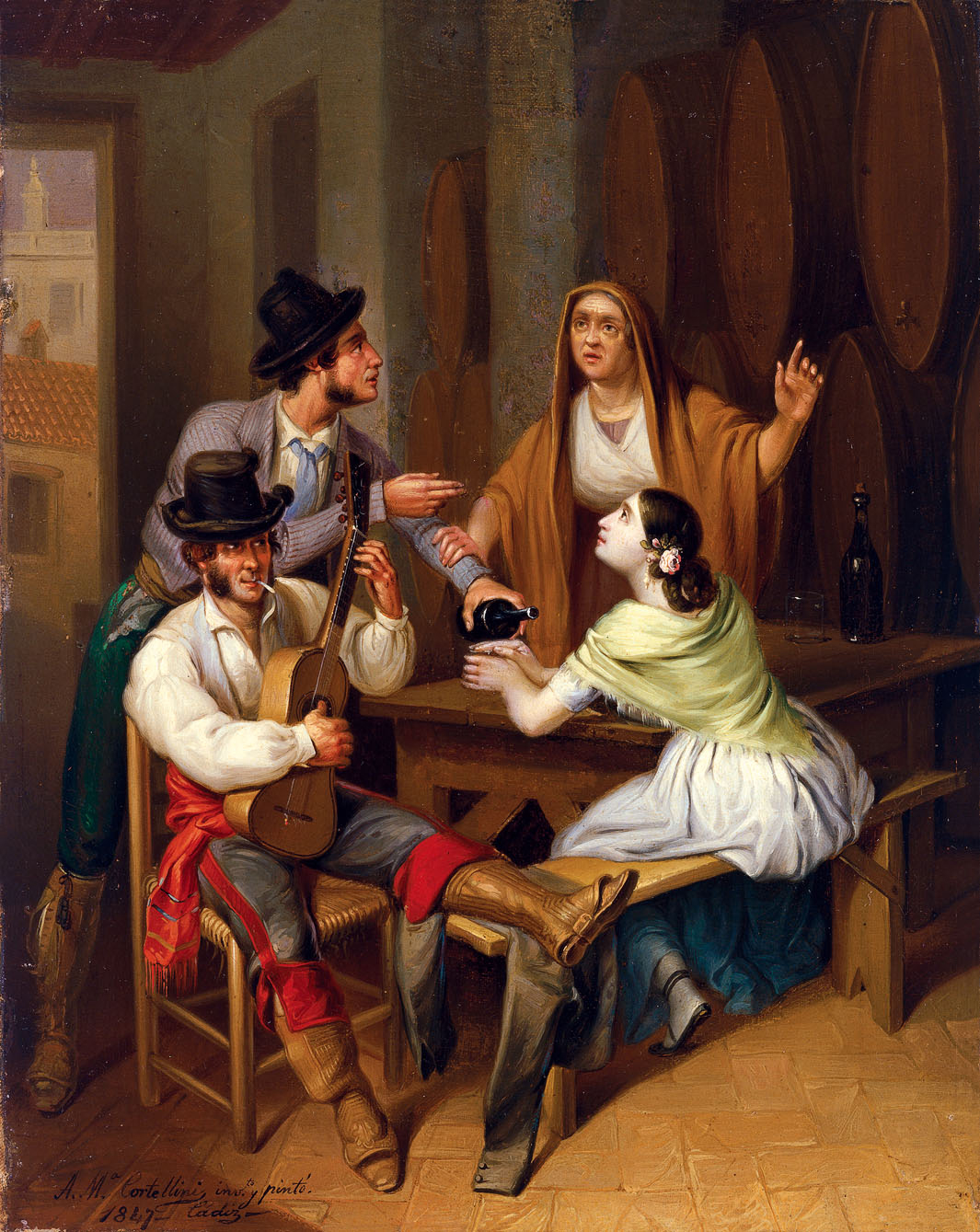 Inside a wine shop or tavern, as indicated by the barrels on the right, a young man attempts to serve more wine to a girl sitting on a bench with her back to the spectator. The girl covers her glass with her hands, while the owner – an elderly woman wearing a widow’s headdress – pushes the spirited young man’s arm away with her right hand and scolds him with her left. Next to them a second individual, who has removed his jacket, strums a guitar. He looks like one of the Figaros Richard Ford reports seeing during those years at evening gatherings in taverns and inns all over Spain: “a guitar is strummed, for some black-whiskered Figaro is sure to have heard of the ‘arrival’ and steals down from the pure love or harmony and charms of a cigar.”

The composition of this work, also known as Una taberna, Cuadro costumbrista (“A Tavern, Genre Picture”) or Toreros en la taberna (“Bullfighters in the Tavern”) is notable for the scenographic conception of the space, almost as stage machinery. This, together with the handling of the figure of the woman covered in a thick shawl, denotes the influence of the artist’s formative period in the Italian Piedmont region. While in Italy he must have come into contact with local set designers’ paintings and also taken an interest, at least superficially, in the flourishing collecting of classical antiquities – most likely encouraged by his master José Domínguez Bécquer at his Academy of Antiquity – which seem to inspire some of the figures in his early works, such as the old woman depicted here or the one in profile in Serving Girl Singing in the Carmen Thyssen-Bornemisza Collection, probably the companion piece to this painting.

Cortellini is very skilled at handling colour, both the subtle hues of the girl’s dress and the brighter reds of the guitarist’s attire and especially the darker garments worn by the two men, whereas his modelling ability is weaker in the whites of the textiles in all the figures. There is a substantial contrast between his finished, painstaking rendering of the details of each figure, such as the flowers in the girl’s hair and the boots worn by the two male figures, and his scant concern for characterising the atmosphere of the tavern, which he merely sketches.

Scenes of quarrels and brawls set in taverns became an essential theme in the repertoires of genre painters, including Cortellini, as these establishments brought together all the human types – the showily dressed, lower class majos, majas and chulas, as well as smugglers, bullfighters and dancers – and situations such as dangerous fights and brawls, prostitution, celebrations and dancing that his potential clients found so interesting.