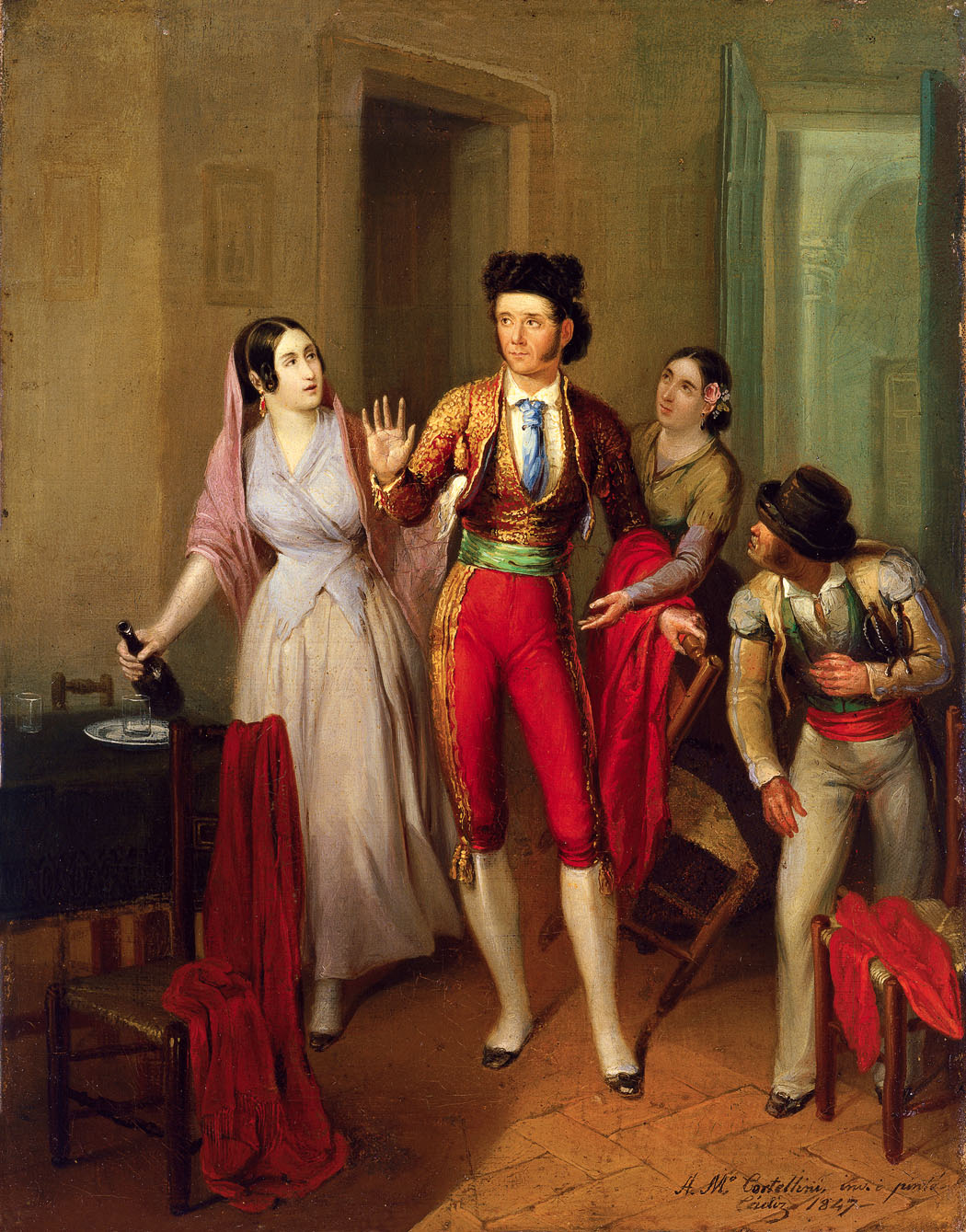 In the room of a house, the maestro has just donned his bullfighter’s costume and is ready to leave for the bullring, hastened by his assistant, who picks up the cape and swords from a chair. Two women stop him to offer him a glass of wine, which the younger one is about to serve, but the bullfighter, concerned about his performance in the ring, makes a gesture of refusal.

This interesting painting, which is relatively well known among bullfight lovers for its curious iconography, is part of a small, attractive series of bullfight pictures in the same format executed by Cortellini in 1847. The series belonged to the Urquijo Collection and also featured La despedida del picador (“The Picador’s Farewell”), with which it would have formed a pair owing to the similarity of the theme; El baile (“The Dance”), perhaps the most refined and skilfully painted picture of the whole set; and Leaving the Bullring, acquired along with the present work for the Carmen Thyssen-Bornemisza holdings and now its companion piece in the collection.

In addition to its artistic merits, the painting attests to the extraordinary fame enjoyed in his own day by the bullfighter Paquiro, undoubtedly one of the most legendary and celebrated figures of the bullfighting world in Spain under Isabella II and probably one of the matadors whose likeness was most widely circulated in illustrations.

Indeed, in addition to featuring in many engravings and lithographs, Paquiro was painted by some of the foremost Spanish Romantic painters such as José Elbo (1804–44), who produced an interesting double portrait of Francisco Montes “Paquiro” and His Wife, now in the Museo Taurino in Lima, José Domínguez Bécquer (1805–41), who portrayed him with his assistants in Montes, primera espada de España (“Montes, Leading Bullfighter in Spain”), engraved by Bayot, and the well-known painter and keen bullfight enthusiast Ángel Lizcano (1846–1929), who produced a new bust-length portrait of the matador in 1904. Other known portraits of this bullfighter include one attributed to Eugenio Lucas Velázquez (1817–70) executed in a spirited and temperamental technique; a smaller, bust-length version based on the latter; a small, full-length portrait, although the identification is somewhat dubious; and a curious print described as “The bullfighter Francisco Montes Paquiro killing a bull in the Royal Celebrations of 1846 in the Plaza Mayor in Madrid, on the occasion of the august marriage of their Royal Majesties the King and Queen and their Royal Highnesses the Duke and Duchess of Montpensier”.

But without a doubt, the finest and best known picture of Montes is the magnificent portrait painted by the Valencian Antonio Cavanna (1815–40), which provided a reference for many repetitions of the portrait of the bullfighter and also a model for Cortellini’s painting, which literally copies the features and position of his face. Nevertheless, there is evidence that four years earlier, in 1843, Cortellini had painted a Retrato de Francisco Montes en la Plaza de la Maestranza de Sevilla (“Portrait of Francisco Montes in the Maestranza Ring in Seville”), currently unlocated. It was most likely the artist’s closest reference when executing this later scene featuring the famous matador.

Francisco Montes Reina, who became known for posterity in bullfighting with the epithet “Paquiro”, was born in Chiclana (Cadiz), where he was christened on 13 January 1805. Although his family had no connections with the world of bullfighting – his father administered the estate of the Marquis of Montecorto – from an early age he showed great enthusiasm for bulls bred for fighting. By 1830 his name featured on the programme for the Puerto de Santa María bullring, where he made his early début as “Paquiro of Chiclana”. After savouring success in the Seville and Jerez de la Frontera bullrings and attending a few classes at the newly established bullfighting school in Seville, he became a fully-fledged torero in Madrid on 8 April 1831. Famous for his boldness and valour, he performed dangerous feats such as fighting two bulls at once, pole-vaulting the bull using his spear and even leaping over the bull from head to tail, a trick which had fallen into disuse and was brought back by him. Sometimes he even acted as picador and he often performed the whole bullfight on his own.

By 1847, the year this canvas was painted, Paquiro had considerably reduced his bullfighting activity, focusing that season on the bullrings of Andalusia and a few in northern Spain, and had stated his wish to retire. His downfall came in the fight held in Madrid on 21 July 1849, where he was badly gored in the leg by a bull called “Rumbón” bred by Manuel de la Torre y Rauri and never recovered from this injury. His convalescence was complicated by a malignant fever that caused his death on 4 April 1851, when he was only forty-six. His death came as a shock to the Spanish bullfight scene of his day, and Estébanez Calderón wrote heartfelt sonnets in his memory.