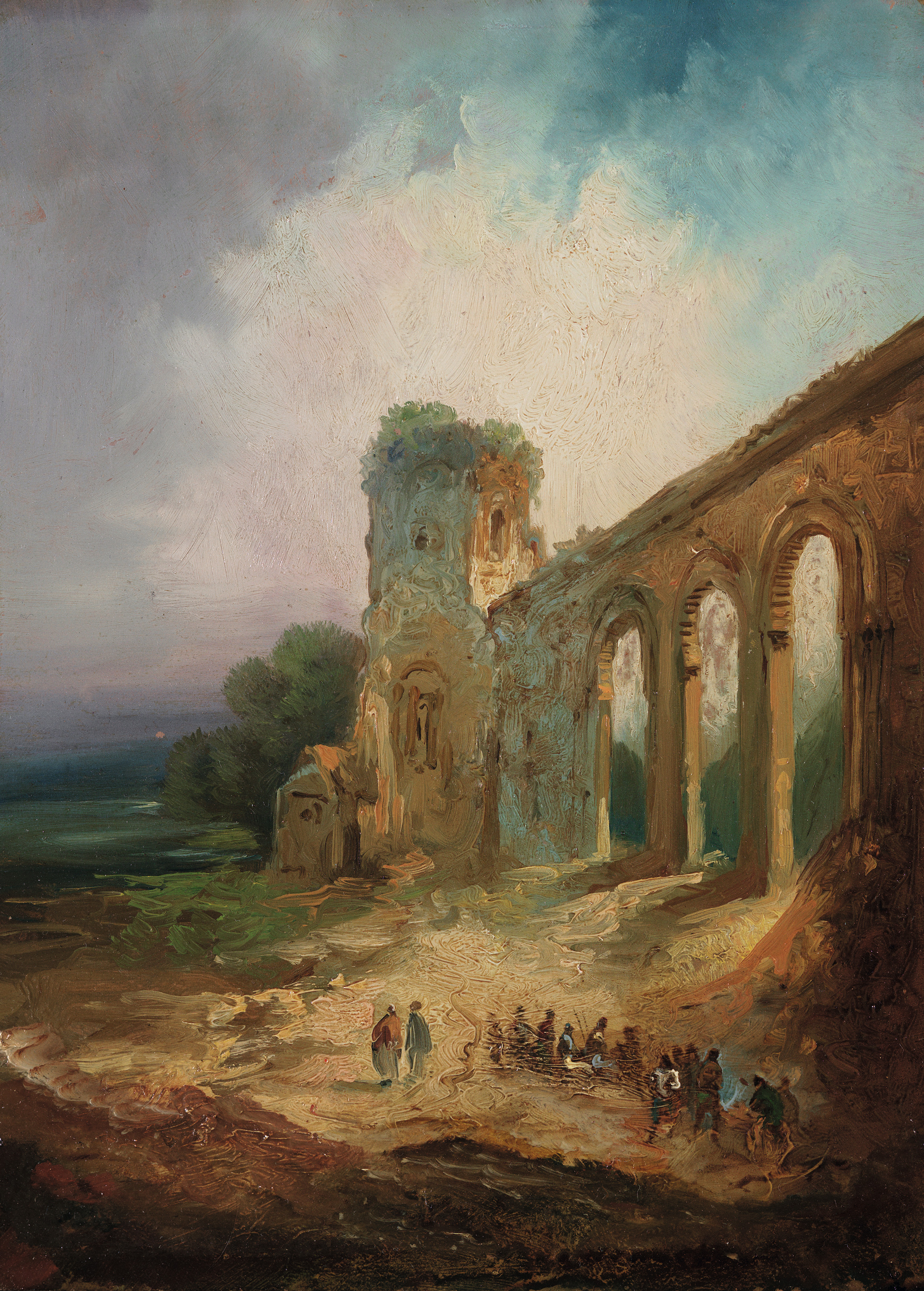 A small convoy of men on foot and riding mules arrives at some ruins. Despite the small size of this panel painting, the architectural remains are recreated with a powerful monumentality that makes this a strictly literary image far removed from reality. Concerned with providing an exciting and lifelike description, Lucas depicts a few details of the old building that allow the viewer to understand where the scene is set. For this purpose he heavily marks the stonework of the three main arches and the corbels decorating the inner surface of the arch and the moulding above it, as well as the remains of the plasterwork on the wall surface, which bring to mind a Spanish Muslim construction.

In this small work the painter makes skilful use of the lighting devices he mastered the best throughout his entire career, focusing the full attention of the painting on the purely landscape aspects of the ruins. Although Lucas was famous above all for his imitations of the art of Goya and for some of his variations on compositions by Velázquez, he also drew on the work of his close friend Genaro Pérez Villaamil (1807–54) for his own landscape paintings. Like his friend, Lucas used pronounced contrasts of light which here cause the three arch spaces to stand out against the setting, lending this part of the construction a powerful presence and darkening the background of the landscape. Also like Villaamil, he relied on the presence of clouds to emphasise the composition. However, the broad, energetic brushstrokes with a plastic vigour are the hallmark and greatest accomplishment of this Madrid-born artist. He always attached importance to his personal, recognisable gestural brushwork and applied the paint using both the bristle and the handle ends of the brush, as in the present work. The small dabs of colour that give shape to the figures and the lush green touches of the foliage covering the abandoned building, drawn with his characteristic elegance, reveal a rapid execution similar to that of many other known examples of his output, although not all are as small as the present work, which was intended to jot down an idea. Indeed, Lucas produced these works in a very short time, often in sessions lasting no more than half an hour, such as the famous painting of the castle on a rock in the Museo Lázaro Galdiano, which is similar in composition to another work by Pérez Villaamil in the museum’s collection.