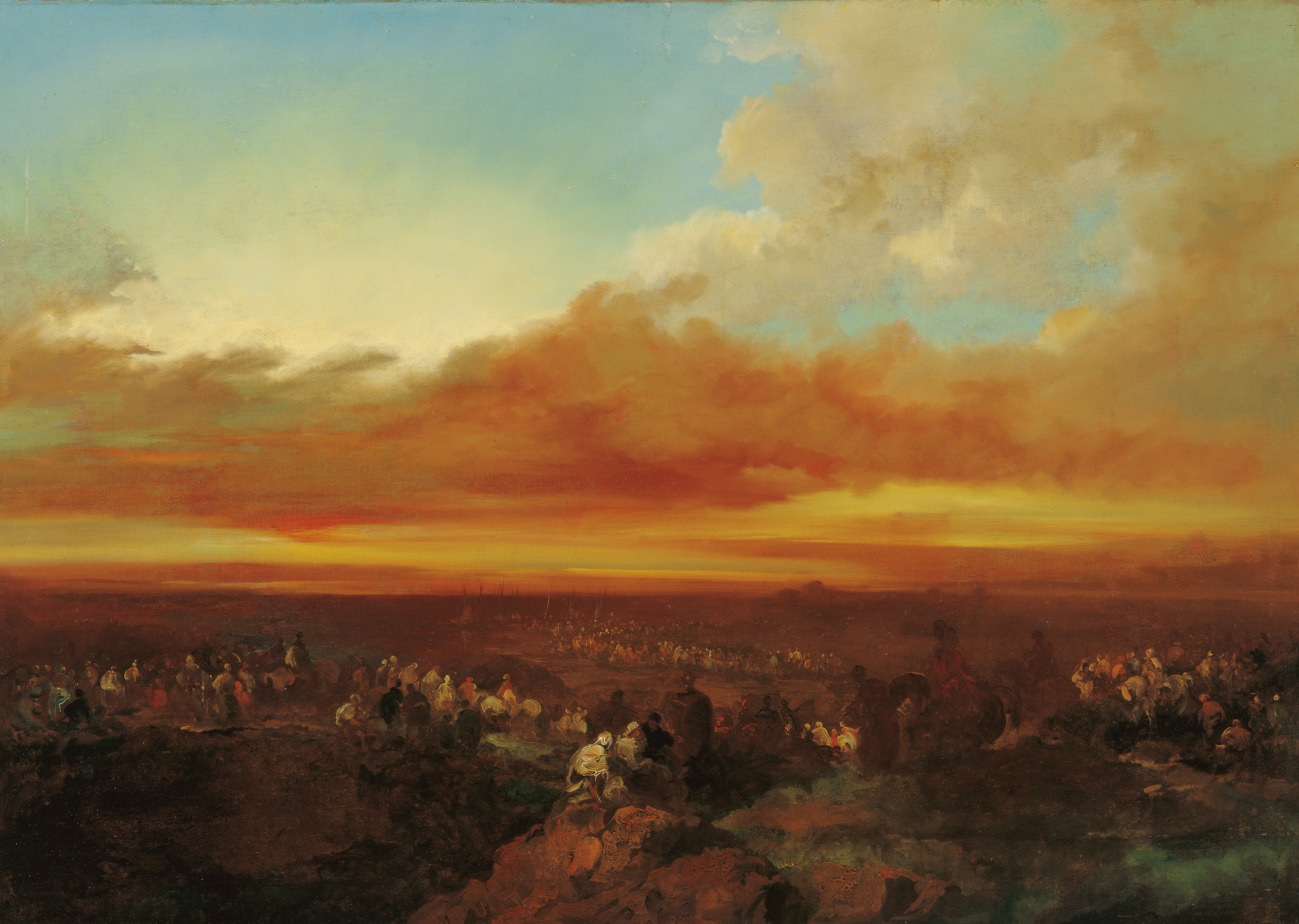 Arab Caravans Arriving at the Coast

Winding their way along the ledges below craggy rocks, several caravans come together on a large plain before heading for the fleet of sailboats that can be glimpsed in the distance, moored off the coast beneath the reddish sunset. The Arab nature of the clothing of the bustling rows of tiny figures making their way on foot or on horseback is barely recognisable, and the reason for their long journey is also left to the spectator’s imagination – though it is most likely that they are going to load their wares onto merchant ships or set sail for far-off lands.

The absolute fascination European Romantic painters felt for the exoticism of the remote and mysterious Arab world – which constituted a uniquely important artistic genre in its own right throughout the century and has been studied with greatly renewed interest in recent years – logically made a special impression on the sensibilities of Spanish painters owing to their geographic and cultural proximity to the Islamic world, particularly Morocco.

Like his close friend Genaro Pérez Villaamil, Eugenio Lucas too was unable to resist the beguiling appeal, so close and yet so distant, that the most typical and legendary prints of Arab customs held for the western public and which Lucas’s inexhaustible imagination had no difficulty evoking from the comfort of his studio. For contrary to what his fondness for Moorish themes might suggest, there is no record of his ever travelling to Africa.

The works of this Madrid painter often feature Moroccan themes, always executed in a supple, vigorous technique, and include other scenes of caravans approaching a coastal port such as those entitled Costa mora al atardecer (“Moorish Coast at Sunset”) – closely related to the present canvas in the arrangement of the masses of figures and treatment of the sky – and Costa mora bajo la luna (“Moorish Coast in the Moonlight”), which is also very similar but depicted in a nocturnal setting.

In the present work the artist barely hints at the figures using quick, nervous brushstrokes and extremely light, synthetic dabs of colour that are sometimes no more than dots to create a rich painterly effect. This is further accentuated by his characteristic command of chiaroscuro effects, which skilfully hint at the different planes and spatial setting of the figures, from the foreground to the misty distance.

In addition, in this canvas Lucas again displays his undisputable mastery of landscape painting, which has yet to be fully acknowledged but is evident here in both the panoramic conception of the vast plain stretching into the marine horizon that can barely be made out and above all in the prominence given to the sky. Indeed, the sky takes up nearly two-thirds of the picture surface, populated with large masses of tattered clouds that blend in the distance into a fiery, vibrant dusk which envelops the whole landscape in an almost magical light that accounts for much of its appeal.

Du Gué Trapier draws attention to “the red, flame-like clouds fluttering like a battle standard”, and the “intelligent execution [and] the boldness of its range of colours”. Gaya Nuño calls it a Cabalgata mora (“Moorish Procession”), and, much more recently, Arnáiz entitles it Un ejército en campaña (“An Army in Campaign”) and refers to its whereabouts as being unknown.

Arab Caravans Arriving at the Coast