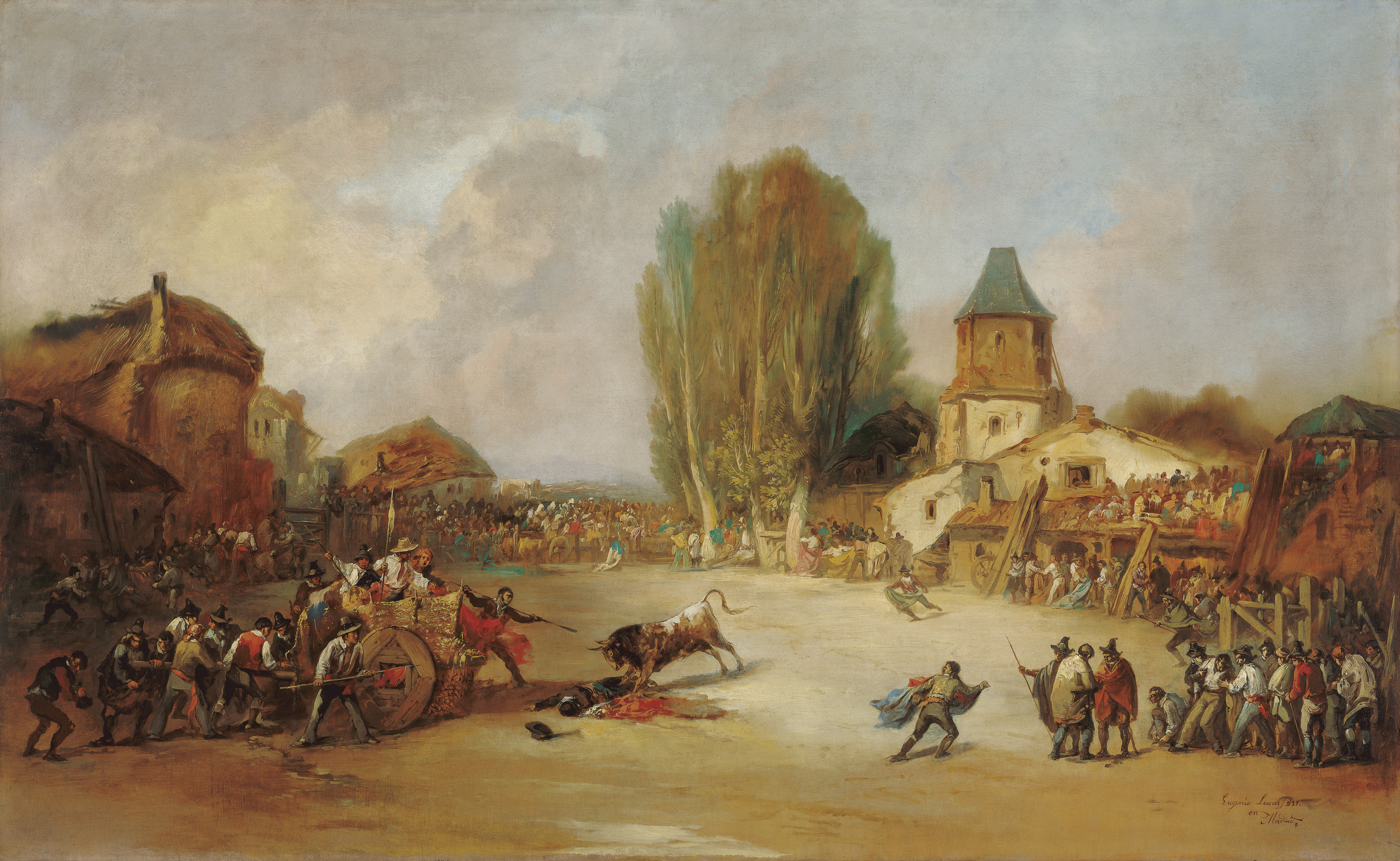 Goring at a Village Bullfight

Following the acquisition of this spectacular bullfighting scene, the great master of Madrid Romantic painting Eugenio Lucas Velázquez is now magnificently represented in Baroness Carmen Thyssen-Bornemisza’s collections of 19th-century Spanish painting. He was the foremost practitioner of Goya’s style in the middle years of the 19th century, as splendidly illustrated by the present painting on a favourite theme from Goya’s universe: the world of bullfighting, of which, as is known, Goya was particularly fond throughout his lifetime and which he depicted in both his paintings and engravings. Lucas inherited this enthusiasm, reinterpreting diverse aspects of the sport in an absolutely personal language.

Indeed, Eugenio Lucas’s bullfighting scenes are some of the most significant works of his entire career. However, few are of the size and display the almost panoramic treatment of this attractive painting, which illustrates the tragic moment when a bull attacks the bullfighter, whose gored body lies by the animal’s front legs. The scene takes place during a bullfight in the spacious square of a small village of poorly built, rundown houses next to a poplar grove, whose svelte outline is silhouetted against a clear sky crossed by clouds.

In accordance with the tradition still preserved today in some Spanish villages during the local celebrations, running around the outer edge of the square is a fence of wooden stakes and planks used as makeshift seating, behind which a few spectators who had rushed into the ring to join in the bullfight now hurry for shelter. Meanwhile, other assistant bullfighters attempt to distract the bull with their cloaks, and a group of volunteers, protecting themselves with a cart, approach the bull to try and get it away from the victim using long poles. On the far right, several men hold the limp body of another volunteer, who was most likely also gored during the bullfight.

The painting, signed in Madrid in 1855, is from the most accomplished mature period in Eugenio Lucas’s artistic career. It is a good example of how this artist interprets the extreme drama – a combination of cruelty and defiance of death – that defines the deepest essence of the spectacle of bullfighting, which was logically a theme particularly akin to the Romantic spirit. Indeed, Lucas locates the main figures in the middle of the empty bullring as the epicentre of the dramatic tension, to which the small figures that populate the whole scene react with terror. They are loosely sketched using vibrant, supple strokes, often no more than dabs of colour executed with extraordinarily free brushwork that purposely shuns the precision of drawing in favour of greater intensity of expression.

The acquisition of this painting furthermore marks a very significant contribution to Lucas’s output as, despite its importance and the decorative purpose of its large format, it has remained practically unpublished until now and is preserved in excellent condition, allowing us to appreciate the full intensity of the energetic and temperamental personality that defines this artist’s entire oeuvre.

Of Eugenio Lucas’s very many bullfighting scenes, the design of the setting and composition of the present work bear a particular resemblance to those of La gran capea (“The Great Bullfight”) signed in 1860, La capea (“The Bullfight”), Escena de toros (“Bullfighting Scene”)3 and the gouache Toros en la aldea (“Bulls in the Village”).

The National Museum of Fine Arts in Havana owns several works by Lucas that also depict rural bullfights and are similar in theme and setting to the present work, such as those entitled Gran corrida de toros y cucaña (“Great Bullfight and Greasy Pole”) signed in 1856, El toro del collar (“Bull with Collar”) of 1863 and Capea en un bosque (“Bullfight in a Forest”), painted in 1861.

Goring at a Village Bullfight