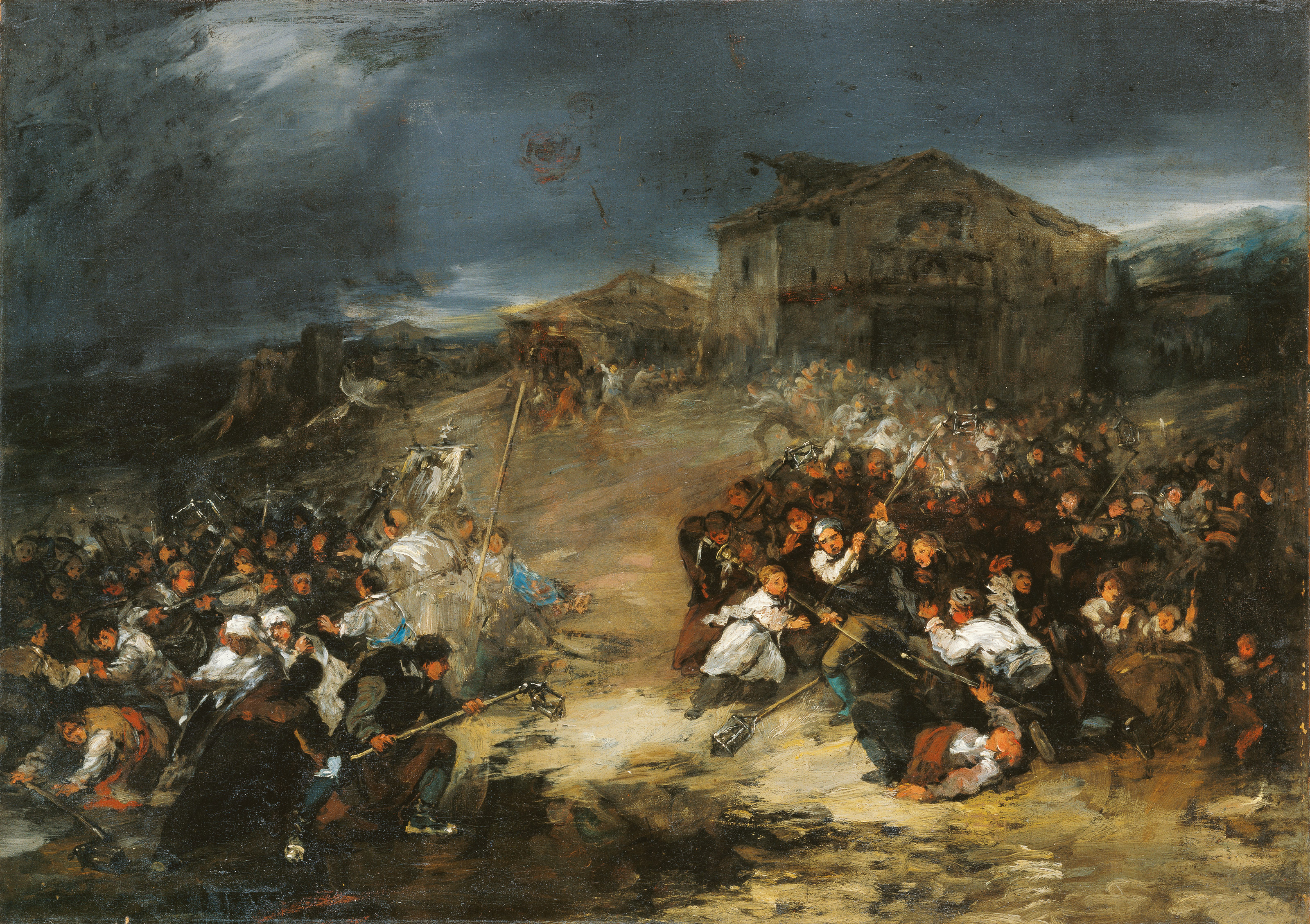 In the clearing on levelled ground on the outskirts of a town, the brotherhoods of two Dawn processions engage in a violent struggle to assert their preferential right of way in their respective itineraries in the dark of night, barely lit by the first glimmer of daybreak. Faithful, acolytes and penitents fight tooth and nail, brandishing as weapons their lanterns and banner poles, with which they mercilessly threaten and beat the members of the intruding procession.

Rosary processions dedicated to the Virgin are among the devotional practices most deeply rooted in Spanish religious tradition and were held until fairly recently with great fervour and large followings, nearly always at dawn or nightfall. The members of the brotherhoods carried the standards of the various Marian congregations flanked by rows of lamps and candles, as a result of which they were commonly known as the “dawn Rosary” or “glass Rosary” processions.

This painting illustrates an episode with almost legendary connotations that was very common in popular tradition, especially in Andalusia and Madrid, and gave rise to one of the most recurring Spanish sayings, “acabar a farolazos, como el Rosario de la aurora” (“to end up coming to blows [lit. with lamps], like the dawn Rosary”) referring to a dispute or violent fight. It is only logical to think that Eugenio Lucas would have taken this picturesque episode from the tradition of his native Madrid where it is set – precisely in the street called Calle del Rosario, which still exists, next to the monastery and basilica of San Francisco el Grande. According to the tradition: “This street was reached through a gate of the old church of San Francisco, through which the very famous dawn Rosary procession departed. It seems that the hospital or college of Santa Catalina also had a Rosary brotherhood and that once, when they met in Calle de los Remedios, which was narrow (now the Plaza del Progreso), a question had to be settled over who had right of way. The members of the brotherhoods came to blows, using as weapons the exquisite lanterns they were carrying, and it turned into a brawl and disturbance that only the Walloon guard managed to bring under control. On learning of the happening, the royal court judges informed the Council, which put an end to the procession.”

As is evident, Eugenio Lucas again turns to Goya’s many processional scenes in which the brilliant Aragonese artist always stressed the most dramatic aspects that crudely reveal the extreme – and sometimes truly disturbing – behaviour which characterises such public expressions of devotion that are so typical of Spanish religious life even today.

In this case, however, Lucas focuses on creating a particularly anecdotal landscape shaped by popular culture which, precisely for its curious and picturesque nature, was so much to the liking of Spanish Romantic artists and clients during the reign of Isabella II. Such scenes would also enjoy great success in Sevillian painting of the last quarter of the 19th century, particularly in works by José García y Ramos (1852–1912), who gave particular fame to this episode in the several known versions he produced on the theme.

In the present work Eugenio Lucas attempts to emulate Goya’s aesthetic as faithfully as possible, as indicated by both the palette and the extraordinarily energetic and casual execution of the whole composition, in which most of the figures are barely sketched. This helps emphasise the confusion of the violent scene, which masterfully captures the dramatic tension and frenzied movement of the uncontrolled masses in the throes of their battle. But what is particularly interesting is Lucas’s interpretation of the landscape, as he places the groups of members of the brotherhoods on either side of a very broad foreground space outside a prominent, vaguely executed group of houses whose imposing outline is silhouetted against a sky dotted with black clouds; all these aspects, clearly borrowed from Goya, heighten the dramatic overtones of the scene, which is rendered in a vigorous, extraordinarily loose technique with generous use of impasto, although these effects were considerably lessened after the canvas was lined.

Proof of the success these scenes of interrupted processions enjoyed among Lucas’s clientele is the existence of other known paintings attributed to the artist with a very similar theme and composition, such as those entitled Resbalón inoportuno (“An Untimely Slip”), Procesión en la aldea (“Village Procession”) Procesión atacada por un toro (“Procession Attacked by a Bull”) and Procesión con lluvia (“Procession with Rain”).