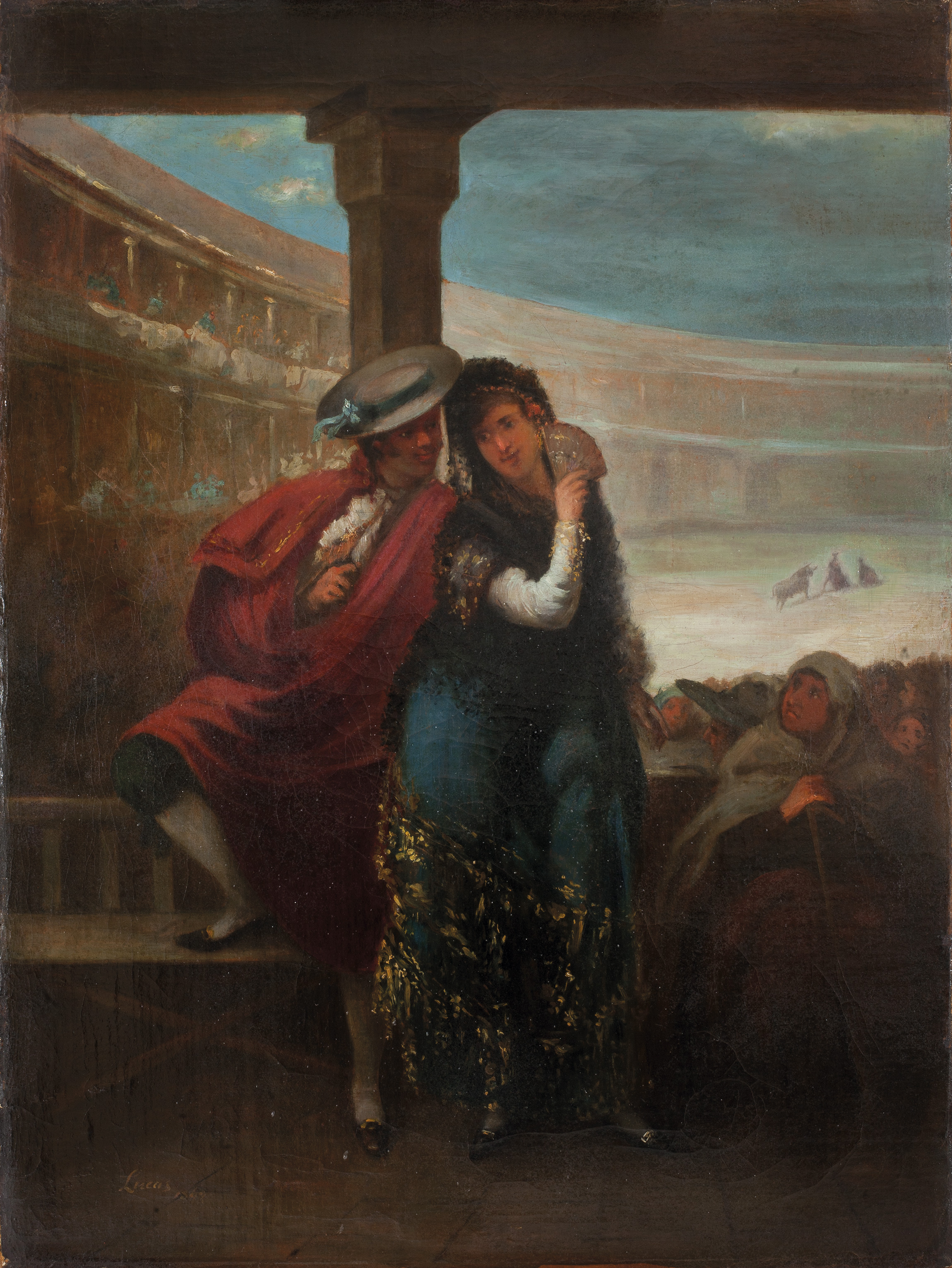 With Eugenio Lucas pictorial Romanticism found one of its most enthusiastic supporters, especially regarding the development of what historiography has called "Madrid genre painting". A cabinetmaker by profession, he discovered a vocation as a painter late in life and began attending the Academy, where he evidently found the scant instruction he received of little interest. Lucas preferred to base his pictorial world on repetitive (one might say almost compulsive) copying of the masters he was able to study at the Museo del Prado – in this respect mainly Velázquez and Teniers but above all Goya, who inspired the painter with true devotion and was clearly a guiding light in his work.

Despite not taking the normal path via the academic and institutional channels, Lucas quickly made a name for himself in Madrid. His first canvases are documented in 1841 yet in only a few years his career became consolidated. In a relatively short time he achieved a number of noteworthy objectives, as for example the execution of the tempera decoration of the Teatro Real opera house ceiling in Madrid, appointment as an honorary court landscape painter and distinction as a Knight of the Order of Charles III. In 1855 his prestige further increased with favourable reviews for the two paintings he had sent to the Paris Universal Exhibition and a commission to value Goya's Black Paintings. A large clientele ensured Lucas a more than comfortable financial situation until the overthrow of Isabella II, when most of his former patrons went into exile with the queen. His travels through various European countries (and possibly even Morocco) and his friendship with Édouard Manet add the finishing touches to any description of his character. Lucas must also have been a man with a strong personality, tremendous courage and deep sensitivity.

After his death in 1870 he was forgotten by the critics until the early 20th century, when his memory was revived by the collector José Lázaro and the painter Eugenio Lucas Villaamil, Lucas's son from an affair with Francisca Villaamil.

Lucas was above all a great observer, a painter constantly in search of the light, volume, colour and motion pervading the world around him, a dynamic reality he strove to capture, avoiding the linear precision of drawing as he felt that it constrained him. His remarkable versatility and restless nature spurred him to address very disparate issues and techniques through the exploration of a wide range of genres, from the more classical, such as allegory or still life, to other, basically more Romantic ones like portraiture, landscape, interiors, political and religious satire and Orientalism. However, most representative of his oeuvre is genre painting, his favourite themes in this respect being the corrida, as rendered in the form of amateur and professional bullfights illustrating every possible movement or pass. Nevertheless, analysis of his bullfighting production as a whole reveals that his true interest lay not only in the spectacle itself but indeed in all that surrounded it. As this canvas proves, he paid special attention to the kind of folk attracted to that world.

Although documentary evidence exists regarding Lucas's participation in the Academy's 1841 exhibition, the four works he entered have either not survived or have never been identified, which makes Majo and Maja (also entitled Majos in Spanish) together with The Bandits (both dated 1842) his first known signed pictures. This painting, which is considered the first evidence of the beginning of his career, contains many of the elements that appeared as constants in his painting.

Here the first things to draw the eye are the cloudscape and the interplay of contrasting planes of light providing the work with depth and movement. The gloom in the foreground also captures the attention through the vibrant colours used to depict the couple in the courtship scene. The large area of red surrounding the beau serves to highlight the figure of the maja and the traces of gold on her shoulders, sleeves and skirt. The space behind them containing the old procuress and part of the crowd is shadowy and thus brings depth to the picture, while the indistinct white sand in the ring, the boxes, and the sky in the background provide clarity rendered through a bright palette whose uniformity is broken by delicately applied blues.

The Manolo and Majo types, inspired directly by Goya (also known as the genius of Fuendetodos), are central to all of Eugenio Lucas's work. He always highlighted their most picturesque and anecdotal aspects through scenes of flirting, trysts, courtship and flattery, for such characters with their postures and gestures are fully consonant with the artist's constant concern for the same factors: light, colour, movement, narrative and, ultimately, expression.