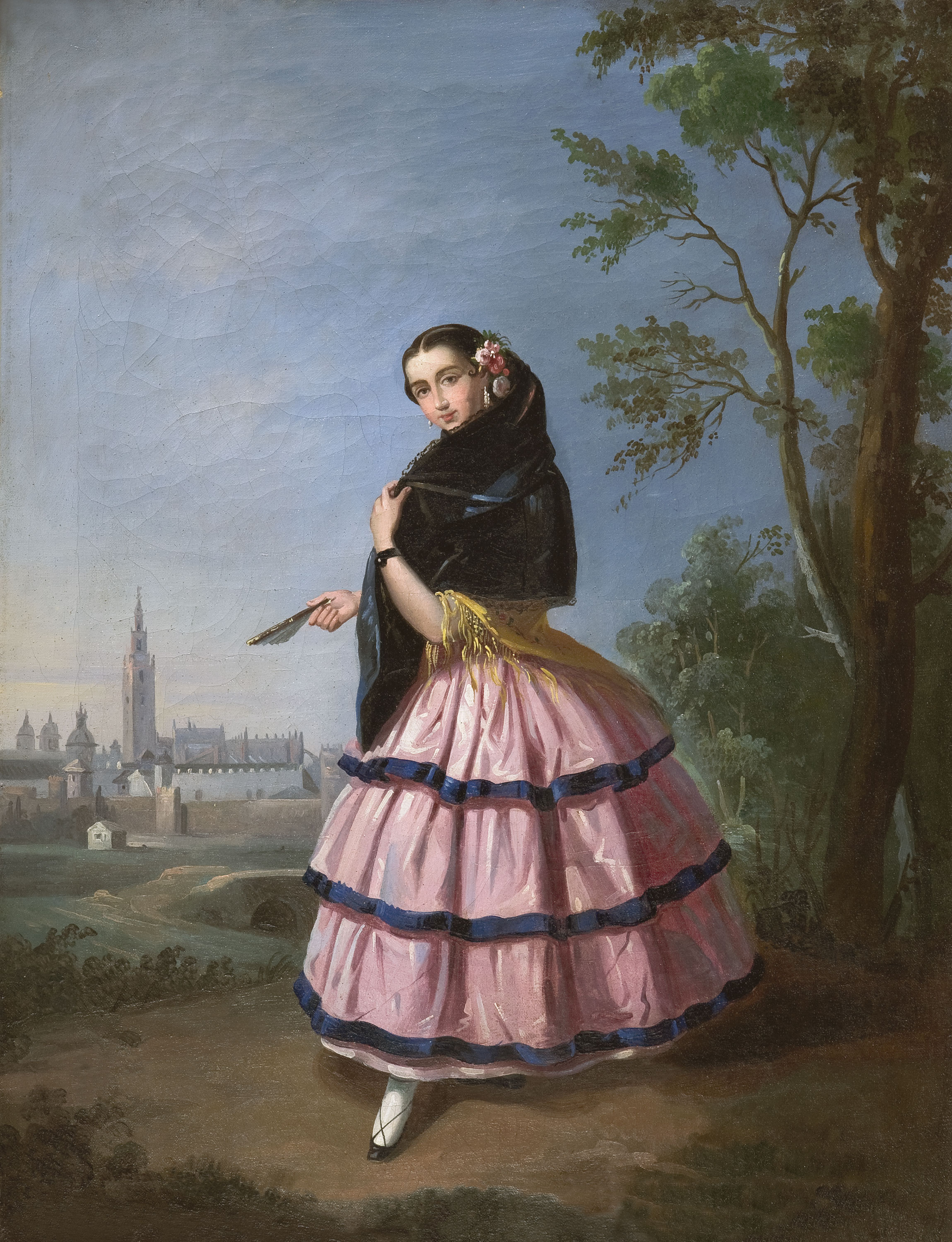 The physical appearance of the figure in this painting and the landscape behind him clearly indicate that this is a painting of a Seville majo on the right bank of the River Guadalquivir. Given the geographical position of the Gold Tower, it can be deduced that the handsome and elegant fellow captured by the painter stands opposite what was then the end of the Paseo de las Delicias boulevard.

The prototype of the Seville majo as he appears in Sevillian Romanticism was depicted by José Bécquer in a lithograph of the Seville Fair which was included in Álbum sevillano, edited by Vicente Casajús in 1839. As early as 1832, when he painted his portrait of Richard Ford in typical costume, Bécquer had depicted the Sevillian male in an elegant suit of the kind worn on festive and other special occasions.

Before Manuel Cabral Bejarano painted this particular type of male, his father Antonio had also painted a majo as well as another picture, identical in size, of a maja. Indeed, there are pairs of paintings by the father in which the two figures stand looking at each other or dance a bolero in such a way that their gestures and expressions correspond perfectly.

It is therefore not surprising that Manuel Cabral Bejarano should also paint the majo and maja theme, as their prototypes, already established within Sevillian Romantic painting, were constantly in demand from local patrons and foreign visitors alike. Indeed, the living rooms of many newly built houses in Seville were adorned with typical local genre painting motifs, while Spanish and foreign travellers passing through Seville often bought paintings of this kind as agreeable, pretty and decorative souvenirs of their stay in that city on the Guadalquivir.

In this picture Manuel Cabral Bejarano's majo is a smart, handsome young man in a catite hat smoking a cigar. He wears a white shirt and a black waistcoat, although the thick black cloak covering most of his body prevents us from seeing the rest of his attire except for the knee-high boots. To the left is a small tree-lined mound and to the right the bank of the River Guadalquivir with the Seville skyline suggested in the background and the Gold Tower clearly visible before it.

Due to the characteristics of its style this painting can be dated around 1850, at the beginning of Manuel Cabral Bejarano's career as an artist and when he worked for his father Antonio.

Seville Maja was painted as a companion piece to the Majo and can be similarly dated. The two figures are painted in such a way that their gestures and poses match harmoniously. This kind of female figure can be seen in Sevillian Romantic painting in a lithograph by José Bécquer of 1839 also reproduced in Álbum sevillano, edited that same year by Vicente Casajús.

This composition features a beautiful young woman, elegantly attired in a festive daywear dress which possesses all the grace and beauty of the popular fashion of the time. The upper part of the Maja's body is covered by a large shawl, although beneath it, at the waist, the fringes of another, embroidered shawl can be seen. From the waist down, she wears a pink skirt with flounces adorned with three horizontal blue trimmings, white stockings and smart black chapines held by leather ribbons. She has a fan and her hair is adorned at the temple with roses. Her gaze appears to respond to the attention paid her by the majo in the other painting.

The landscape in the background also appears to match that in the previous painting, with the maja on the river bank and a small arched bridge over the Tagarete tributary just before it joins the Guadalquivir in the middle distance. Visible in the background are the city walls, with the outline of the cathedral and the Giralda tower rising above them. Three domes belonging to religious buildings can also be seen to the left. To the right behind the maja and painted with verve and vigorous, energetic brush strokes are clumps of trees, which again complement the vegetation on the left in the scene with the majo.

These two figures possess the purest essence of Sevillian popular Romanticism and are paradigms of the physical types representative of the city which were soon to enter the category of "typical" on the one hand but "clichéd" on the other.

Manuel Cabral Bejarano was among the painters who did the most to help disseminate those aspects characteristic of Sevillian genre painting by creating a repertoire reflecting the motifs which travellers arriving in the city saw and wished to keep as mementoes of a particularly unique and attractive world.