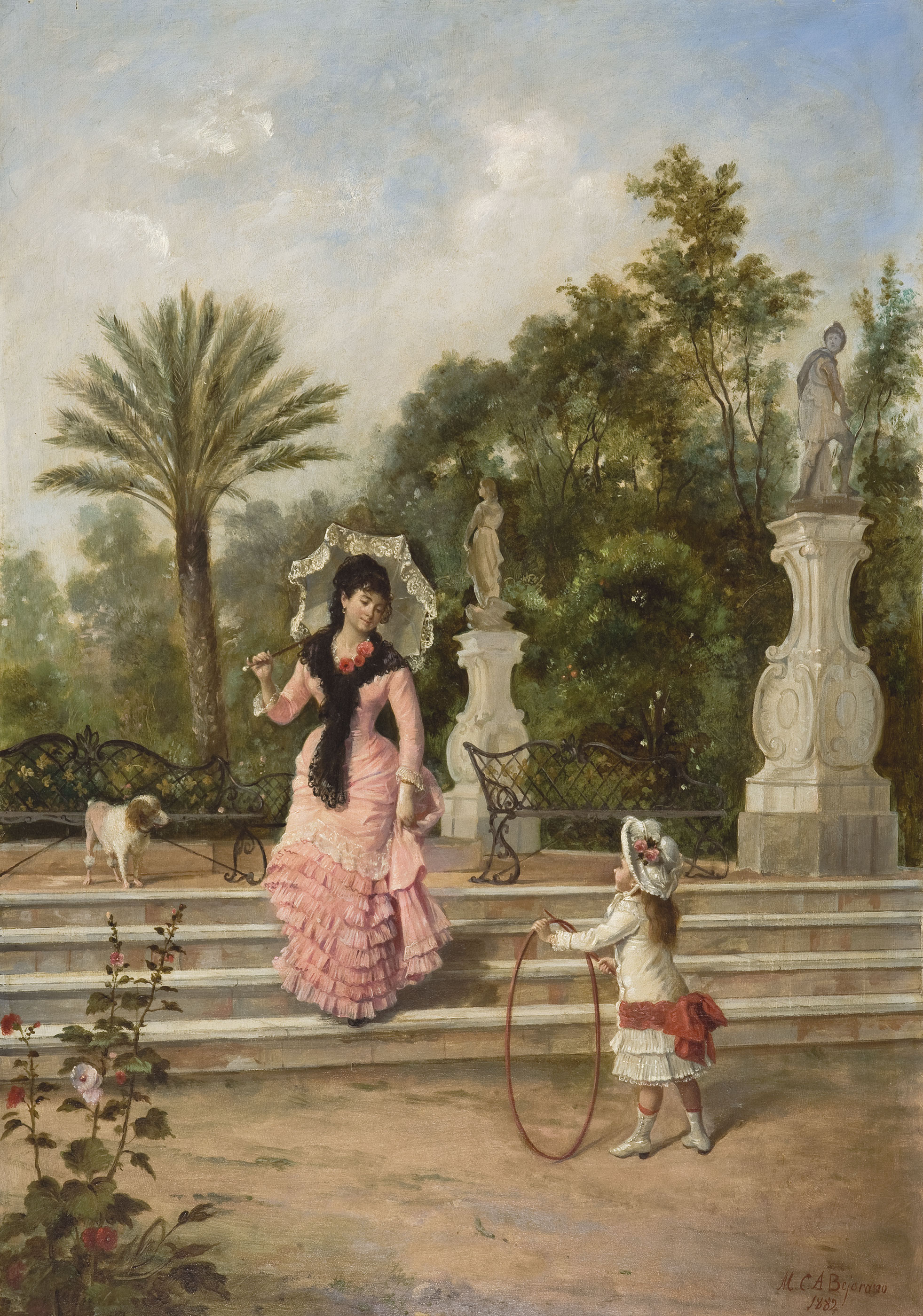 Playing in the Park

Manuel Cabral Bejarano signed and dated this clear prototype of the specific kind of painting he developed towards the end of his life only a few years before his death in 1891. Decades before, he had been among the most characteristic painters of Sevillian Romanticism and one of the most representative artists of the period between 1850 and 1865. But after the reign of Isabella II, the Romantic spirit began to wane all over Spain, and particularly in Seville from 1865 on, artists used realism to depict episodes from day-to-day life, something which lacked the charm and poetics of previous periods.

All this is clearly reflected in Manuel Cabral Bejarano's late production, and nowhere more than in this painting featuring a smart young mother playing with her small daughter in a park which could well have been inspired by Seville's Cristina Gardens. Here, with his customary compositional skill the artist used a flight of steps as a central motif dividing the scene in two and there placed stylised figures of the beautiful young woman, who looks at her daughter with pleasure as she listens to her. She wears a pretty pale pink dress with lace frills, a black mantilla knotted around her shoulders and holds a parasol to keep off the sun. In this way the artist created a motif which centres the composition and is distinguished by its refinement and sense of the exquisite.

At the foot of the steps the girl looks up at her mother as she plays with a hoop. She wears a charming dress with a rather flamboyant red bow and a pretty little hat. A small dog gazing at its mistresses from the top of the steps completes the scene. The three figures interrelate perfectly in a well-arranged distribution. It is interesting to note the artist's attention to detail vis-à-vis women's fashion of the time; his faithful reproduction of the dresses reveals that mother and daughter belong to the late 19th-century Sevillian upper class.

Also very interesting is the upper part of the picture with a palm tree rising above a background of lush vegetation. The Cristina Gardens led out to the Paseo de las Delicias boulevard and contained statues on tall pedestals which added considerable elegance and distinction to the scene.

Thirty years had passed since Manuel Cabral Bejarano had been among the foremost exponents of the bright and colourful trend known as Sevillian Romanticism. Although he had grown up overshadowed by his father, Don Antonio, who was regarded as the "patriarch" of that pictorial style of the city on the River Guadalquivir, Manuel had succeeded in interpreting the essence of Sevillian life through scenes in streets, homes, taverns and eating-houses, in elegant dance halls and casetas at the Seville fair, and at solemn processions, christenings and scenes from popular plays and operas. In short, Manuel Cabral Bejarano was the most representative artist of the second generation of Sevillian Romantic painters whose legacy took the form of canvases which served as admirable and delightful reflections of Seville life. However, by 1882, when he signed this scene of a Seville park, that pleasant, Romantic world was gone forever.

Playing in the Park