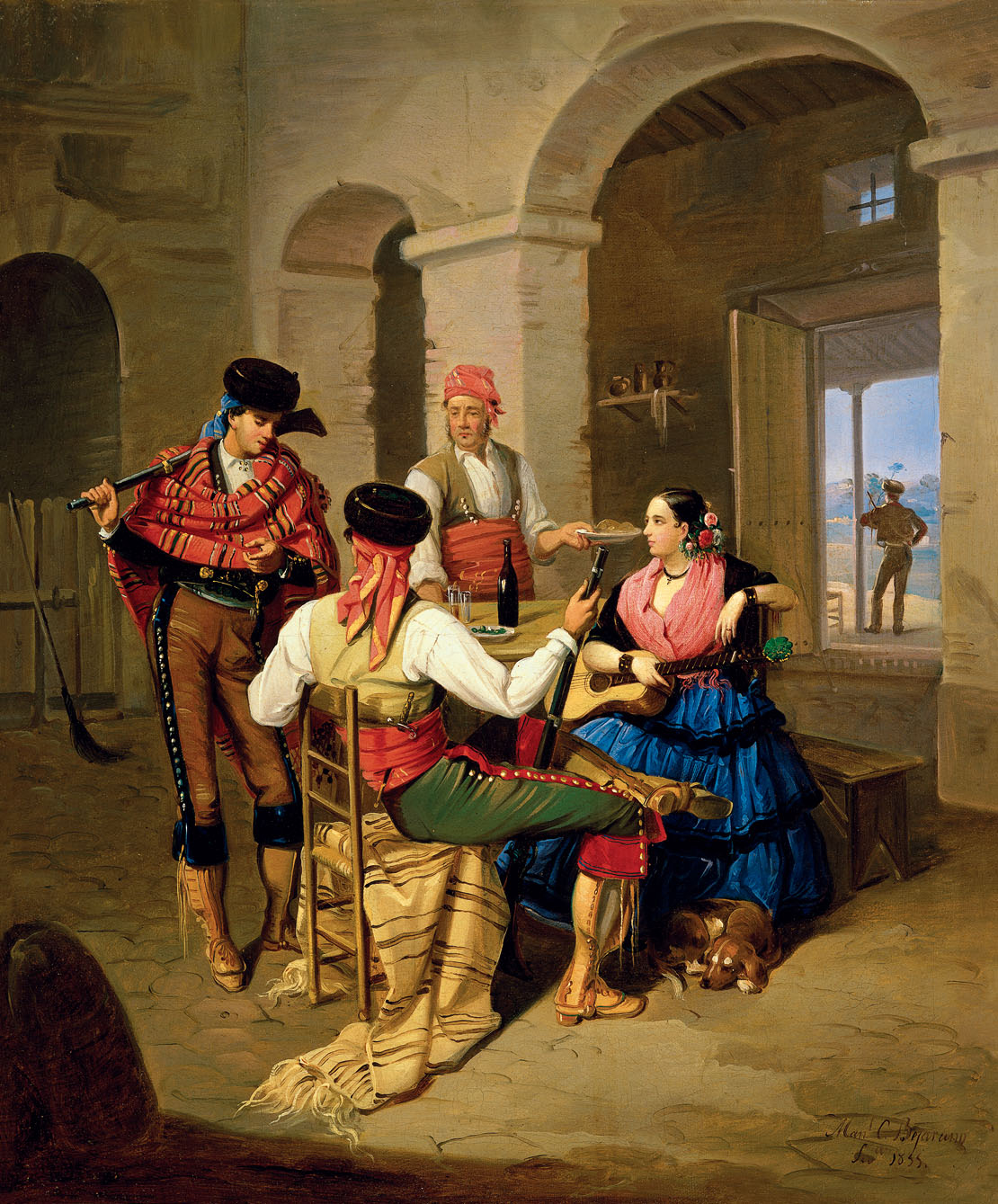 Scene in a Country Inn

The travellers, richly attired in the fashion of Andalusian majos, are no doubt smugglers, as they are armed. One of them appears to be keeping watch in the porch of the inn and lurking in the semidarkness of the foreground are some bundles. The traveller who is standing wears chestnut-coloured edged chaps with dark blue velvet turn-ups to match the short jacket with gold buttons covered by a striped blanket. The other man, sitting on his own blanket, is dressed in a waistcoat and red cummerbund, visible in whose folds is a knife. They both wear leather gaiters which are unfastened and reveal their legs. Their heads are covered with handkerchiefs which protect them from the dust of the road and peep out from under their felt hats. The maja, whom they have asked to play the guitar, wears a blue dress with black edging, matching choker and bracelets and flowers in her hair. The innkeeper, standing by a table with a small dish of olives, two tall wineglasses and a bottle of Manzanilla or Amontillado sherry, carries a plate of stew.

The work belongs to the best period in the painter’s career. It denotes an interest in capturing an interior setting through the skilful use of architectural elements, also found in other works by the artist in this collection. This leads him to depict the lobby beyond the main room in the inn, separated by an obliquely positioned arch, and beyond it the porch that looks out onto a luminous landscape. The painter places an object in each of these spaces – the chair in the porch, a shelf with a plate, bottle and copper pitcher in the lobby, and a broom in the foreground – to create an overall atmosphere and an impression of naturalness that is only marred by the slightly affected pose of the left-hand figure.

The composition is in fact based on a drawing by José Domínguez Bécquer, lithographed (in reverse) by Adolphe-Jean-Baptiste Bayot for the third book of España artística y monumental (Paris, 1844) edited by Genaro Pérez Villaamil. This is evident from the position of the figure with his back to the viewer and the similarity of the architectural interior, even though the figures are much more numerous. This lithograph enjoyed a certain amount of success, as at the end of the century it was the basis for a few oil paintings, such as one by José Fernández Alvarado in the Bellver Collection in Seville. The title of the print, Los ladrones en una venta (“Thieves at an Inn”), is indicative of the livelihood of the figures, although in the present work they are smugglers, an occupation that enjoyed great prestige in Andalusia at the time.

At least one variation on the theme is known. It resembles the present work in the architecture and angle of vision and features similar figures, especially the two who are seated. Interiors of inns and taverns were very common subjects in Andalusian painting. Joaquín Domínguez Bécquer painted a picture that same year, 1855, featuring a large number of figures, and Cabral himself explored this theme on other occasions. Depictions of smugglers are also very common. This work is a good example of the fashion, especially among English customers of the day, for interiors populated with characteristic figures. Indeed, this work must have been purchased by a client of that nationality, judging by the label it preserves in English indicating that it was acquired in Seville the same year it was executed.

Scene in a Country Inn