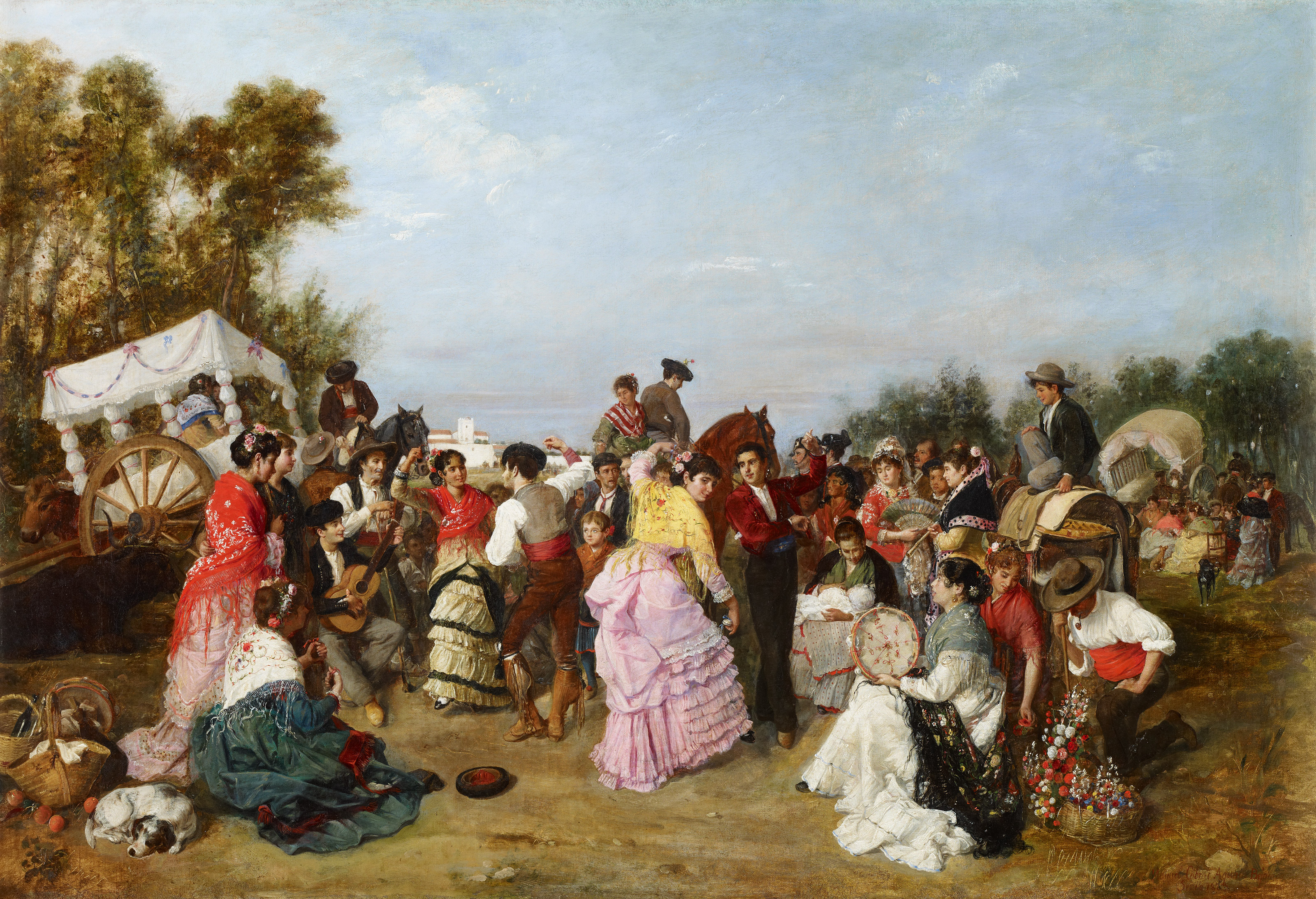 At the Torrijos Pilgrimage

The painting shows the romería of the Santo Cristo de Torrijos, the most important of the Aljarafe district. In it the romeros make a pilgrimage from Valencina and other nearby villages to the shrine where the Christ is worshiped on the Torrijos country estate beside the road leading from Valencina to Salteras. The pilgrimage dated back to 29 September 1600, when an image of Christ at the column was discovered. It was celebrated on that date, the feast day of archangels Michael, Gabriel and Raphael, until 1923, when it was moved to the second Sunday in October.

This painting is from the last period in Manuel Cabral’s production, which is characterised by extreme refinement of colour often combined with a certain amount of affectation in the figures’ poses. As in other works by this artist, there are many figures distributed around two couples who dance to the music of a guitar and tambourine, accompanying them with castanets. The hat on the ground in the foreground shows how the dancing began, as it was the custom for a man to ask a girl to dance by tossing his hat at her feet, which is what the hatless majo in the centre must have done. The pilgrims, whose lavishly decked out carts are visible on the left and right, have stopped off on their way to the Torrijos estate, which might be the farmhouse visible in the background. Seeking variety, the artist features different human types, including the riders who dominate the composition, a woman breastfeeding a child, several peasants, a gypsy woman and two civil guards, as well as numerous young people of both sexes, and attempts to give them all an endearing, cheerful expression. The dancer in the centre steals a mischievous glance at the spectator. The female figures, richly attired in dresses with frills and flounces, embroidered shawls and earrings and wearing roses in their hair, are particularly beautiful. The scene is framed on each side by a still-life arrangement and a basket of flowers, which are part of the setting. The array of still-life on the left beside the dog features foodstuffs in a wicker pannier and a basket of plaited esparto. The flower arrangement is a branch or bunch of foliage for an offering to which the young woman with the red shawl is still adding flowers. The careful execution and exquisite colouring give an idea of the properties of the different fabrics. On the ground, where sgraffito or scratched effects are found in the lower right areas to simulate the dry grass, the execution is very loose, as in the trees on either side of the composition.

The work, signed in 1883, was one of the two the painter sent to the National Exhibition of Fine Arts the following year, where it failed to arouse the interest of the main critics or attract the jury’s attention. Although all he achieved was three honorary mentions in 1858, 1860 and 1867 and always missed the medals, Manuel Cabral Bejarano regularly showed his works at the National Exhibitions of Fine Arts in Madrid from 1858 to 1890. In fact, he entered a painting on the same theme, but larger in size than the present work, in the exhibition of 1890.

At the Torrijos Pilgrimage