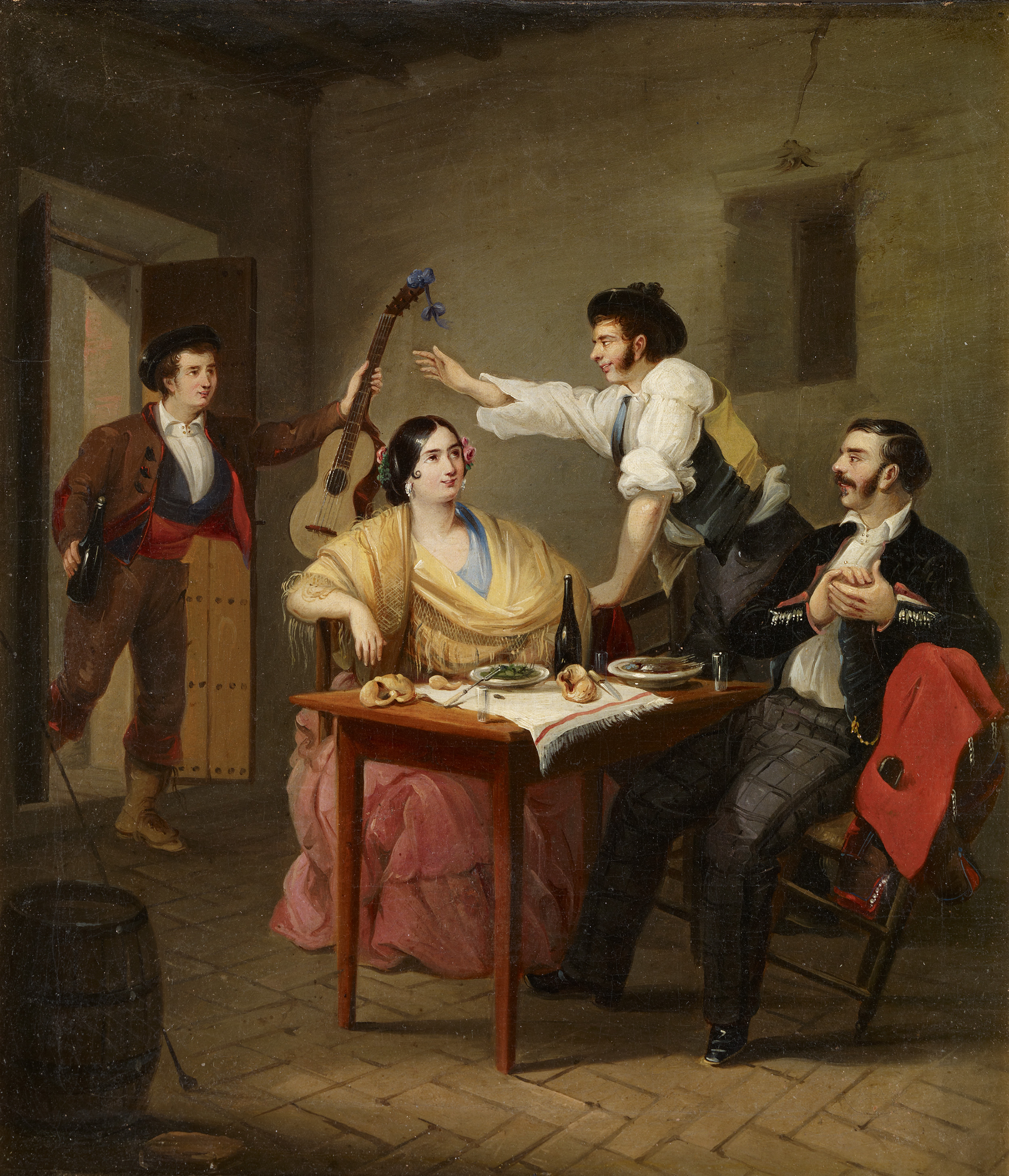 Singing at the Table

Some Romantic genre scenes were painted in pairs. The works in question did not necessarily portray two episodes of the same story, although there was sometimes a slight thematic link. Such is the case of this loosely and sketchily executed pair of paintings with similar measurements and certain iconographic parallels, as they both refer to the process of the amorous conquest.

In the first, two strikingly dressed girls with flowers in their hair are out strolling in the park, away from the main path. They are met by a young man who flirts with one of them; she returns a coquettish glance. Bejarano thus becomes an indiscreet chronicler of the amorous practices of Romantic Andalusia and reveals the real reasons why young people went out strolling. As was customary, the girl approached by her suitor is accompanied by another girl – only low-class women, and even then not always, went out on their own – who acts as her friend’s accomplice, amusing herself by playing with the little dog to allow the courting couple greater intimacy. In the background, at a bend where the path disappears from sight, a group of finely dressed ladies and gentlemen are engaged in a lively conversation, forming a ring, while a majo and a maja advance towards the foreground. This conveys the idea of a busy avenue and indicates that the scene is therefore within the moral boundaries established by the society of the day. The setting is a poplar-lined boulevard, no doubt a recreation of one of the social gathering places of the day that satisfied the curiosity and filled the languid leisure time of strollers in the cities of Romantic Spain.

The companion piece is set in the private room of an Andalusian tavern – as evidenced by the small earthenware jar and serving ladle in the semidarkness of the foreground – where a young woman sits comfortably at a table accompanied by a couple of cart drivers, one of whom claps his hands while the other, in shirt sleeves, takes the guitar brought to him from another room to play. The remains of their snack are still on the table – herrings, olives, bread and Manzanilla sherry – and attest to how natural it was for eating to be followed by singing in southern Spain. The private nature of the premises contrasts with the public place depicted in the other painting, and the almost provocative forwardness perceived in the attitude of the tavern girl – who leans back, showing a generous amount of neckline – suggests that this is the culmination of a conquest or, perhaps, a situation that is even more frivolous by moral standards of the day.

Andalusian genre painting commonly used prototypes, which had been established earlier by printing in the popular collections of prints “of types” in which the costumes, poses and even situations of the main figures in both paintings are repeated. The figures of the two women strolling arm in arm and the graceful and elegant gesture of the attentive suitor in the first of the paintings are also found in the works of many other artists such as José Domínguez Bécquer and Manuel Rodríguez de Guzmán. The same is true of the group in the tavern, a scene often repeated with variations even in the works by Cabral in this collection. However, Bejarano’s female figures stand out and differ from the rest in their greater plastic definition, as the painter does not conceal his keen interest in his beautiful models, who are much more flesh and blood and convincing and unashamedly show their graceful feet or the lace of their petticoats, which peeps out saucily from beneath the frills on their skirts in the painting of the girls out strolling.

The typical beauty of Andalusian women was one of the clichés that was partly created by foreign travellers as a regional characteristic. Some, such as Théophile Gautier, described them in as much detail as they did the most interesting monuments of the city: “Their teeth, with a brilliance like those of a Newfoundland puppy, and very pointed eye-teeth, give the smile of the women of Seville rather a wild, Arab quality which is extremely characteristic. The brow is high, full and polished; the nose slender, with an aquiline tendency; the mouth brightly coloured. Unfortunately the oval of a face which begins divinely, sometimes ends at the chin in too sudden a curve.” But what truly fascinated the Frenchman was the Andalusian women’s feet, which are so brazenly exhibited in the first of Bejarano’s compositions, as if the painter shared the French traveller’s tastes: “Without any poetic exaggeration, one could easily find in Seville women with feet which could be contained in the hands of a child”, states the author. He goes on to say of their footwear: “These shoes are usually of satin, scarcely covering the toes, and seem to have no backs, for they are fitted at the heel with a little piece of ribbon of the same colour as the stocking.”

Singing at the Table