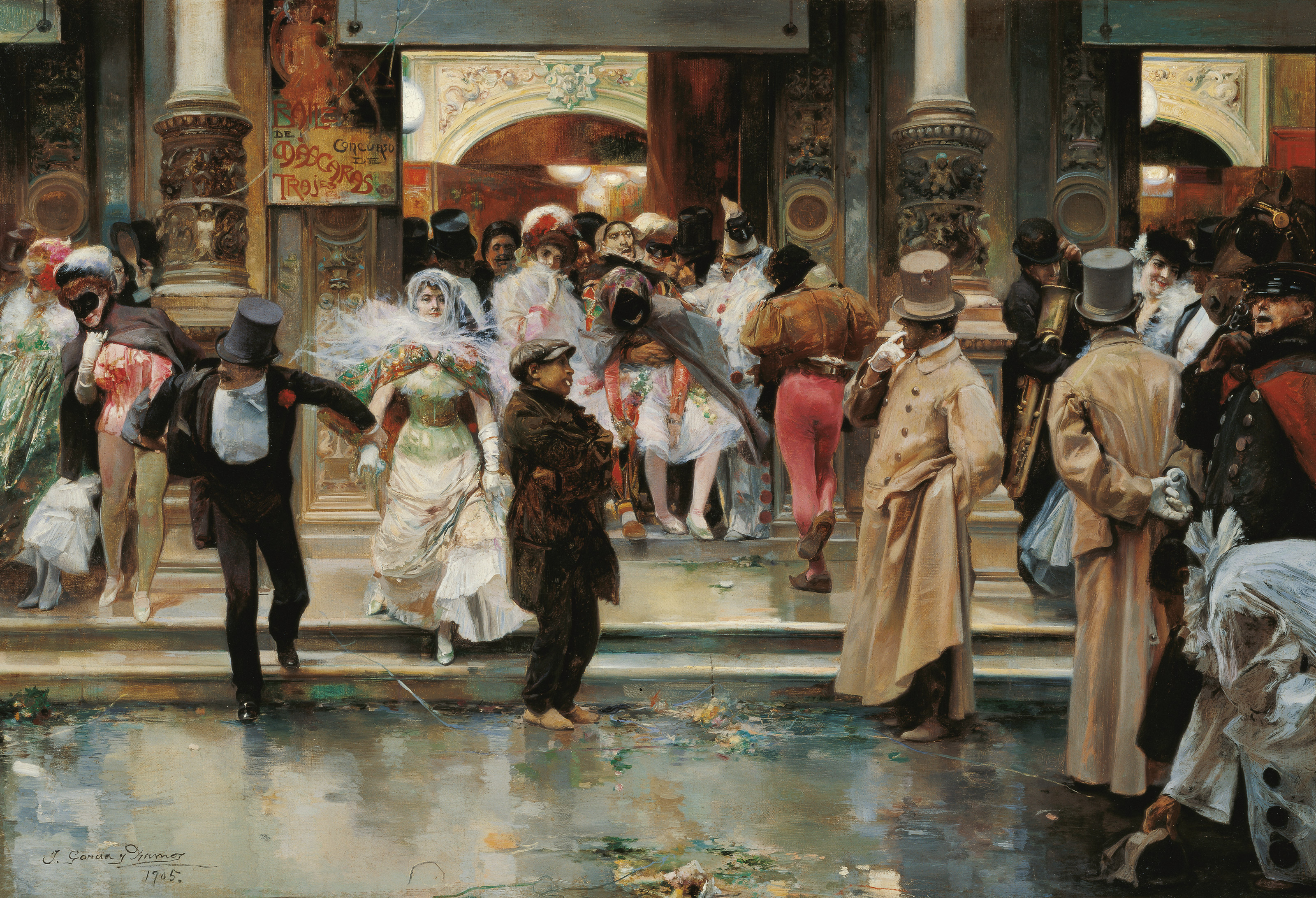 This canvas, which was recently sold at auction under the title Salida del teatro ("Leaving the Theatre") was presented by García Ramos at the Fourth Spanish Painting Exhibition, organised by José Pinelo in Buenos Aires in 1905, as Salida de un baile de mascaras, its current Spanish title. Without any doubt the first title chosen by the artist gives a more specific description of the subject. Nor is there any doubt that it is among the best paintings dating from the last period of García Ramos's life, by which time his name was well-known on the Seville art market and he had come to be regarded as one of the most prestigious Andalusian genre painters of the time. In her collection, Baroness Thyssen-Bornemisza holds another very important example of this type of work by García Ramos entitled Courting Spanish Style. In his final years the Sevillian painter – despite a certain loss of creative capacity and various family problems – decided to broaden the horizons of his painting, turn away from anecdotal themes (for which in any case there was little demand in his social environment) and depict the luxury and ostentation of the frivolous cosmopolitan circles of the great European cities during the Belle Époque. His main aim, however, was none other than to gain access to the international market (in this case in Argentina), where this kind of scene was beginning to prove successful with wealthier customers, to the point that a constant demand from the foremost European and Latin American art dealers existed.

This painting is an excellent example of the artist's new aspirations, particularly where the technical refinement of the execution is concerned, and it is definitely one of his best works. The draughtsmanship is particularly rigorous and meticulous, the colours elegant, the tones both bright and soft and the compositional balance correct, particularly in view of the large number of figures in the painting – a challenge of the kind which the artist was expert at resolving. The theme of the masked ball was a favourite with the Spanish artists of the last quarter of the 19th century and was mainly associated with members of high society. Painters saw in that genre the potential to produce decorative works with easily accessible themes and pictures reflecting the more outstanding aspects of late 19th-century social life.

This type of society event, characterised by the thrill of anonymity, took place in a context ideal for social ostentation and above all for falling in love and gallant wooing (with the subsequent malentendus), themes equally common in the literature of the age.

The Museo Carmen Thyssen possesses other important examples of this genre in paintings by Raimundo de Madrazo and Eugenio Lucas Villaamil entitled Leaving the Masked Ball and Arriving at the Theatre on the Night of a Masked Ball respectively. These are now joined by this exceptional painting by García Ramos which reflects the spirit of social gatherings of this kind. Strictly frontal and set out almost like a frieze, the scene depicts the moment when crowds of people are leaving a masked ball of the competition kind – a poster at the entrance clearly states: "Baile de máscaras. Concurso de trajes" (Masked ball. Costume Competition). Groups of participants come rushing out of the building through the huge doors. At centre, a woman in a costume seems to have fainted, perhaps nauseous from drinking too many alcoholic beverages, and an arm around her waist from behind keeps her on her feet. Meanwhile, a gentleman to the left descends the steps leading an elegant lady – perhaps his wife (who also seems to be looking absent-mindedly out at the spectator) – by the wrist. With his other hand the gentleman reaches out to a young woman – probably a conquest made during the ball – who looks back at him.

The artist added a note of social contrast in the depiction of these elegant figures with a fine example of his powers of observation and knowledge of the lower classes (one of his favourite themes). For instance, painted with keen realism and extraordinary immediacy, a young rascal with a cigarette in his mouth stands in front of the theatre in readiness to open the doors of the carriages when they pull up and earn himself a few coppers in tips. The surprised uniformed doorman looking at him nervously obviously regards this as competition. Behind the latter, a musician leaves the theatre, having finished work, and an old coachman, holding a horse by the bridle (and without a doubt one of the most interesting figures in the composition), makes his presence known loudly to potential customers still inside. Thus, in this painting far from depicting the activity of the crowd only, García Ramos included complete studies of each figure while establishing between them links of enormous subtlety which can only be understood through careful scrutiny of the scene.

This painting received very favourable reviews even during the painter's lifetime. One critic praised: "The observation of the figures, each shown by the painter without rigidity and with an appropriate expression, with no forced notes or affected conceptions, resulting in the successful creation of an attractive oil painting which has the distinction of revealing at each glance new qualities and subtleties in his brushes."

A preparatory sketch for this canvas with some variations exists which still displays the grid lines used to transfer the composition to the final version of the painting.