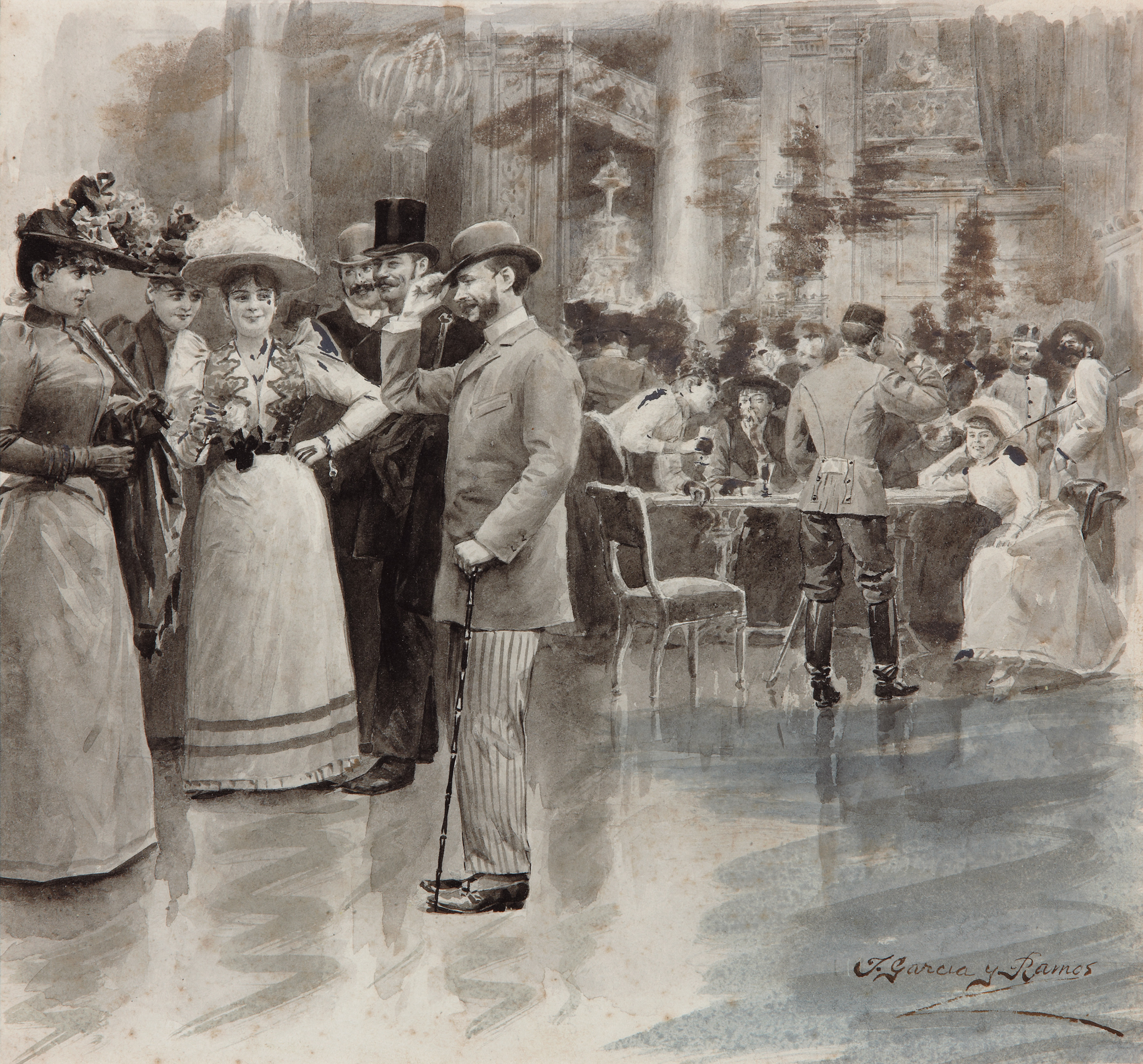 García Ramos is one of the most important exponents of Sevillian painting of the second half of the 19th century. Despite studying initially under Eduardo Cano, he completed his early training with José Jiménez Aranda, whose guidance proved decisive to his career as an artist and with whom he travelled to Rome in 1872. Like most of the artists of his generation who visited the Eternal City, García Ramos could not help but be influenced by the legendary Mariano Fortuny. After visiting more Italian cities, including Naples and Venice, he travelled to France, living for a time in Paris. In 1882, he returned permanently to Seville, where he became one of the most proficient exponents of “typical” scenes full of local colour, reflecting everyday life in the city in all its aspects: flamenco clubs and bars, taverns, local fairs, carnivals, flirting and courting, brawling, bullfighting, the Seville Fair, Holy Week, etc. Despite his preference for local themes (whose success was guaranteed), he turned towards other kinds of pictures featuring the contrasts in city life. This aspect of his work is reflected in his scenes with dances at night.

García Ramos was also a prolific graphic illustrator and contributed to a number of celebrated and widely-read magazines of his time, including La Ilustración Española y Americana, La Ilustración Artística and Blanco y Negro. He also produced posters promoting local festive events, such as that for the Holy Week celebrations and the Seville Fair in 1890, in these remaining faithful to the picturesque genre scenes that characterised his work. Among the books he illustrated, particularly important is Mas y Prat's Tierra de María Santísima ("The Land of Mary Most Holy"), per se a title greatly in harmony with expressions of his own pictorial work.

This painting from the Museo Carmen Thyssen Málaga depicts a courting scene in a public place and belongs to that period in García Ramos's production. As in his lively, carefree scenes of people leaving masked balls, the artist stepped back from his local and “typical” genre themes to illustrate the frivolity of city life that he himself had experienced during his stay in Paris. In this picture he depicted the atmosphere in a typical fin-de-siècle place of entertainment patronised by women, soldiers and civilians of middle-class origins. Although the scene is apparently worlds away from the flamenco scenes which brought García Ramos one part of his greatest success and popularity, it does display a similar approach and air of vitality.

In the main group on the left, three fashionably-dressed women in striking hats meet and greet three also fashionably-dressed men, two in bowler hats, the other in a top hat. The reason for the conversation or encounter is apparently connected with the idea of enlarging the group: the man and woman in profile seem to have been only recently introduced, while the others look on with smiles of approval. The whole scene is permeated with a certain veiled eroticism and postures and gestures indicative of a greater or lesser degree of familiarity with life. Other factors are the roguish looks of the men and the ostensible naïveté or carefree manner of the women. A suggestion of a tight corset beneath her gown makes the breasts of the young woman in profile, who is the prettiest of the three, look larger. The woman in the middle with her hands on her hips looks on and smiles smugly - as does the man in the top hat - as if she were the one responsible for introducing the two. The less attractive face of the third young woman is almost hidden and she appears to be shyer than the others, as does the man in the top hat, who gazes admiringly at the new girl.

By placing the main group in the foreground on the left, the artist invited the spectator to scan the painting diagonally. In contrast with the scene on the left, the atmosphere in the background on the right, which features women and soldiers around a table, is relaxed and less restrained, and the voluptuousness of these figures is much more direct. Particularly interesting is the girl leaning almost indolently across the table with the side of her head cupped in her hand in a pose that to a certain extent is a variation of the ubiquitous fin-de-siècle image of the prostrate woman. This smiling young woman looks out at the spectator as she listens to the innuendoes of the soldier standing before her.

García Ramos's use of wash with touches of watercolour for this scene attest to his total mastery of the technique of painting with water. In this picture the meticulous finish of the figures combines with the more watery patches in the foreground and background which suggest reflections in the floor and a stuffy atmosphere in the room. From the clothing and general tone of the picture, this work could be dated to around the middle of 1890 and may even be connected with illustrations produced by the artist for contemporary periodicals.