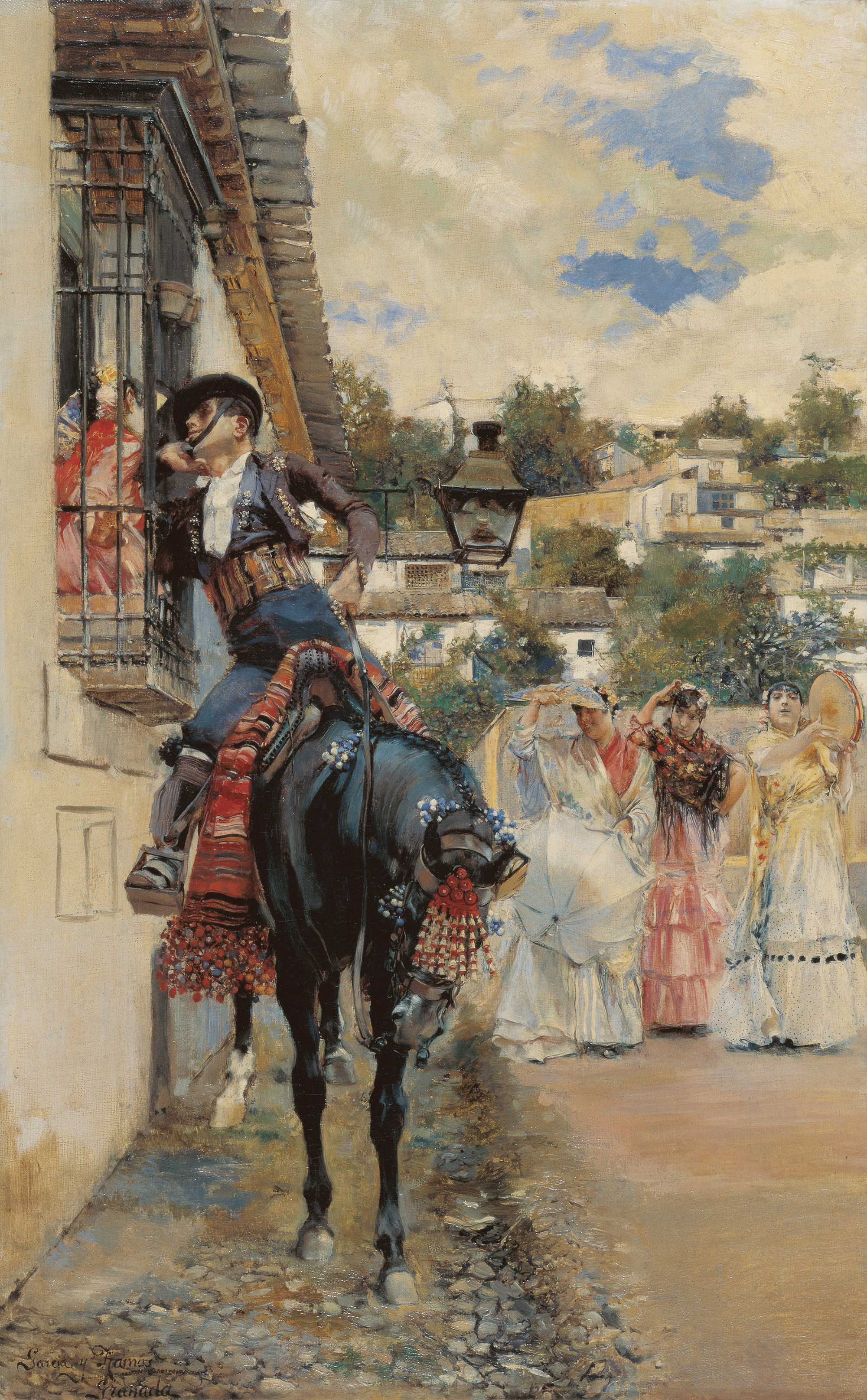 This picture, painted during a brief period García Ramos spent in Granada in 1883 and reported as unlocated for many years, is possibly one of the most famous genre scenes in an Andalusian setting of all those painted by this artist throughout his highly prolific career, in addition to being extraordinarily representative of his exquisite skills in this genre.

The painting has sometimes been referred to with the title Pelando la pava, a traditional Andalusian expression referring to the demure courting that went on between couples in interminable conversations during long walks or, as in this case, on either side of the window grille of the fiancée’s house. This barrier was impervious to any attempts at closer contact by the couple, who were nearly always vigilantly watched by friends or relatives.

The subject was addressed by García Ramos in other works, although they are a far cry from the compositional boldness of this scene. In the shade of a blazing afternoon sun, a dashing young man dressed in finery with a richly decked horse listens enraptured to his beloved, leaning on the grille of the window. The couple are taken by surprise by a cheerful group of women who grin at them teasingly. One of them lowers her sunshade to get a better view of the couple, using her fan to shade her eyes, while another adjusts the flowers in her hair and the third sings and plays her tambourine. In the background, peeping out from among the treetops, is a group of houses on a hill, which is identified as the well-known district of El Albaicín in Granada.

The scene evidences García Ramos’s particular skill at arranging the space of the composition; he situates the focal points of the scene on three different well-pronounced planes that lend the street depth and project the boldly foreshortened horse into the foreground. The group of the three young women is executed extremely delicately and exquisitely in bright, glowing colours, and achieves beautiful effects such as the face in semidarkness of the woman protecting herself from the sun with her fan, the gleam of the satin of the sunshade and the spots on the dress of the woman who plays the tambourine. Lastly, the group of houses and the sky attest to García Ramos’s talent for urban landscapes, which he painted on many occasions, although nearly always populated with figures. The decorative and anecdotal aspect of the scene, with emphasis on a type of local colour that was greatly appreciated by the clientele of the day, nonetheless does not conceal the painter’s technical mastery and precise, deft drawing that depicts with the particular, meticulous realism of a virtuoso the tiniest details of the various elements of the composition, which are splendidly set in a perfectly credible outdoor atmosphere captured through sketches made from life.

The two preparatory drawings by García Ramos in the Museo del Prado attest to the creative process of this painting. The first is a very quick, blurred and complex sketch in pen to tie in the main figures of the composition, although the background landscape is barely hinted at. In another sketch the artist studies only the group of the three women, although they are shown in a different arrangement, dancing and all of them playing the tambourine.

An engraving of the painting was reproduced on 8 March 1886 in La Ilustración Artística.