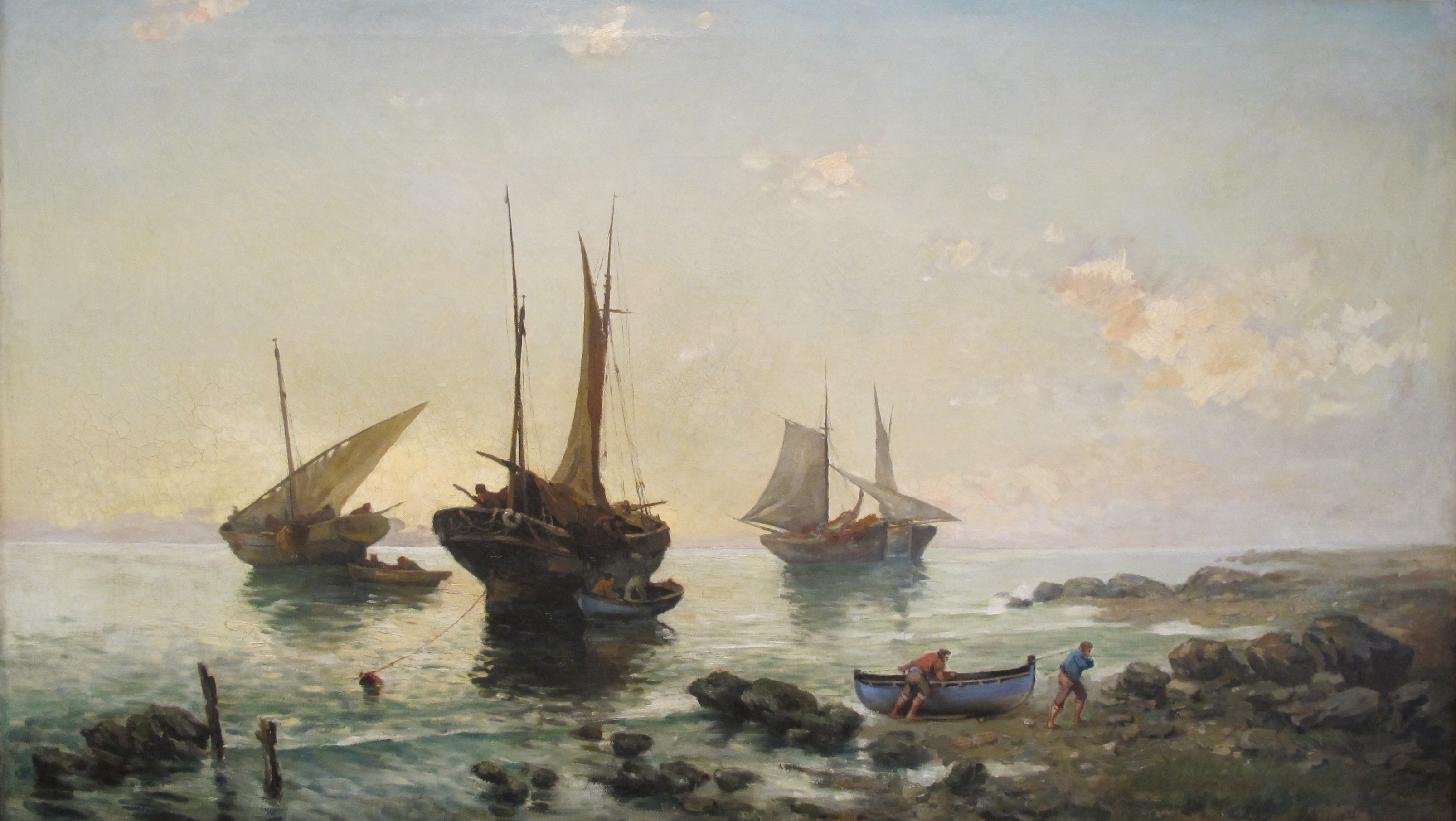 Emilio Ocón y Rivas was a pioneer, promoter and master of Malaga marine painting and a lecturer at the San Telmo School of Fine Arts. These facts do much to explain why the compositional aspects of his work and his renderings of seagoing vessels (which he recreated, due to his nautical knowledge, in such detail) were so often imitated.

Arriving from the Catch reflects various key factors in Ocón's work, one being pleine air painting, which was taught at Carlos de Haes's school in Madrid (where de Haes was principal) and is evident in this quiet late-afternoon scene depicting the everyday tasks in the lives of seamen.

This seascape also conforms to the general characteristics of Ocón's painting: in its oblong format with the horizon dividing the canvas into two clearly defined parts, the sky acting as a backdrop and the sea as a context for the main action.

The upper half, consisting of a clear, open space that illuminates the whole composition, offsets the abundance of masses in the lower half and is only interrupted by the vertical masts and position of the ships. In the lower area of the canvas, the water is both a mirror for the components of the scene and a source of radiance.

The rendering of the atmosphere in this painting clearly reveals the influence of Ocón's Flemish masters, whom he trained with when in the Netherlands on a grant from the Malaga Provincial Council to perfect his technique.

The focus in this composition is a sailing vessel, always a key element in Ocón's marine paintings. In this case it is a schooner, typically used for cabotage transport in the second half of the 19th century. The other two boats in the middle distance serve to accentuate the prominence of the schooner at centre.

To create a sense of depth, Ocón also included two fishermen dragging a buceta onto the sandy part of the beach in an area close to the lower right-hand corner of the canvas. This enabled him to compose a foreground that serves to highlight the vessel at centre, which he painted meticulously.

Colour, too, plays an important part here. Faithful to his realist style of painting, Ocón used it to achieve the power that is so evident in the composition. With a well-balanced palette, he created an interplay between cold colours – blues, greens and greys – and the warmth of the earth colours – ochres and magenta – mixing the pigments with great mastery. On some occasions he would play with the range of cold colours and on others blend blues and greens perfectly with warm colours to tone down the coldness of the surfaces. Ocón rarely used pure colour except for specific points on the canvas; when he did so he usually applied the paint more thickly to add a touch of vivacity.

The brush strokes are loose and so infuse the painting with a sensation of freshness. This is particularly evident in the sea, where the water, in constant motion, is both transparent and reflective.

As a pleine air artist who painted directly from life, Ocón made light a decisive component when transferring the landscape he saw before him to the canvas. Arriving from the Catch transports the observer to a Mediterranean coast in the late afternoon; a sea breeze creates an all-enveloping atmosphere that fades into the horizon, while the back lighting of the sun at the centre of the canvas silhouettes the outlines of the schooner.

In conclusion, like most of Ocón's work, this painting evokes a sense of nostalgia for the sea through an expression of the artist's unrealised seafaring vocation. Nostalgia yet at the same time idealisation since, in trading the hectic life of the sailor for the more placid and contemplative life of the painter, Emilio Ocón perhaps found spiritual equilibrium.