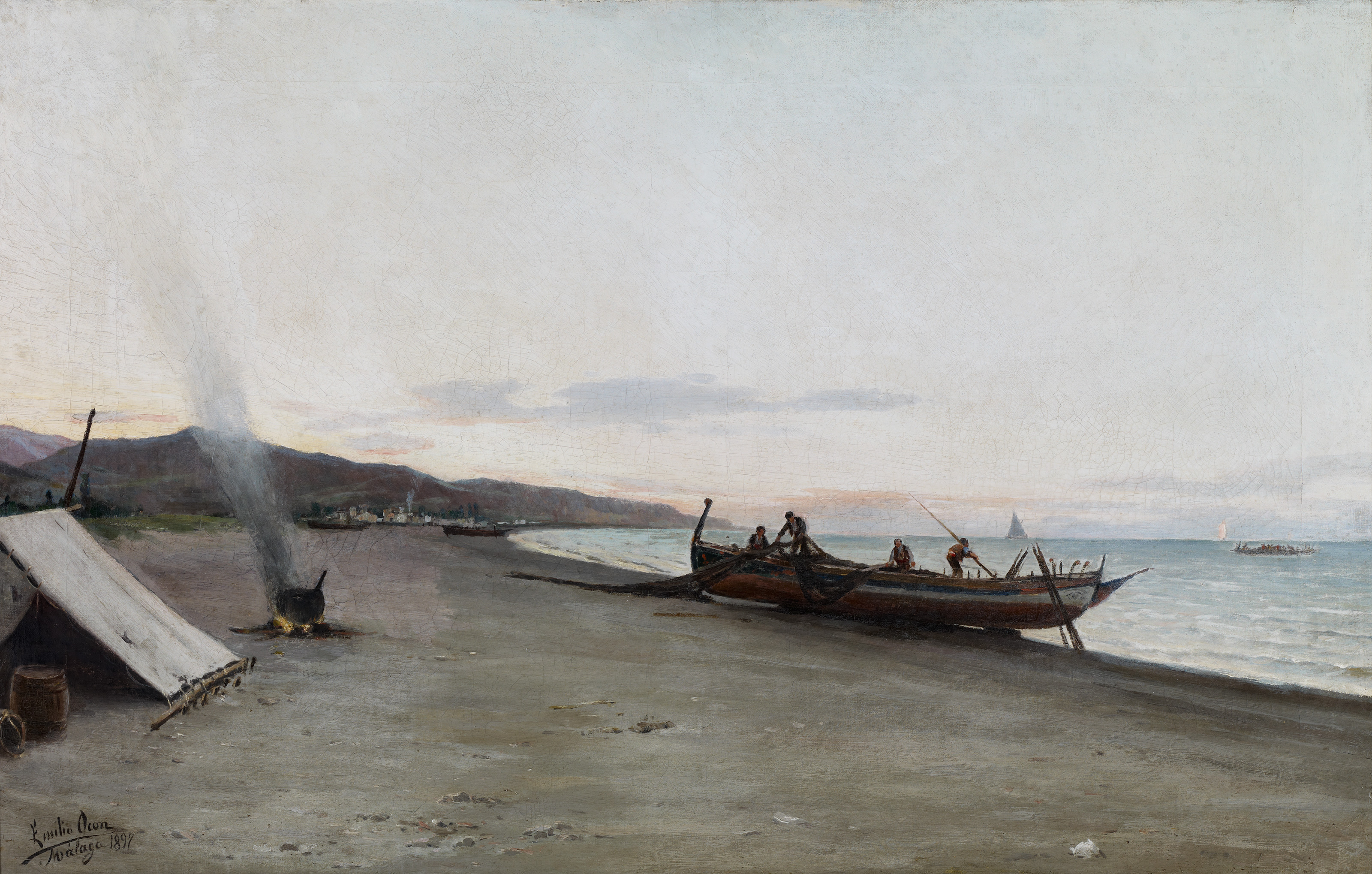 Preparing for the Catch

The fact that Emilio Ocón had lived in Malaga practically since 1873 did not prove an obstacle to him consolidating his way of working into a serious form of realism committed to his basic principles. For those who chose landscape as their preferred medium for expression, such principles meant working directly from nature and concerning oneself first and foremost with capturing the effects of light on forms. Furthermore, this had to be based on a faithful record of that light and on the colour ranges produced by those effects when combined with shadows and indispensable tonal gradations.

To this end he set up his workshop in the port of Malaga and from his window devoted himself to immortalising the Malaga coastline from different viewpoints. That is why Emilio Ocón's catalogue is full of views of Malaga Bay, generally with vessels, yet from barely varying angles.

In this picture, the artist looked towards the east coast, took up a position in the middle of the bay and recorded tasks connected with fishing, such as preparing the nets. Visible in the background is the El Palo quarter with San Antón hill rising up to the left.

Here anecdote mixes with regionalism based on the realism of details. The jábega, a typical local vessel of Phoenician origin, a mainstay of the local fishing industry and synonymous with Malaga, is placed at the centre of the scene and therefore becomes the focal point. The soft dawn light plunges the space into a poetic atmosphere reinforced by the calmness of the sea and the bareness of the beach. With a range of greys the palette contributes to that poetisation through which seascape is charged with emotional sensations – all intentions of producing a clinical record of an everyday experience being left behind.

Preparing for the Catch steps back from the customary discipline of constructing nature in terms of contrasts, firmness of contour and its expressiveness vis-à-vis atmospheric conditions. A point against it is that it merges brushstrokes in an attempt to combine the fixing of reality contemplated with the spiritual gaze typical of the end of the century.

Ocón was to move along that line, shunning the idea of disturbing the established order, always avoiding provocative positions. He maintained balance of composition by placing the horizon along the centre of the picture, focusing on the scene's main theme without disturbing that balance with other axes. The rising smoke from the cauldron brings some small activity to the left-hand side of the scene, yet when it reaches the outline of the hills, it merges with the colours of the sky.

This painting is well-finished, despite the use of loose and fresh although short brushstrokes – here denoting total mastery of technique and retention of the perceived. However, it also reveals skill acquired over the years which served to allay an effusiveness previously displayed through a more violent stroke and a preference for focusing on the most expressive atmospheric features.

Preparing for the Catch