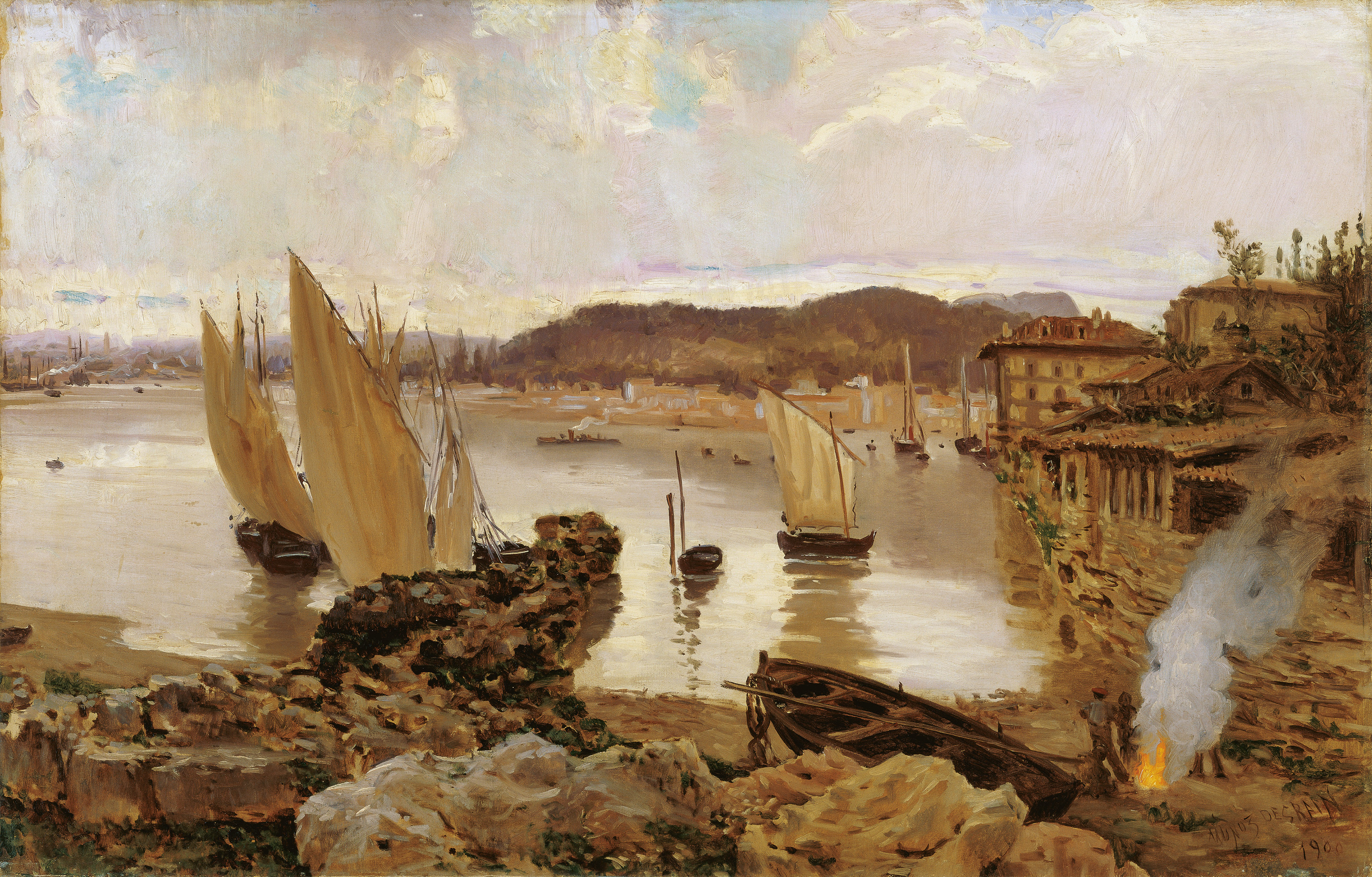 The Port of Bilbao

This painting is a view of Bilbao's tidal inlet from one of the shores. The foreground is dominated by the rugged rocky outcrops with a boat beached nearby and a group of sailors warming themselves at a fire. Various sailing boats lie at anchor in the water and far away in the background a number of small vessels and a steamer crossing the water can be seen. Port buildings extend along the shore and, representing the profile most typical of this industrial city, are lost in the distance amid the smoke and chimneys.

Although Muñoz Degrain painted other coastal views of the north of Spain, they are not common in this Valencian artist's work. In fact, throughout his life he showed a predilection for the sensuous, exuberant colour of the Mediterranean and the eastern world – to which he devoted the best and most personal of his very prolific landscape production – as well as scenes of wooded areas, snow-capped mountains and floods.

Its true appearance drastically transformed by the painter's irrepressible imagination, the scene in this canvas nevertheless represents a more restrained Muñoz Degrain with a range of sober colours whose cold, leaden tones splendidly reflect the light of the Basque sky as it bathes the whole landscape and turns it into the absolute centre of the composition. Indeed, the unpleasant sensation of the cold, damp atmosphere of the port of Bilbao with its overcast sky is underlined by the artist through the inclusion of the fire, while the whole landscape is depicted with a vigorous, fragmented technique fully consonant with the modernity of the European avant-garde movements of the time (and actually present in Muñoz Degrain's paintings since the 1870s).

Another version of this composition by Muñoz Degrain, exhibited in 1990 under the title Bahía Mediterránea ("Mediterranean Bay"), also exists. Smaller in size (65 x 100 cm), it was painted with a considerably more careful technique and displays a number of variations, in addition to the fact that it is undated.1 Bearing in mind the painter's impulsive artistic personality, extraordinary creative capacity and boundless imagination (which allowed him to vary his artistic idiom continually and preclude mimicry of any kind), it is perhaps risky to point to either of the two versions as a copy of the other, as in each the artist achieved different aesthetic results. Thus, while in this dated version Muñoz Degrain used a broad technique with long brushstrokes and thick impasto and formed the main elements in the picture only roughly, emphasising volumes and the effects of the light of the sky on the quiet waters of the inlet, in the undated canvas he paused to add greater definition to the different elements in the landscape using light, short dabs of the paintbrush to infuse the colour with greater vibrancy.

The Port of Bilbao