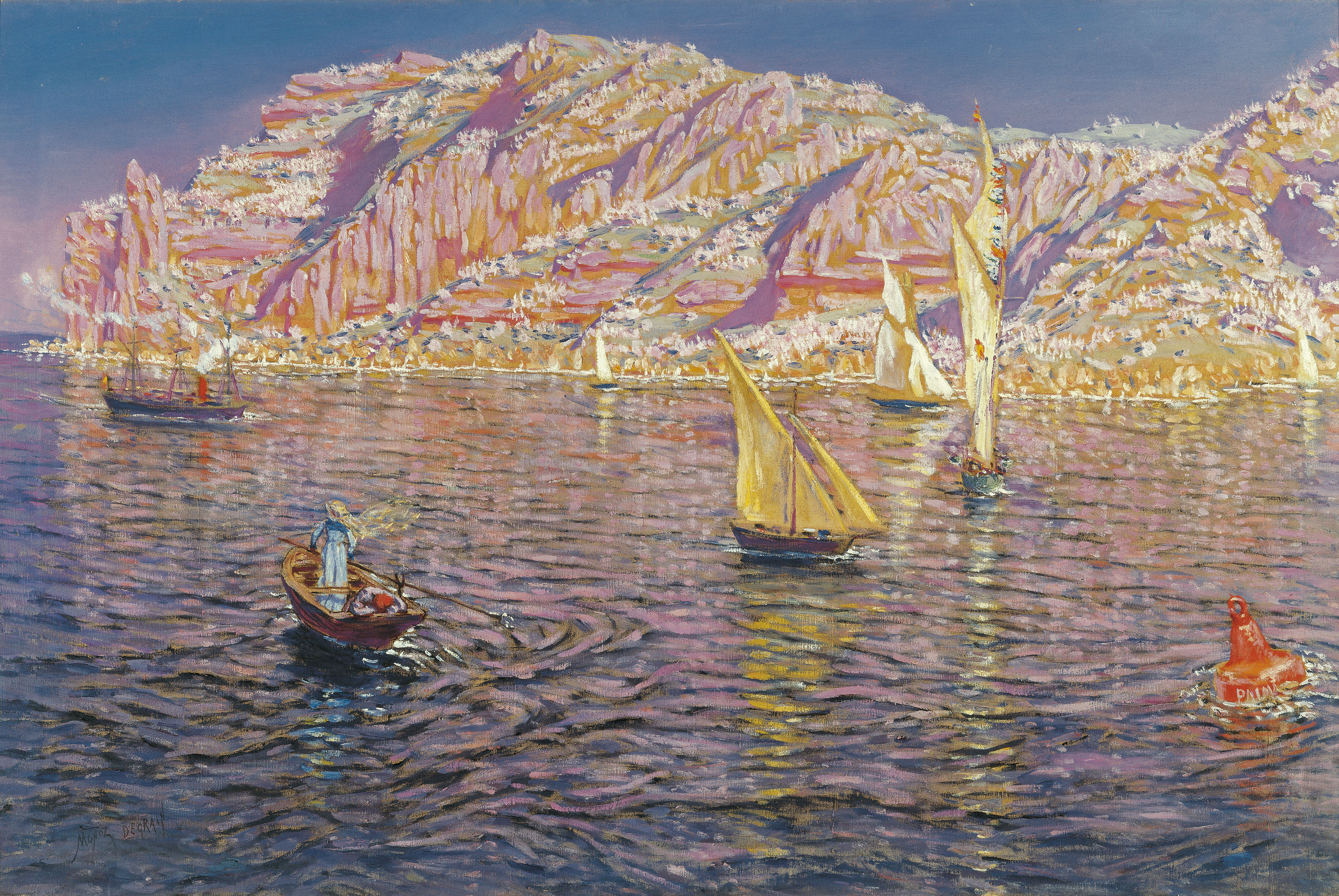 Seascape. View of the Bay of Palma de Mallorca

Although no other seascapes of Palma de Mallorca by Muñoz Degrain are known of, this picture belongs to the large number of his paintings whose theme is the Mediterranean. More specifically, it is associated with certain landscapes inspired by a journey to Palestine, Turkey and Greece between May and August 1905, during which time the painter kept an account of his travels. A stay in Mallorca is not mentioned but he may have included the Balearics in that "working cruise". Whatever the case, some link with Mallorca must have existed insofar as in 1922 he was considered for a vacant chair at the Palma de Mallorca Academy.2 Muñoz Degrain himself wrote that on that trip he found inspiration for several of his best works. Indeed, those painted between 1905 and 1910 with titles relating to Middle Eastern landscapes and themes display a unity of style and colour so distinctive that together they form one of the most attractive categories in his production.

This painting contains the colour range – purples, oranges, yellows and blues – with which Muñoz Degrain is conventionally identified. The brushstrokes are very broad, loose and uneven and thus best adapt to the different visual qualities of the water, rocks and sky, etc. The gestures in these strokes are so intense that any coincidence with the actual topography or colour ceases to be of importance. The spectator is carried away by the painter's excitement at the light and its effects on colour, and his capacity to use nature as a source for the production of sensations which he transforms with his brush into form and colour. Given that this painter's sensitivity is essentially dynamic, he often manages to suggest action within the landscape itself, not only through the inclusion of rudimentary figures or objects in motion5 but above all to make the image vibrate, to the point that what reaches the spectator is not a view of solid rocks or choppy water but the constant collision of light on those features and the brilliant sparkles caught by the eye as it is submerged into the red, late-afternoon light.

Of all the canvases of Muñoz Degrain's Middle East series, the one closest in composition to Seascape: View of the Bay of Palma de Mallorca is Lebanon from the Sea (Valencia Museum of Fine Arts). In both, the composition is horizontal and the angle situates the spectator on the sea as if he were in a boat while observing the motion of other vessels and the rocky coast that conceals the horizon in the background. But whereas in Lebanon from the Sea a boat with a fanciful design – perhaps intended as an interpretation of an ancient Phoenician vessel – appears in the foreground together with the real sailing boats close to the coast, in Seascape: View of the Bay of Palma de Mallorca all the craft are modern. From the left a steamer advances towards the centre and, compositionally speaking, is counterbalanced by the red buoy with a sign reading "Palma", while, between the two, other pleasure yachts sail in circles near the coast. In the foreground a humorous note not frequently found in Muñoz Degrain's paintings is added by the small rowing boat with an elegant female figure in a refined holidaying outfit rowing frantically while her companion, possibly seasick, lies slumped over the stern.

The artist's own opinion comes to mind: "I estimate sincerity in art as a virtue capable of maintaining the artist's spirit in equilibrium – assailed as it is in these times by strange and not always viable novelties; but I am far from considering all sincere manifestations as necessarily artistic. The goose is just as spontaneous when it cackles as the nightingale when it sings [...]"

Seascape. View of the Bay of Palma de Mallorca