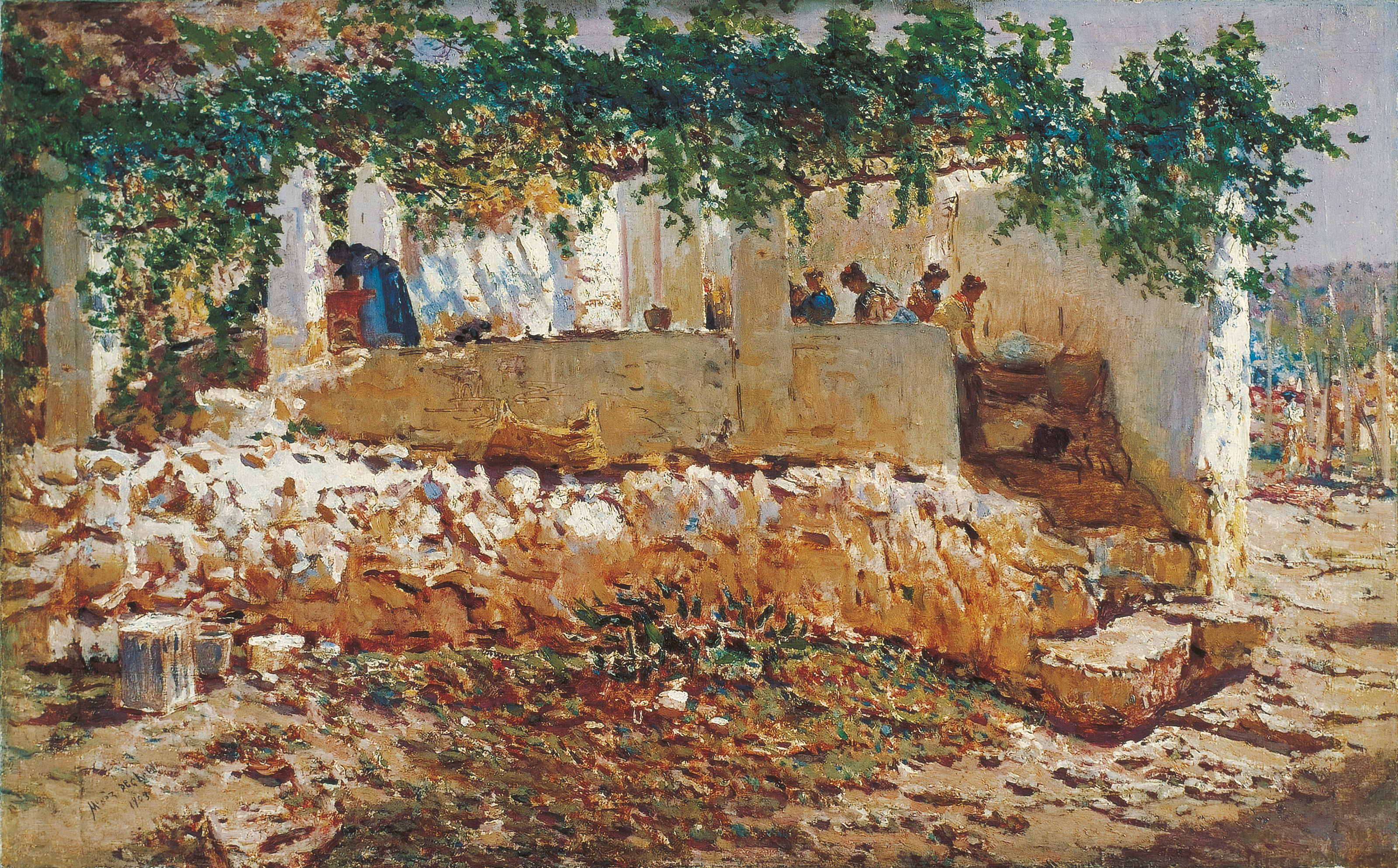 When some biographies of 19th-century artists reach Muñoz Degrain, they state, almost if it were his greatest virtue, that he was Picasso's teacher, yet that is not true. It is true, however, that his family – his father in particular – was a close friend of don Antonio's, and as proof of the link between the Ruiz Picassos and Muñoz Degrains there is a Christmas greeting recalling good times spent together in Valencia: a fine watercolour – The Old Man with the Blanket (1895, Museo de Málaga) – dedicated by "Pablito" to Muñoz and depicting his father wrapped in a blanket wearing a night cap.

But there is more: some landscapes painted by Picasso in 1895 during his summer stay in Malaga are similar to others by Muñoz Degrain with earlier dates but coincide with Degrain’s particular way of interpreting the environment, especially during his most strictly realist period. However, Muñoz Degrain is much more than that, and should be considered as an exceptional painter in his own right.

As this painting in the Museo Carmen Thyssen Málaga shows, Muñoz Degrain did not give up that way of working from life in which he recorded things through brief, very loose, impastoed brushstrokes, his main concern being to retain the light by fixing the shadows. On the surface of the canvas he applied small spots of colour reminiscent of pointillism (Post-Impressionist, in any case) in order to stabilise forms and in particular provide a direct and true record. Not even the narrative anecdote of the women’s activity diminishes the sincerity in his gaze. In this work don Antonio put his poetic concerns, symbolist fantasies and evocative games aside and worked instead to achieve the immediate and unadulterated nature of the act of recording.

If we compare this work with another of 1859 in which the principal figures again are washerwomen, the progress in the painter's commitment to reality is clear. Despite the fact that that picture from his first Valencia period is a very sincere example of the realism of his time, the painter did not think twice about submitting to academic compositional rules and centred the scene on the action of the women, around whom the other elements revolve. However, the Muñoz Degrain in the Museo Carmen Thyssen picture is much more self-assured and free of conventional ties. He is unconcerned with the effect of the work, except for its capacity to reflect a reality in which light is the reference point.

This is the work of a master, painted for the sheer pleasure of it. The dimensions, theme and personality of the work provide an insight into that artistic impulse to halt time and space as if it were a snapshot while shunning the artificial faithfulness which might be associated with the camera (with the photograph), from which he was so keen to keep a distance, as he categorically stated in his speech of acceptance into the San Fernando Academy of Fine Arts.

1903 found him deeply involved with his teaching activities at the School of Fine Arts, where he held the chair in landscape painting. He strove to improve that field and guide the concept of it in Spain towards a form of realism with light as the reference point. And from the platform of further education, following its norms, he worked with self-control to transfer nature and the action taking place within it before his eyes to the support. That is why Washerwomen of 1903 should be seen as an exercise in sincerity.

Nothing is superfluous; everything is measured, the spots of colour, the shadows. Even the action of the figures is intentionally subordinated so as not to distract the attention from the real theme of the work: that specific space of the rural world where the wall delimiting the washing area, the trained vine and the pebbles on the road are all of equal importance and mere pretexts for playing with colour, impasto and light, for amusing oneself with a brushstroke applied ingenuously but becoming the centre of all things through its capacity to record. Only a great painter committed to the modernity of Spain in his age was capable of accepting such challenges with such mastery.

And at the same time he was thinking of Don Quixote and Romantic literature, seeking a scene for Don Juan, and musing over Jesus at Lake Tiberias or St John in the River Jordan. He was esoteric in The Sacred Tree and was preparing to immortalise the battle known to Spaniards as the "Disaster of Annual" and sing the praises of its heroes. Muñoz Degrain is all that – and more.