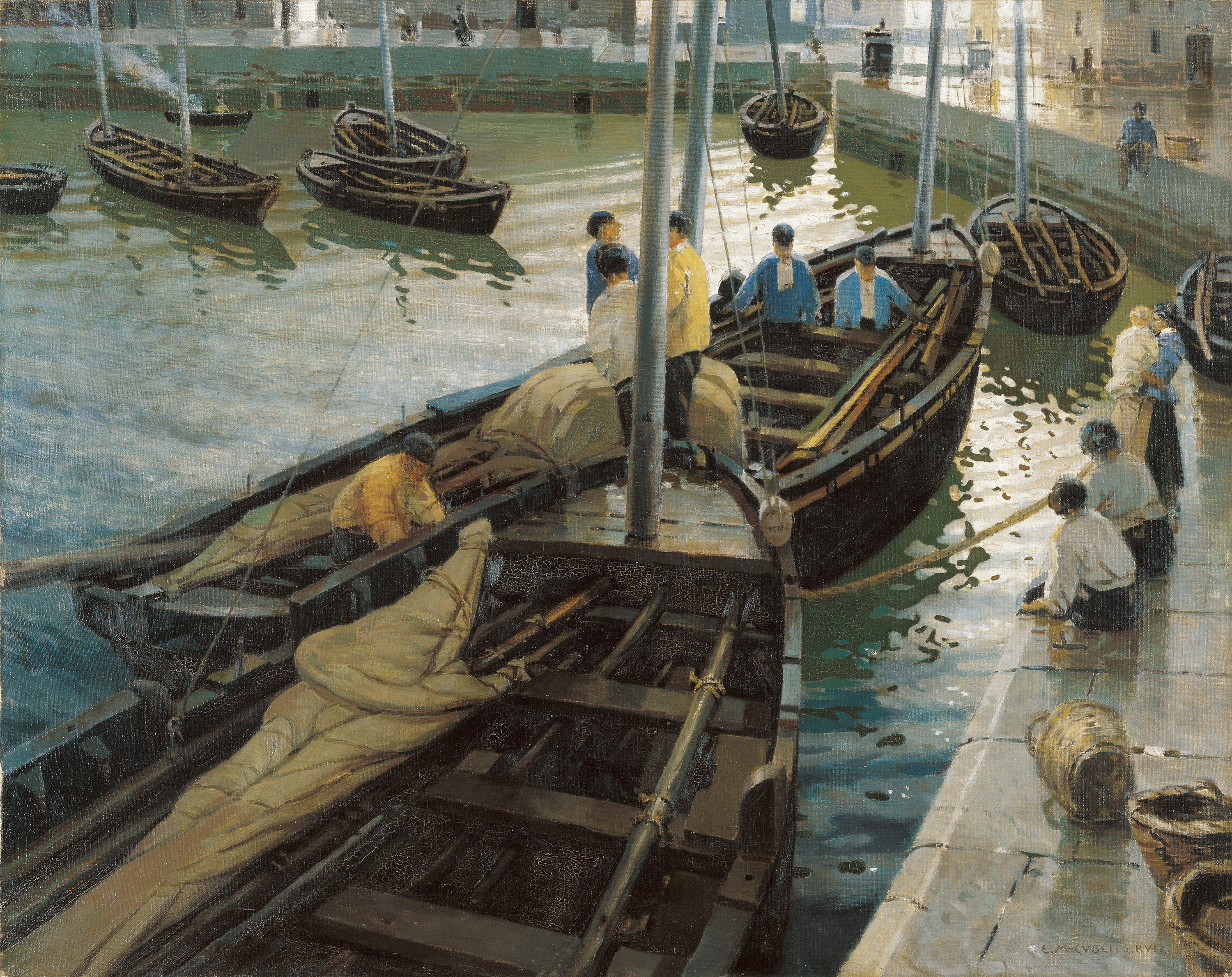 Return from the Catch

This is a scene of men returning from fishing in a corner of what could be any port, with one group, having lowered and furled sails, stowing the oars and picking up their gear. Meanwhile, three women wait near some wicker baskets, two sitting on the dock, the other standing with a child in her arms. In the background on the right, another figure sits, legs dangling, also near a basket.

This canvas is an excellent example of the theme of the return from fishing, which the Madrid artist painted on many occasions. In fact, it is very similar, except for a few small variations, to another painting signed in the same way and also dated 1911. That particular work won the artist a medal first-class (his second) at the 1912 National Exhibition of Fine Arts and has been on loan from the Museo del Prado at the Malaga Museum of Fine Arts since October 1931.

Although of exactly the same measurements, the two are basically differentiated by the presence in the Thyssen painting of the baskets and the women on the dock, plus the fact that there is no boat on the left of the canvas or a second fisherman – who in the Prado version appears in the stern of the middle boat. Furthermore, a third version from a private collection and displayed at a monographic exhibition also exists. Considerably smaller in size, it combines elements from the other two.

As stated, Martínez Cubells painted the theme of the port and the return from fishing on countless occasions. In the early 1910s, he sold a large number of canvases with that theme in the Americas and gained considerable success when participating in exhibitions at the Salon Philipon in Buenos Aires in 1912 and the 4th Spanish Art Exhibition in Rio de Janeiro a year later. In 1916 he won a Grand Prize with La vuelta de los Pescadores ("Return from the Catch") at the Panama International. Two years later, he included paintings with this theme among the forty-eight he presented at the Sala Jansen in Montevideo, and shortly after at the Salón Costa.

However, it was at the beginning of the century (between 1903 and 1905) when he discovered his true passion for ports while travelling in Holland and France (Brittany). This is well reflected in the splendid Pescadores bretones ("Breton Fishermen") now in the Rio de Janeiro Museum of Fine Arts. Other interesting canvases also exist thanks to his constant trips to the Bay of Biscay, including After the Catch, also called Pescadores del Cantábrico ("Fishermen of the Bay of Biscay") now in the San Fernando Academy of Fine Arts.

It is therefore difficult to identify the port depicted here. However, on comparing it with the canvas belonging to the Museo del Prado plus two others of almost identical measurements presented (nos. 30 and 32) at the 2003 monographic exhibition mentioned above, and bearing in mind that all are similarly set in ports, we might venture to suggest that it is Bermeo, where the painter occasionally spent periods of time. The paintings exhibited in 2003 are entitled Lobos de mar (Bermeo) ["Sea Dogs (Bermeo)" – private collection] and Trabajo rudo ("Rough Work" – Pedro Masaveu Collection, on loan to the Asturias Museum of Fine Arts).

A collection of photographs taken by Martínez Cubells is now held by his family. The artist almost certainly used one of these with an elevated viewpoint to paint this canvas. In some photographs it is possible to see the sheen typical of stagnant green water which some have interpreted as a thick, oily presence.

Martínez Cubells succeeded in conveying a certain kind of intimism in this canvas, and in the words of Felipe María Garín, the painter: "formulated a new theme halfway between the interior and the seascape; the sea appears as if confined in ports and inlets and even in small 'corners' of the two".

Return from the Catch