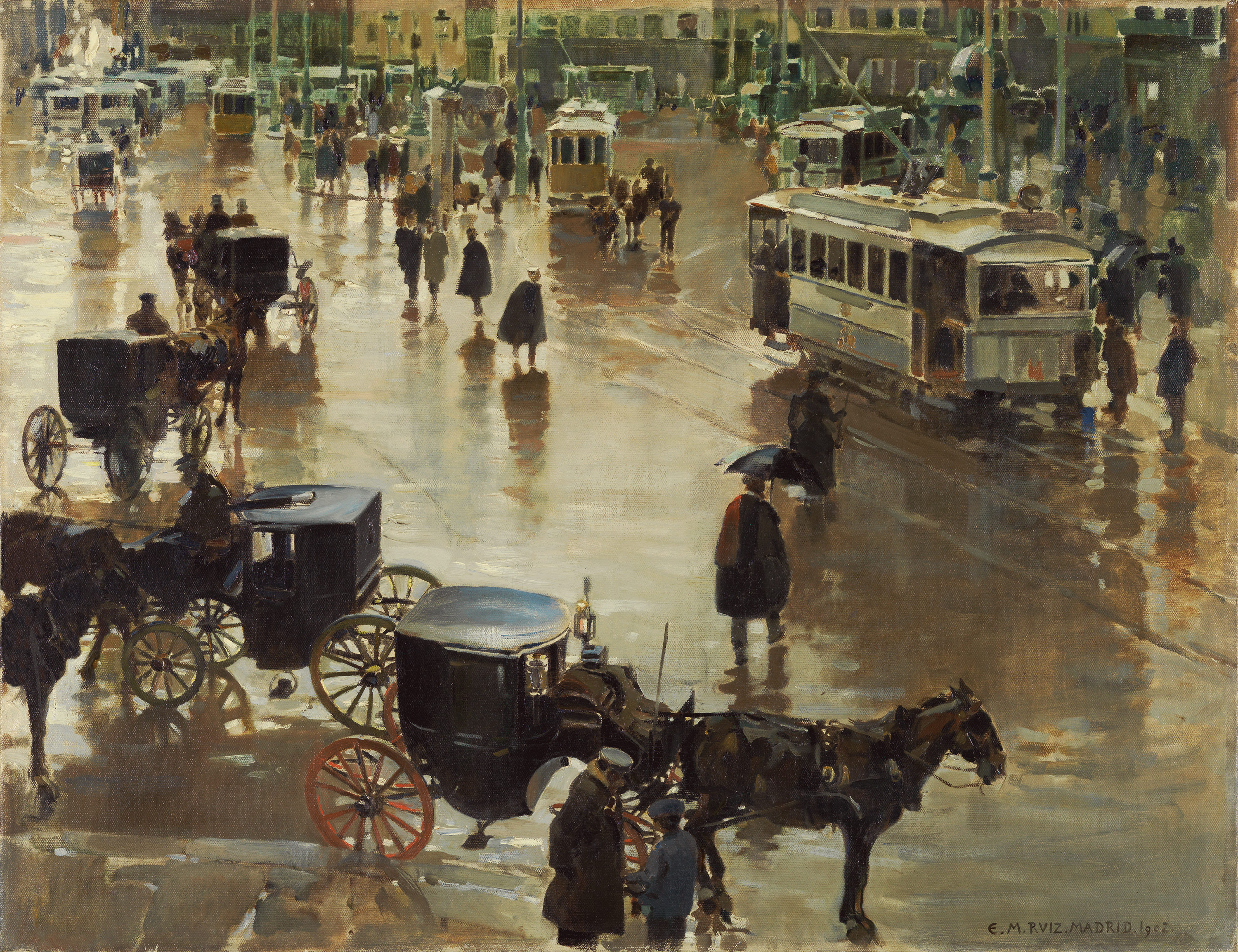 Documentary evidence proves that the artist Enrique Martínez Cubells submitted a canvas entitled Puerta del Sol, Madrid at the 1904 National Exhibition of Fine Arts together with fifteen other works, and that for one of these – Work, Rest, Family – he received a medal first-class. Puerta del Sol, Madrid was featured in the official exhibition catalogue1 as number 769 and measured the same (75 x 96.5 cm) as this canvas from the Museo Carmen Thyssen Málaga Collection acquired at auction in Madrid in 1998. As the date at lower right indicates, it was finished two years before it was sent to the exhibition.

The painting is one of a series of (little-known) urban views by the artist, painted on his return from one of his many European journeys of between 1901 and 1906. It reflects both the cosmopolitan spirit characteristic of the artist's personality and, above all, his "European years", as well as the success of his most personal style of painting. It is noteworthy how in just five years he followed a path from pessimistic social realism – evident in An Accident, a picture which received a mention third-class at the 1897 National Exhibition – to urban landscapes painted with nimble, dynamic strokes.

Two versions of this scene exist. One belongs to the Museo Municipal de Madrid, and was acquired from the painter's widow, Josefina Gargallo Moreno, in 1951,3 while the other, naturally, is this magnificent canvas. In both cases the painter immortalised Madrid's image after the electrification of the Sol-Serrano tramline on 3 October 1898. From that time on, the image of the square and its surroundings changed considerably with the area towards Carrera de San Jerónimo filling with cafés and becoming an essential rendezvous for writers, actors and artists.

Martínez Cubells's main source of inspiration in those years, however, were Bay of Biscay and Brittany port scenes, and through these he made himself a name as an artist. The men and women of those places provided him with that intimate character that allowed him to step away from the picturesqueness which was so important in Madrid painting and the radiance of the Levante beach scenes popular due, more than to any other artist, to Joaquín Sorolla, and held in such high esteem.

Scenes with back lighting and twilight – so directly opposed to the former luminarism – were also to become defining features of his work. Since 1895 Enrique Martínez Cubells had seen German realist-naturalist painting triumph at the Venice Biennale and was aware of the scant enthusiasm for melodramatic historical and regionalist scenes. In 1900, he moved to Munich and from there travelled around Northern and Central Europe to study the technique of the artists he regarded as essential to any aesthetic renovation of art.

This painting reveals the artist's endeavours, at 28 years of age, to counter the conventions set by the official circles and to base his style on other aspects of painting such as light and atmospheric changes. It is therefore not surprising that he should choose a view of that square in the centre of Madrid in the light of a wet, winter afternoon and one so clearly similar to his Plaza de Max-Joseph en Múnich

Artistically, the Madrid of the end of the 19th century was a very conservative city and that is why this painting went unnoticed by the jury at the National Exhibition, despite its boldness and modernity, despite being a delight to the eyes. Painted with thick, transparent brushstrokes, Puerta del Sol, Madrid brims over with elegance and agility. It is a tribute to a great city, to the late-afternoon light.

From his youth Enrique Martínez Cubells strove constantly to disassociate himself from his father Salvador Martínez Cubells as an artist and his signature, which finally led him to sign in three different ways. The most usual – as verified by shipments to the 1901 National Exhibition – was "E.M. RVIZ", normally seen on the front of his canvases from 1900 on, especially those painted between 1901 and 1902. This enables his signature to be matched with the date when this picture was painted. After 1903 and just before the 1904 National Exhibition, he stopped signing in the way that is recognisable in the canvas under discussion and devised a new signature – "E.m – Cubells Ruiz". This can be seen on the canvas belonging to the Museo Municipal de Madrid Collection, although for a very short period of time he alternated it with "E.m. Cubells".

For these reasons, in addition to the obvious self-assurance and technical maturity demonstrated by the artist in this painting, everything points to the fact that this work is the one entered by Enrique Martínez Cubells at the 1904 National Exhibition.