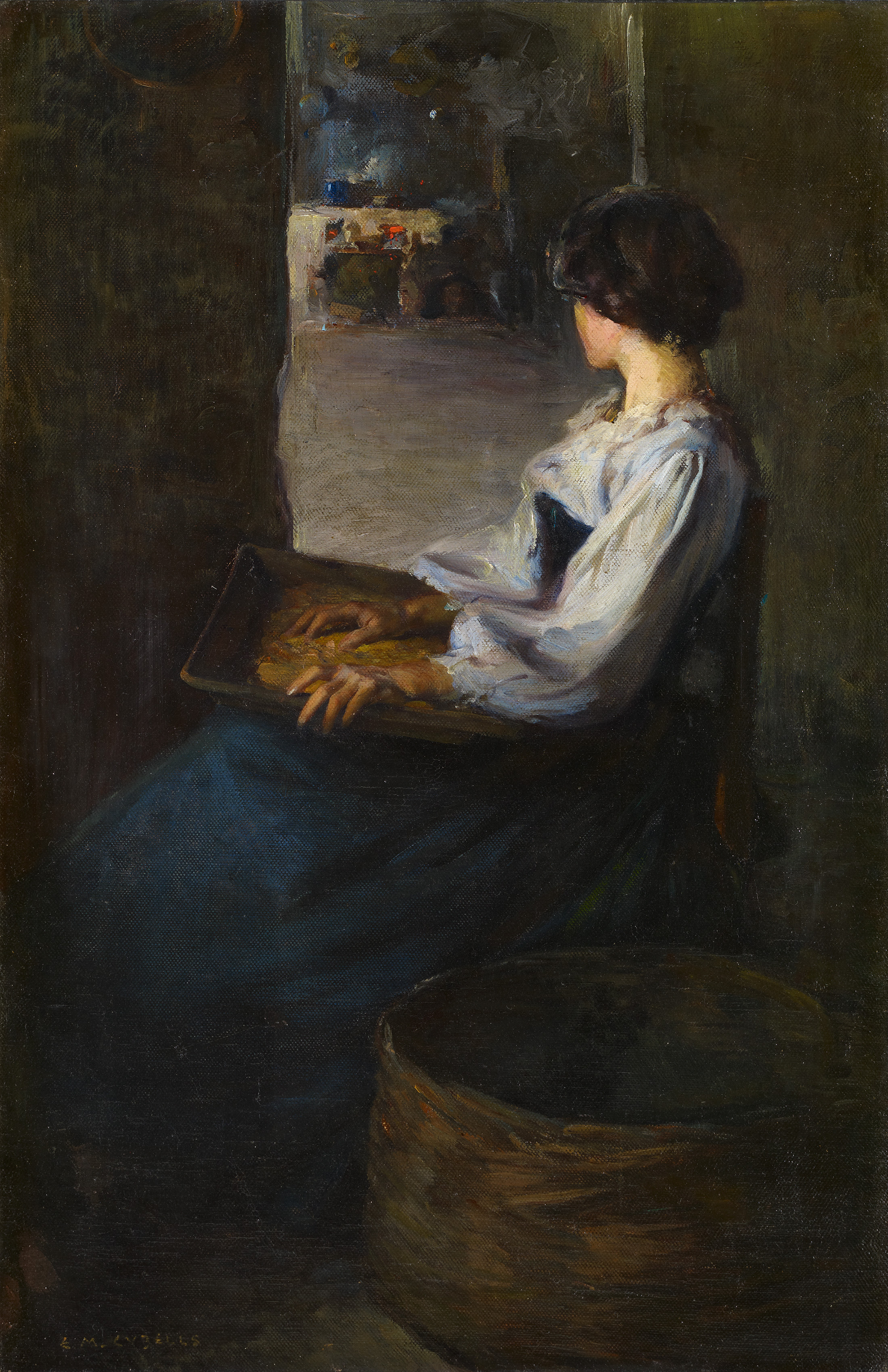 Breton Woman is the result of a cultural vogue which led groups of painters in the second half of the 19th century to settle in "art colonies" at various points on the Atlantic and in Northern Europe. Brittany was one such point. First Pont-Aven then Concarneau became centres which drew painters interested in the literary and pictorial aspects of the lower classes in rural and coastal regions. The themes of working on the land and out at sea, and the folk who lived in those places were of special interest to artists arriving from areas which were being progressively engulfed by the onslaught of the Industrial Revolution.

This part of Finisterre in France remained popular until the 1890s. Gauguin's departure for Tahiti in 1895 and the scattering of his followers, however, marked the decline of the colonies, and the beginning of the 20th century saw a strong reaction on the European art scene against themes connected with the culture of Brittany. Nevertheless, some painters continued to spend periods of time there in the 20th century, as for example the English Expressionist Matthew Smith, who lived in Pont-Aven between 1908 and 1909, and Maurice de Vlaminck, who was a regular visitor in the 1950s.

From the beginning, Enrique Martínez Cubells, the son of the history painter Salvador Martínez Yago, showed a preference for the social and genre themes advocated by the Brittany colony painters. The titles of his best-known works – El viático en la aldea ("The Viaticum in the Hamlet"), Invierno en Múnich ("Winter in Munich"), Work, Rest, Family and Return from the Catch – illustrate these preferences.

Breton Woman was painted possibly between 1899 and 1900, at a time when Martínez Cubells, who was then based in Munich, had travelled to several European countries, including France, to see some of the Brittany art colonies for himself. The unusual way in which the female figure's hair is gathered lends support to the suggested date of execution.

The theme is a delightful rural domestic interior. A young woman sits with a tray on her lap and her head turned towards a kitchen. She is enveloped in shadow and only parts of her neck, torso and hands are caught by the light. In the foreground, a huge basket emphasises the rural aspect of the theme. The fact that the woman is not depicted in typical Breton headgear could be connected with the reaction against local genre themes, which by then was widespread. Breton Woman is, in fact, a study of interior light, developed with broad strokes, which reveals what Martínez Cubells had learned from contemporary European naturalistic trends in art.

In this painting he used a small colour range, based on cold tones. The strokes are broad and were swiftly applied. As a focus the artist took the cobalt blue skirt of the woman at the centre of the composition, whose background is a kitchen and a pot on the cooker. The accent placed on the treatment of the light dispels any interest in specific thematic questions. Each of the themes – the figure, the dark space surrounding it, the kitchen with its utensils – serves as a support in receiving the environmental light and as a contrast with respect to the areas in shadow. In this way a balance between the corporeality and volume of the objects and the impact of the light is achieved.

The technique used by Martínez Cubells has some points in common with that of Roderic O'Conor, a painter who settled in Pont-Aven during the years when the former visited the colony. However, Martínez Cubells seems to have been influenced more directly by painters from other contemporary colonies, particularly Anders Zorn, who had lived in colonies in Saint Ives, Cornwall, and Skagen, Denmark. Martínez Cubells's broad, long, rapid brushstrokes are similar to Zorn's, who in turn had adopted that technique from Velázquez (and which his friend Sorolla would later imitate). Martínez Cubells would also take up Zorn's repetition of the theme of the female figure in an interior with contrasting light and shadow.