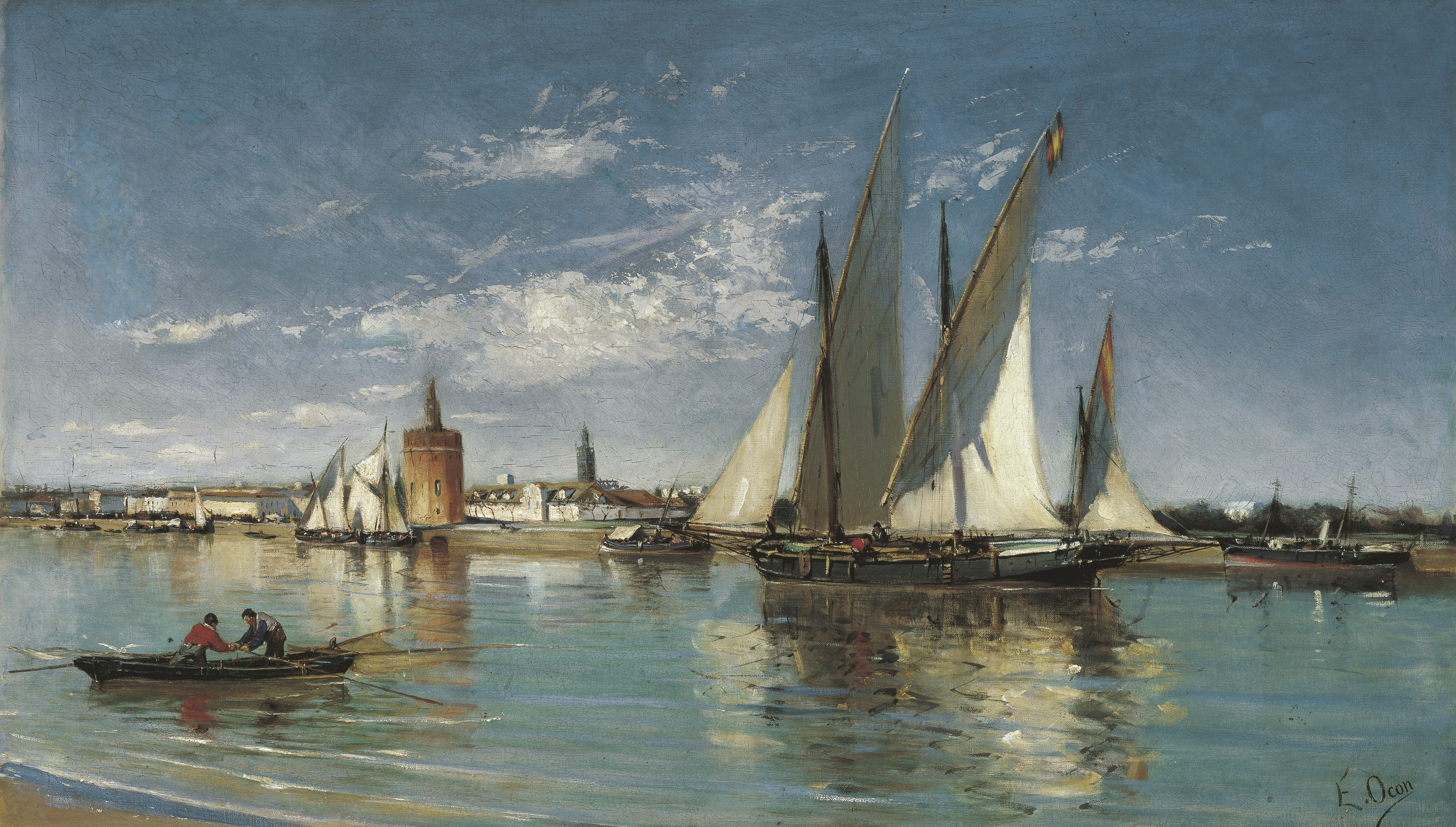 Emilio Ocón's career as an artist began in 1863, when, having finished his nautical studies, he was invited to Madrid by Carlos de Haes, who instructed him in marine painting and recommended he undergo further training in the Netherlands by joining in the activities of the Hague School and its Dutch masters. After returning to Malaga, in 1873 he embarked on a tour of Central Europe, returning once again to the Andalusian city four years later. The titles of his paintings from that time, however, suggest that he travelled around Andalusia and took a special interest in the coasts of the Strait of Gibraltar.

The theme of this painting, entitled Large Sailing Boat Leaving the Port of Seville with the Gold Tower in the Background, suggests that one destination in his travels around Andalusia was Seville. There he painted his only known seascape of this city, with its landmarks in the background.

This "river painting" is constructed on the compositional and formal principles Ocón learnt in Holland, and the composition and colour can be likened to other pictures of his from the Dutch period. Some of these now belong to the Malaga Museum of Fine Arts and others to private Malaga collections.

The vigour of the brushstrokes capturing the sparkle of the light on the water with such ease and efficiency makes that part of the picture an excellent example of the kind of painting which gives priority to the resources of technique over theme. Although this might seem to assign the work to the category of realist landscape painting, many details remind us of the Romantic landscape: the prominence of the ships and the sails which, from their position at the centre of the composition, create a hierarchy within the painting; and those monumental landmarks of such importance, the Gold Tower and the Giralda beyond – so often featured in the views of Romantic artists like Domínguez Bécquer or even Pérez Villaamil – both elements filling the image with symbolism.

All of this creates an interplay between the old and the new (a method often used by Ocón) which distances the painting from pure realism and places it within that moderatism which some like to call bourgeois realism yet is no more than another name for the eclecticism of the last thirty years or so of the century. Irrespective of this assessment, however, the picture gains in personality thanks to the touch and colour, both excellent facets used here to serve a theme reflecting an immediacy and a reality not without evocation but in which pictorial values take priority over literary ones.

Ocón obviously felt very comfortable with the sky and the river water for he painted them efficiently and mixed tones with firm resolution. He also managed to fill the two most important areas with blues both wisely blended and graduated while using very loose strokes, suggesting that the scene was painted from life. The city and the ships are anecdotes which mark a narrative possibly made frivolous by the presence of the boatmen in the foreground, who serve to identify the setting. Not in vain, for Seville has so many literary connotations that it is hard to stand back from its image and invariably we are caught up by suggestions of festivity and luminosity. This is, on the other hand, a discourse that does not preclude the painter from the knowledge of how to define the essence of a place by presenting one reality of it, and thus acting within the coordinates of the most immediate art of his time.