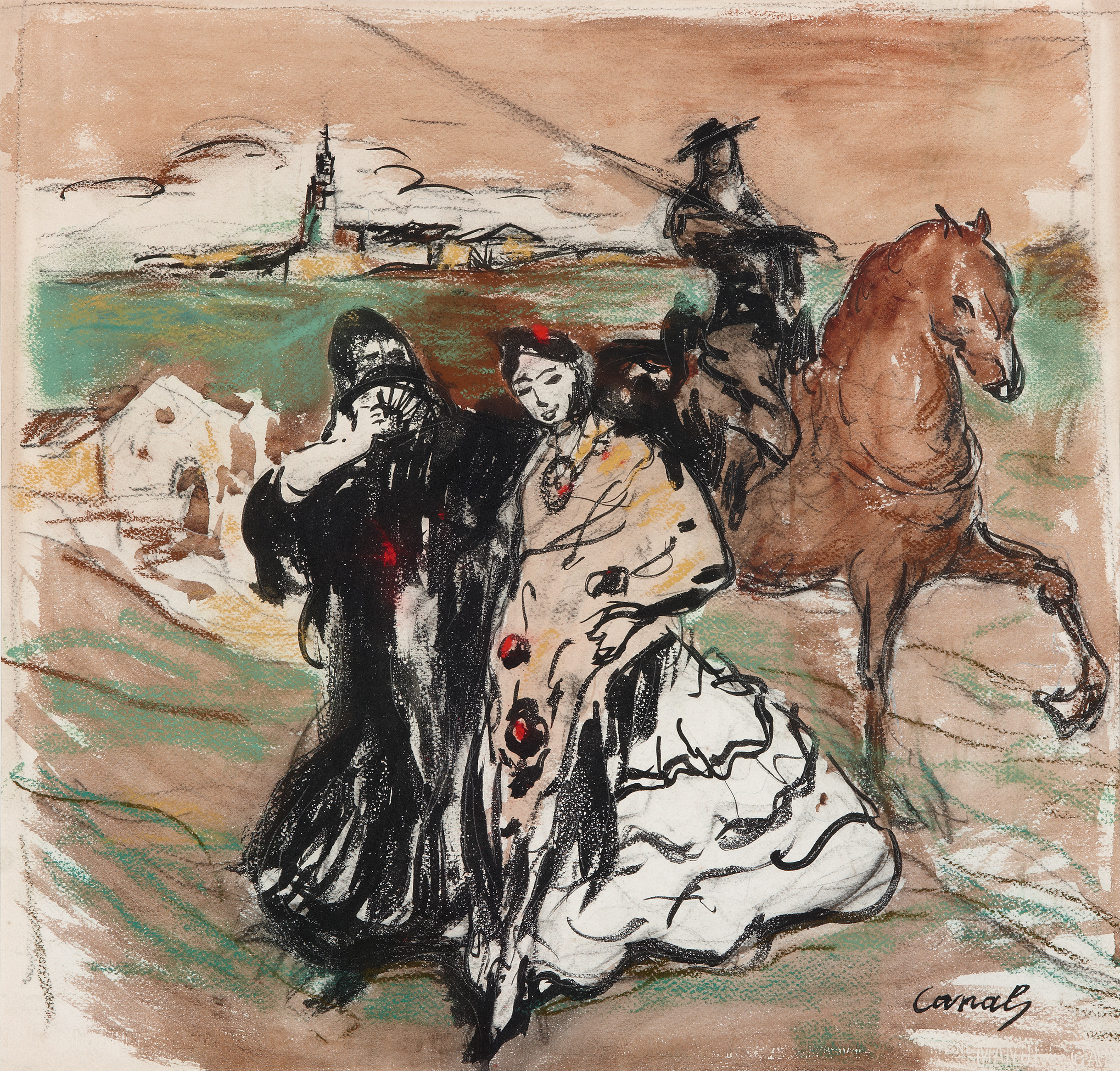 Gypsies, like Ricard Canals's other pastel in the Museo Carmen Thyssen Málaga Collection (CTB.2003.3), almost certainly dates from the first decade of the 20th century and a time when the Catalan artist was selling his work to Paul Durand-Ruel, who was the dealer of the leading French Impressionist painters. Indeed, Durand-Ruel organised a very successful solo exhibition for Canals at his New York gallery in 1902, at the same time as he was selling the latter's paintings at his famous Paris establishment. This arrangement continued for as long as the contract between the two remained in force.

The huge demand for Canals's Spanish iconography between 1900 and 1910 took the artist to Madrid to study the Museo del Prado Collection and also to Seville and Granada, where he sought and found inspiration for themes with the working-class girls known as majas and manolas, , gypsy girls and bullfighters. Most of these "typical" and rather hackneyed themes were painted either in Paris or during his various trips around the Peninsula. It was during his stay in Seville that he is thought to have painted his famous canvas Las cigarreras ("The Cigarette Girls"), which now hangs in the Tobacco Factory. From its composition and theme and, above all, its square, vignette-style format, Gypsies could well have been intended as an illustration for a magazine or some other publication of the age.

Particularly noteworthy in Gypsies is the very loose technique, in which ink, pencil, charcoal, watercolour and pastel are freely combined, mingling with such naturalness that it seems that only pastel – with which Canals was so highly skilled – was used. The combination of techniques may be connected with engraving, with which the painter was very familiar. In fact, Canals passed on his knowledge to Pablo Picasso when the two artists lived in the French capital at the turn of the century. The black ink lines which form part of the figures, the village, and the clouds in the background are reminiscent of incisions with an engraver's burin, and the spots of watercolour and pastel recall the effect of acid, sugar or carborundum on steel plate. Indeed, on careful examination, a number of blue incisions can be seen.

The almost Expressionist facial features are a direct reference to the pastels and wash drawings of Picasso and his inseparable friend Carles Casagemas dating from around 1900. On the other hand, the sinuous streamer-like lines of the landscape and the clothes worn by the two majas are very similar to those in Isidore Nonell's contemporary drawings and canvases, although the themes are different. Nonell's gypsy girls were never intended to be "typically Spanish", just as Canals's quite obviously were, in spite of the fact that he endowed his figures with grace, elegance and aplomb and so managed to transcend the anecdotal. In this respect, Canals's work bears a considerable resemblance to that of the sculptor and illustrator Ismael Smith, who was also Catalan and produced, particularly as a result of his 1911–14 Paris period, Spanish scenes which won him great acclaim, especially in London and New York. The personages in the work of both artists belong fully to that iconography of "the Spanish", often totally Goyaesque, evoked in France throughout the 19th and early 20th centuries, and display an affinity with the (also French-influenced) musical worlds of Isaac Albéniz and Enric Granados. Like Smith, Canals was strongly influenced by Goya, from whose painting he captured the French connection via Édouard Manet (among others) and the Spanish one, which, in fact, was his own. Practically self-taught, he attended only one year at the Provincial School of Fine Arts (better known as the Escola de Llotja) in Barcelona, where he coincided with Nonell: both stayed for only one year. Canals's real school was the painting of the Impressionists, which he saw first-hand when he visited Paris in 1897, and the Louvre and Prado museums. Unlike Ignacio Zuloaga, the other great "Goyaesque" contemporary of his who also settled in the City of Light, Canals always displayed that Mediterranean sensuality which distinguished him, as is evident in the fluency of his brushstrokes (sometimes quite similar to Auguste Renoir's) and a palette of colours which, although at times solemn and sober, was graceful and unrestrained.