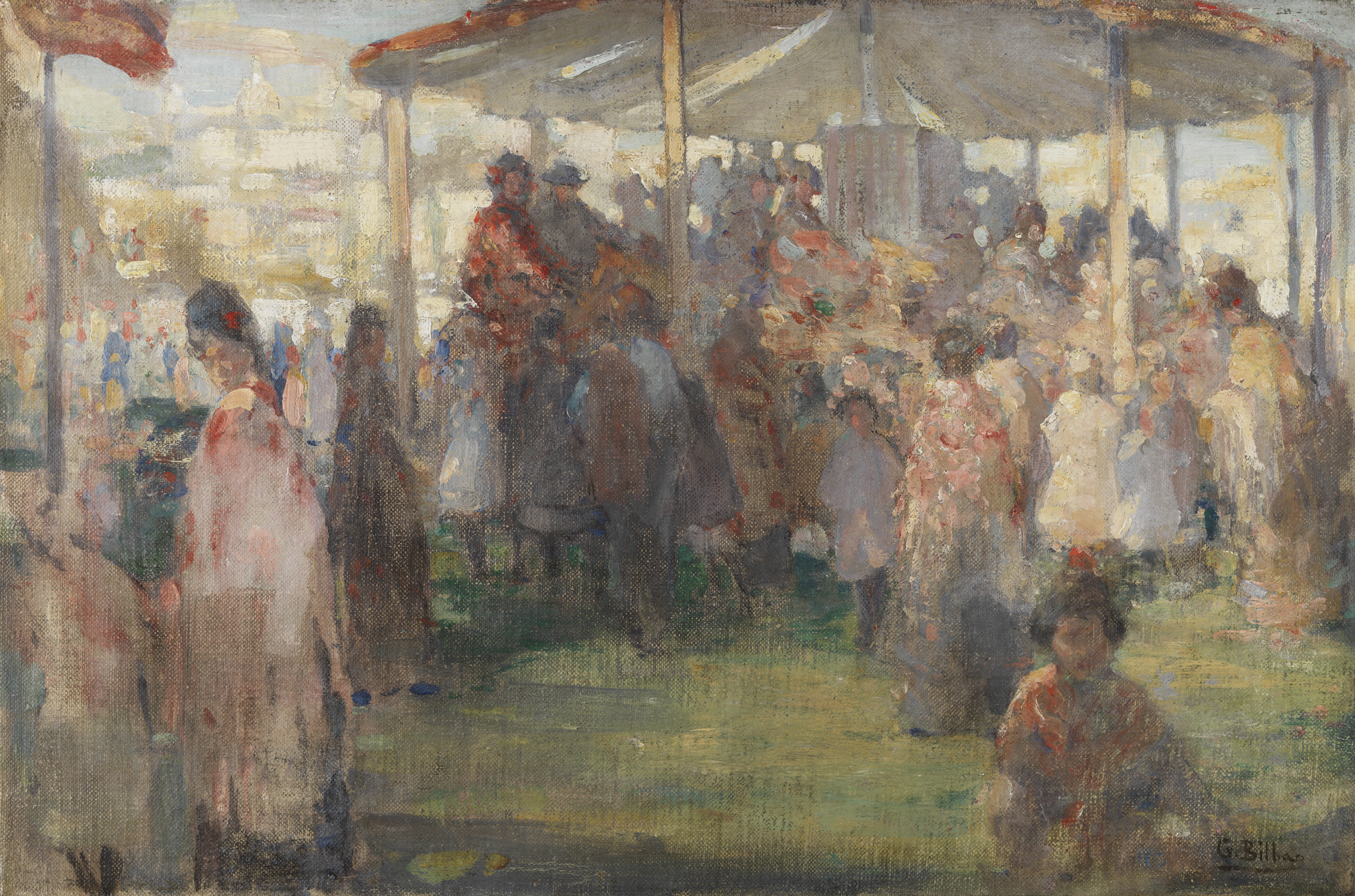 Noteworthy in the production of the Sevillian painter Gonzalo Bilbao are his genre scenes. On numerous occasions he devoted works of this type to Andalusian festivals – particularly those held in the city of Seville – generally in the form of outdoor scenes with Sevillian folk gathered at some popular event.

The scene portrayed by the artist in At the Fair is quite possibly the Spring or April Fair, which had been held in Seville since 1847. The painting focuses on the festival's more leisurely character, with the crowd around the stallholders' tents. At the centre of the composition people gather on horseback and foot beneath a circular templete, a kind of overhead structure which, with the awnings, provided shelter and shade. The figures in the painting are depicted in the dress associated with that festival, particularly striking, especially in the foreground, being the women's flamenco costumes – consisting of long frilly dresses and colourful fringed shawls – and the flowers and combs in their hair. Visible in the distance on the left behind the crowd is the Seville skyline; the Fair was held outside the city walls near the banks of the River Guadalquivir in the area known as the Prado de San Sebastián.

Bilbao painted scenes of this fair on several occasions, as for example in Camino de la Feria ("On the Way to the Fair", private collection, Seville), which shows women in typical costumes heading in the direction of the fair before it has started. The artist also produced a number of posters for Seville's springtime events, particularly the April and Holy Week Fairs. These were commissioned by the City Council to advertise the festivals to the local folk. The first such poster, which announced both the April and Holy Week Fairs, dates from 1900, while the second was commissioned in 1913. Other painters of the time, such as Gustavo Bacarisas, also produced oil paintings and lithographs based on these themes for the festivals.

The most extraordinary thing about At The Fair however, is Gonzalo Bilbao's painting technique. In this case, the aesthetics of the work turned away from 19th-century art to enter the realm of the new style of realism and luminarist impressionism. The colour takes the form of sketchy, predominantly pink and white spots with the figures only roughly outlined so that the main group under the templete forms a large area of bright colours bathed in light. The faces in the crowd are barely distinguishable and the figures merge into one another, giving the sensation of a large heaving mass. Even those in the foreground lack clearly defined facial features and only their clothing differs slightly. The city in the distance is a large white light-filled patch within which the outlines of the buildings, rendered with different shades of white, can be glimpsed. Stylistically Gonzalo Bilbao's treatment of the Seville Fair genre scenes (pictures of this kind were very common in the 19th century) was different in that his was a sketchy pictorial aesthetic of great chromatic power very close to the stylistic trends of Post-Impressionism. It was an aesthetic subsequently used in works on a similar theme by the painter Gustavo Bacarisas, mentioned above.