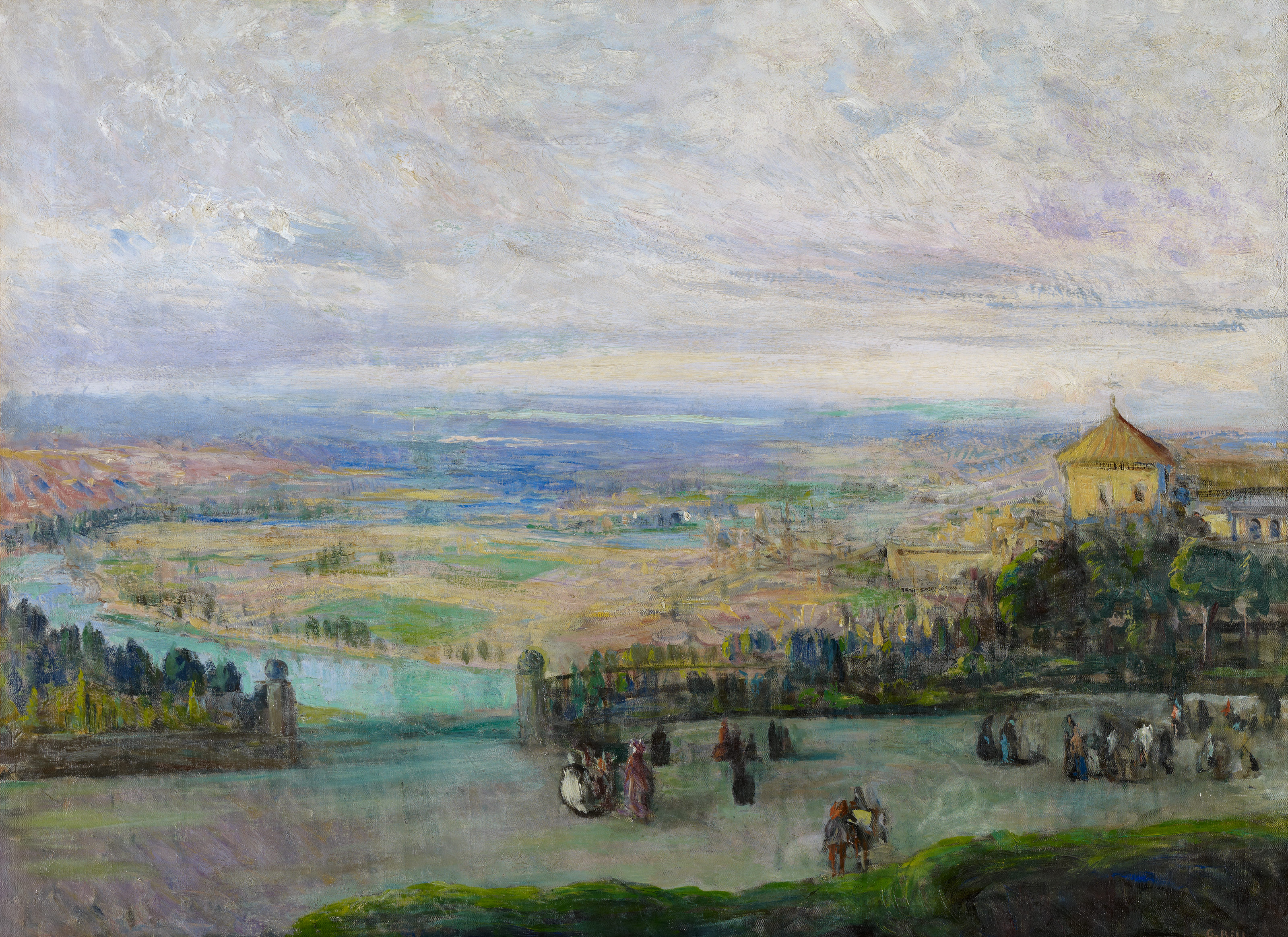 During a career of over fifty years, this popular, prolific Seville painter’s most representative subject was landscape, with or without figures. Genre painting and portraiture came very close behind, however. In fact, on numerous occasions Gonzalo Bilbao combined the three, which resulted in a distinctive type of landscape containing figures or portraits in which he was able to create an interesting iconography bringing together thematic tradition and technical modernity. Given the artist's biographical circumstances and his desire to capture the widest variety of landscapes, he painted scenes with land, seas and rivers, with cities and people or hinterland villages, ranging from Morocco to the European continent. His pictures of Spain include both the north and south of the peninsula. Structurally, they are either landscapes with grandiose aspirations, or else simple in their modesty, following the Generation of ’98's theories on a return to the culture of the people in order to portray its idiosyncrasies.

This fine example was painted from the natural height of Seville's Aljarafe region close to one of its wooded country estates. In the foreground are people and animals, both in groups and individually, near an enclosure circled by a palisade opening at the front onto a river. On the left of this splendid view, the ancient River Betis glides gently by in the sinuous form of a meander, while to the right stands the rustic but elegant structure of a farmhouse. The roof is superb – rising with grace and majesty like a tile-covered tower, with a weather vane in the form of a cross atop its finial – as is the chapel with its bell gable and verdant surroundings (like a small oasis) of different kinds of trees, including palms and cypresses.

In composing this picture Gonzalo Bilbao took into account the iconographic precedents of the Sevillian Romantic school in the genre of landscape, which explains the references to pictures by the painters Manuel Barrón and Manuel Cabral Bejarano. However, there are two differences with respect to these. The first lies in his way of dealing with that very iconography, i.e. like his Romantic predecessors, always dispensing with the view of Seville landmarks in the background. The second, and de rigueur, lies in the technique itself, for while the two artists mentioned above preferred to use the technique typical of conventional realism, Bilbao applied another, more modern one closer to Impressionism, based on a looser palette and capturing a very assorted, dramatic colour range, particularly in the deep planes and the sky. Here the latter is typical of Seville's Guadalquivir Valley in the springtime or of the scorching dog-days when the light is nuanced by a complex and sometimes unusual range of colour. This way of interpreting backgrounds in landscapes implicitly bears Velázquez's hallmark. Gonzalo Bilbao greatly admired his Baroque fellow countryman and on various occasions copied features from his paintings, greatly appreciating his treatment of the contrived effects of light particularly in open, panoramic landscapes. The same applies to scenes of interiors when he resorted to aerial perspective, above all in his series of preliminary studies of the interior of the Seville Tobacco Factory and its final version of 1915.