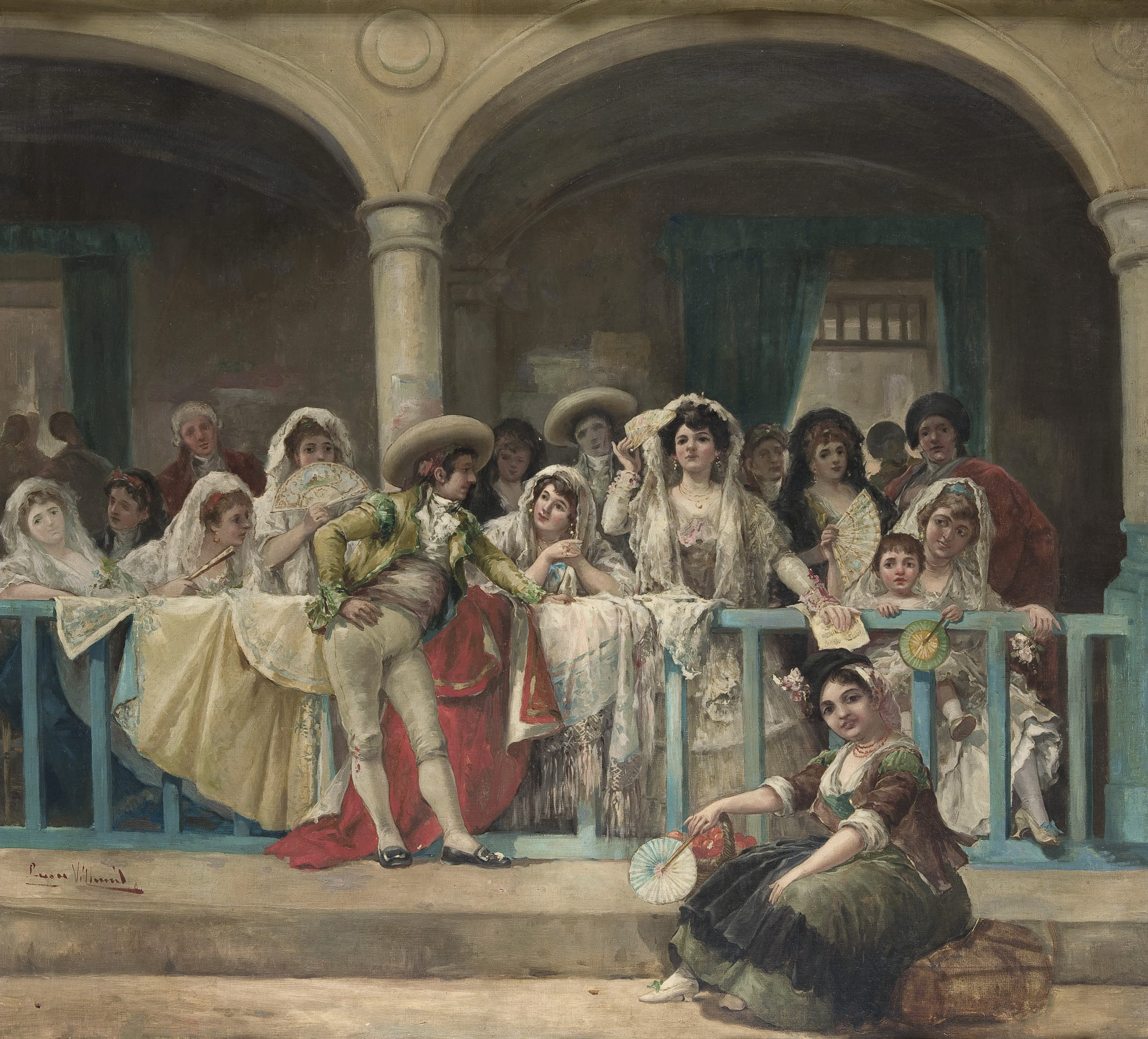 Most of the little-known and little-valued painter Eugenio Lucas Villaamil's career spanned the last thirty years of the 19th century, a time which saw the convergence of a number of aesthetic trends on the Spanish pictorial scene. He was a worthy representative of a group of Madrid painters who brought continuity to the traditional Castilian genre compositions reflecting Romantic influence and a clearly Goyaesque inheritance and which were always well received throughout the century. Indeed, this was particularly the case with Lucas Villaamil, who was deeply influenced by his father, the Romantic painter Eugenio Lucas Velázquez.

It is thanks to the many stories of a patron of Villaamil's, José Lázaro Galdiano, that we know of his life and character as well as his admiration for his father's work. In one such story Lázaro Galdiano told of how Lucas "the Younger's" house was full of pictures painted by his father. The son's admiration for his master, with whom he shared only twelve years of life, can be seen in characteristics such as an emulation of his style and occasionally in the impasto or palette, but above all in his recreation of many of his father's themes and much of his iconography. Both were united by a deep admiration for the work of Goya.

In the Box is a fine example of the syncretism of three factors: Goyaesque inheritance, paternal influence and an updating of themes and style consonant with the new trends which Villaamil adapted to – in addition to his personality as a painter.

There is no doubt that the world of Goya underlies this painting. The compositional technique of placing a relatively large group of figures behind a balustrade had already been used by the master of Fuendetodos in his frescoes at the hermitage of San Antonio de la Florida, where the scene on the base of the dome shows the people of Madrid looking on enthusiastically as the saint performs his miracle. Behind the rail in this picture, majas, manolas, chisperos and gentlemen in cloaks are presented in a colourful catalogue of poses. This iconographic theme had already been established with Majas on a Balcony, which is clearly latent in this painting, here devoid of moral or moralistic allegory. The idea of majas on a balcony was also developed on countless occasions by Eugenio Lucas Velázquez and is in fact a recurrent motif which he borrowed from Goya and reproduced in a wide variety of versions throughout his career. In the Box brings together different techniques tested by Lucas Sr in works such as: Charla en el palco ("Chatting in a Box") and Comentando en el palco ("Discussion in a Box"), both in the Museo Cerralbo, Madrid; Mujeres al balcón ("Women on a Balcony") in the Musée de Perpignan; and El palco de las presidentas ("The Box of the Lady Presidents") in the Museo Nacional, Havana. All of these paintings feature a balustrade as an auxiliary element in the positioning of the successive compositional planes and, depending on the version, are presented in a different way, with a figure in the foreground either standing or sitting. This painting contains both types of figure, for on one side stands a bullfighter flirting with a maja, and in the lower right corner an orange seller sits looking out saucily at the spectator, drawing him into the scene. The rail bedecked with fabrics (often capes) is another constant in all of the painter's versions and behind this element, which also marks the horizontality of the painting, is a large frieze of figures on different planes displaying all manner of gestures, attitudes, physiognomies and costumes. There is a nuance more picturesque than realist to these "popular" types of the period when the younger Lucas painted them. Perhaps the most unusual figure of all those in the painting is the female personage who marks the axis of the composition. She raises her fan to keep the sun off and in so doing strikes a pose and attitude that exude solemnity and somehow add a discordant note to the festive air surrounding the others

In addition to the strong Goyaesque and paternal influence, the canvas also reflects the painter's own personality, although depicting no more than a lively scene of an afternoon at the bullfight marked by a certain flirtatious air with traditional Castilian genre scene details adding rhythm to the composition. Unlike other works by Lucas Sr with a similar theme, the colours are pale, in places bright, and form a pleasant scene devoid of critical or moral connotations or indeed of any intention other than that of producing the picturesque image with that carefree, inconsequential air which contemporary middle-class patrons found so attractive. Although Lucas Villaamil has often been accused of following too closely in his father's footsteps, this canvas displays a technique very different from Lucas Velázquez's brisk, roughs tyle and use of thick impasto. Here with mastery he produced a painting with a pleasant tone, exquisite care in the drawing, well-finished, with special attention to the colours and deft compositional distribution. Above and beyond these pictorial elements, what ultimately signals Lucas Villaamil's style and personality is his clearly scenographic view of a world in which he saw himself as a spectator whose duty was to draw our attention enthusiastically to that world and involve us in it.