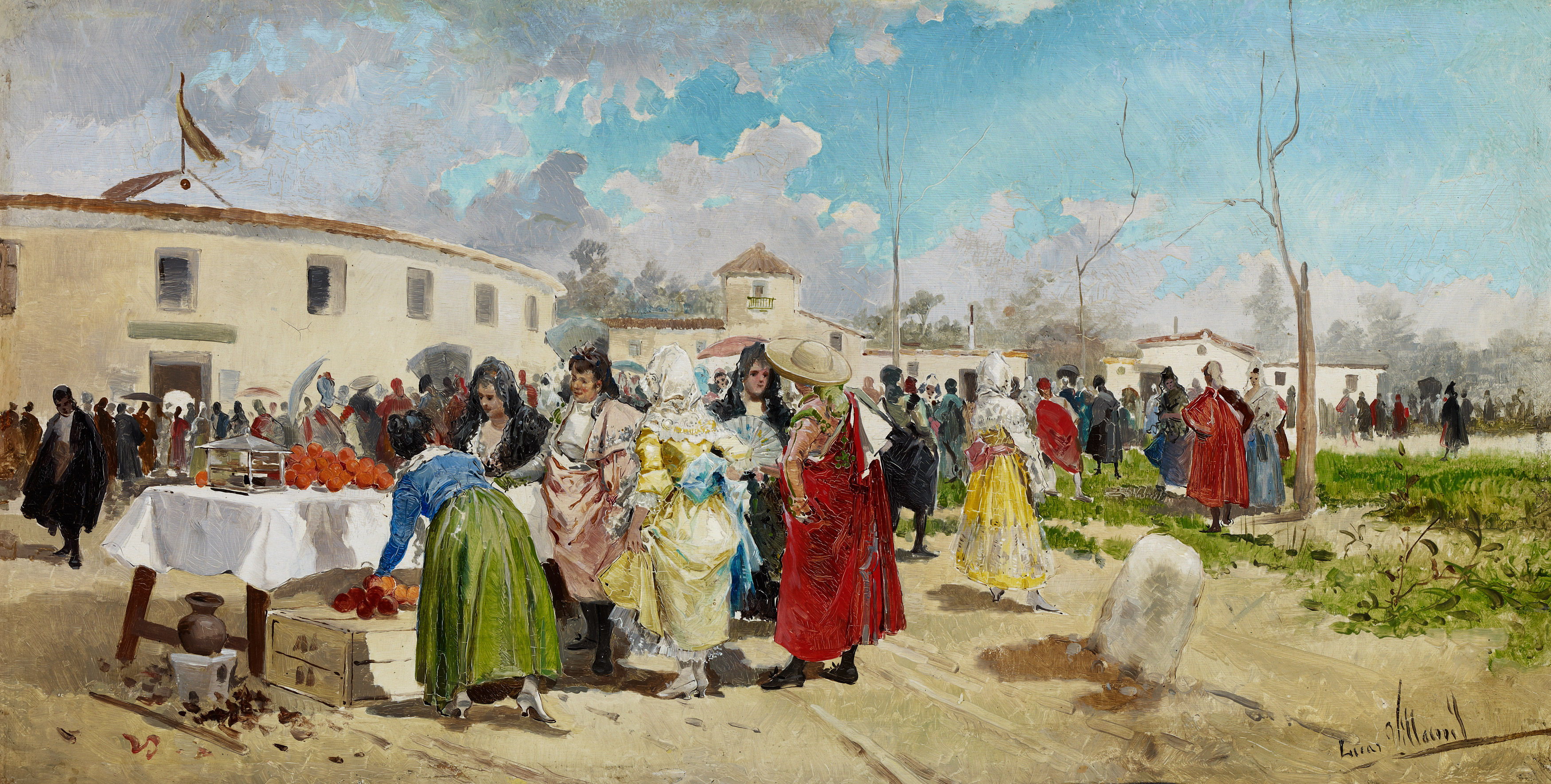 This attractive pair of panels is a very important testimonial to the more personal art of Eugenio Lucas Villaamil. In the second half of the 19th century, the artist followed in the footsteps of his father Eugenio Lucas Velázquez in painting what can be loosely defined as Goyaesque genre scenes set in the Madrid of the reign of Charles IV and featuring the highly picturesque, working-class figures of majas and chisperos.

In these two paintings Lucas Villaamil illustrated with unquestionable grace and in an evidently anecdotal vein the area around a bullring before a bullfight on a bright sunny day, followed by the hasty exit – with the festivities almost certainly interrupted – during a downpour, which appears to have been a summer storm. Thus, the first scene includes several boisterous groups of small figures on their way to the bullring. In the foreground is a stand, to which a number of manolas and chisperos throng to stock up with oranges for the event. In the other painting, several ladies in mantillas hurry to board a carriage, while other figures standing in the mud attempt to hold onto umbrellas in danger of blowing away.

Without any doubt, with its diverse aesthetic standpoints and aspects of interest – as opposed to the conventional portraits and the mediocrity of Lucas Villaamil's work when imitating his father's style – this kind of painting is among the best in his production.

However, it was in small scenes like these, with their essentially decorative aspirations and inconsequential, picturesque themes, where Lucas Villaamil best demonstrated his sometimes undervalued skill as an illustrator; he paid special attention to the drawing of the outlines of figures and objects and these he illuminated with pure colours which in some areas he applied with soft transparencies, almost in the manner of watercolour (and with curious connections with the art of Ángel Lizcano), as in the water-logged area, to great artistic effect. His fine, lively touch, the gaiety of his colours, the picturesque nature of his themes and his unquestionable skill in the arrangement of his figures endow his scenes with an attractiveness so successful in his time that ultimately he was obliged almost to mass-produce this type of composition. One well-known example of this kind is a canvas entitled Afueras de la antigua plaza de toros de Madrid (“Area around the Old Bullring of Madrid”)1 which belongs to the Museo de La Habana. Set on a rainy day and with its composition and measurements – 28.1 x 47 cm – it is very similar to the paintings discussed here.

Although the building in these two panels was also identified as the Old Bullring of Madrid in the titles assigned to them for auction, that cannot be so, since the subsequently demolished bullring next to the Puerta de Alcalá is well-known from prints and models. Furthermore, in addition to its monumental proportions, it boasted two upper rows of windows and not one, as in these paintings. Indeed, the bullring in the picture is almost certainly a figment of the artist's imagination, although logically he would have taken one or more of the smaller bullrings then in existence as references, his model being those built between the late-18th and mid-19th century.

Finally, looking at the two panels simultaneously, it is clear at a glance how rapidly and sometimes carelessly Lucas Villaamil approached this kind of project, for there are noteworthy differences between the two settings. Thus, in the scene with rain the trees are arranged in another way, the pediment, flag and roof of the bullring have disappeared, and the outlying buildings are completely different.