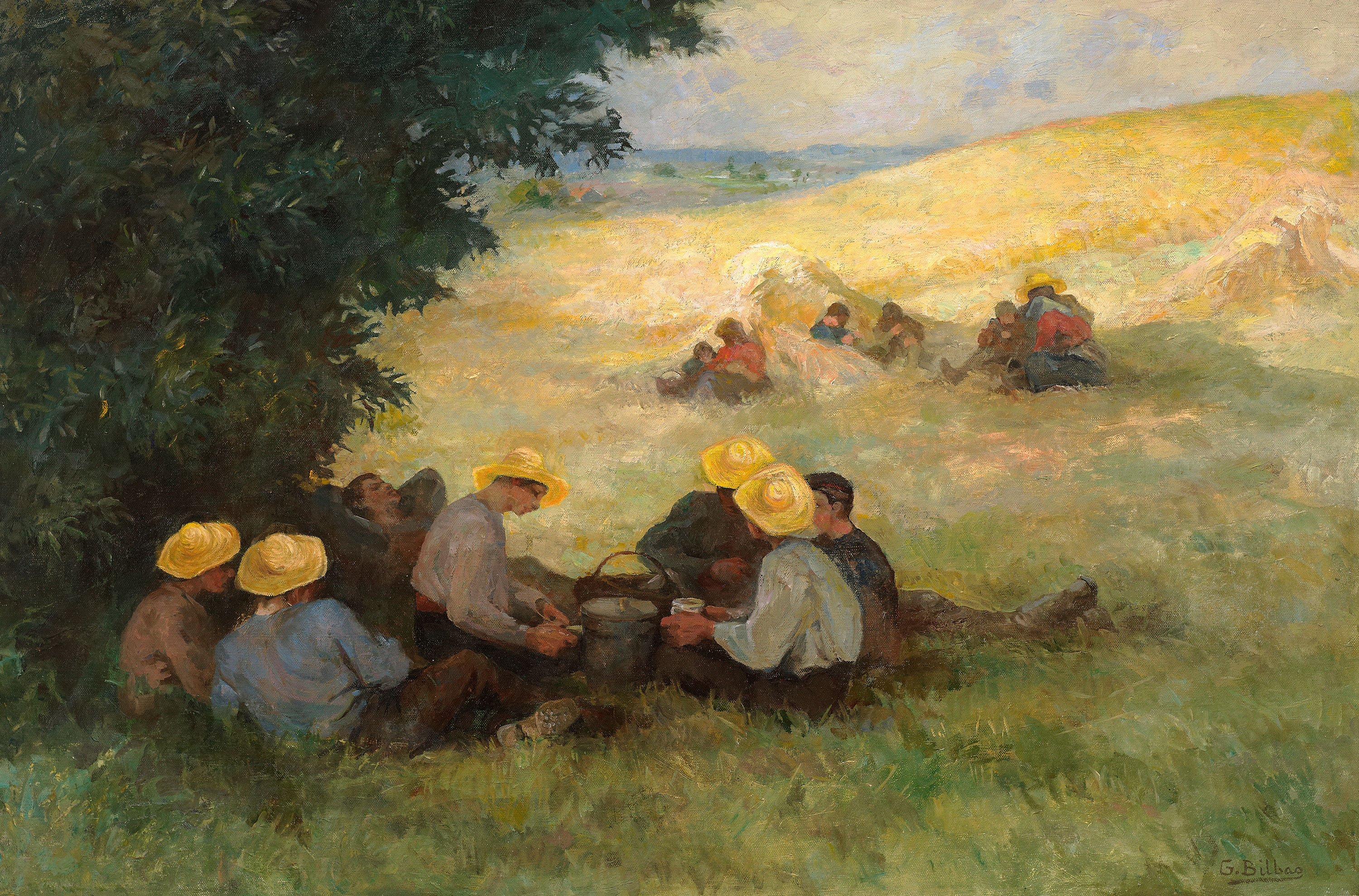 An outstanding Spanish painter of great repute, Gonzalo Bilbao Martínez was active in the late 19th and early 20th centuries. His sound training as an artist was reinforced by successive trips to Spain, France, Italy, North Africa and South America. He became one of the greatest exponents of Sevillian luminarism.

Bilbao pursued all the pictorial genres, particularly Andalusian genre scene painting, landscape, portraiture and, to a lesser extent, religious themes. Outstanding among his genre paintings are rural scenes set in the Andalusian countryside, simply and naturally depicting the peasant way of life. Bilbao began painting "regionalist" works in 1885 and this production can be said to concentrate on two main themes: the social reality of working in the country and landscape.

Painted in 1885,La vuelta al hato ("Returning to the Herd"), the first in this series, was presented at the province of Cadiz art exhibition that year. Bilbao subsequently painted two more outstanding works on the same subject, going on to produce several versions of each: La siega en Andalucía ("Harvest-time in Andalusia", 1894), which was highly praised by the jury at the 1894 Paris Exhibition, and La recolección ("The Harvest", 1896) Given the success of his pictures of farming scenes, Bilbao continued painting works of this kind until the 1920s, when he would add another theme also connected with work but featuring factories in the city of Seville.

The Carmen Thyssen-Bornemisza Collection's Farmworkers Resting (c. 1885- 1920) belongs to Bilbao's series of Andalusian countryside scenes and depicts a group of reapers resting after work. In the foreground the peasants eat as they rest in the shade of a tree, while at some distance a second group sits out in the sun among the hay. The outlines of the figures are not clearly defined and become ever sketchier as the vast meadow rolls away. Particularly eye-catching is the yellow of the peasants' hats in the foreground as it adds the only note of light amid the shade of the tree.

Technically, Bilbao can be said to have captured the light and atmosphere of the scene brilliantly by playing with contrasts of light (a trait typical of French Impressionism). Likewise, in the composition there is a clear difference between the areas of light and shade. The foreground, which is in shadow and rendered with greens and earth colours, contrasts with the sunlight which illuminates the background and consists of bright yellow tones, the darkest note of colour being the figures of the peasants. For this painting Bilbao used a limited palette of ochre, yellow and green tones for the landscape and darker ones for the figures.

Country scenes of this kind doubtless recall the French art world of the late 19th century (a world with which the painter was very familiar) as well as series of paintings by other artists, such as Millet and Vincent van Gogh. Gonzalo Bilbao's Farmworkers Resting also inevitably reminds us of Van Gogh where similarities in style and use of colour are concerned.