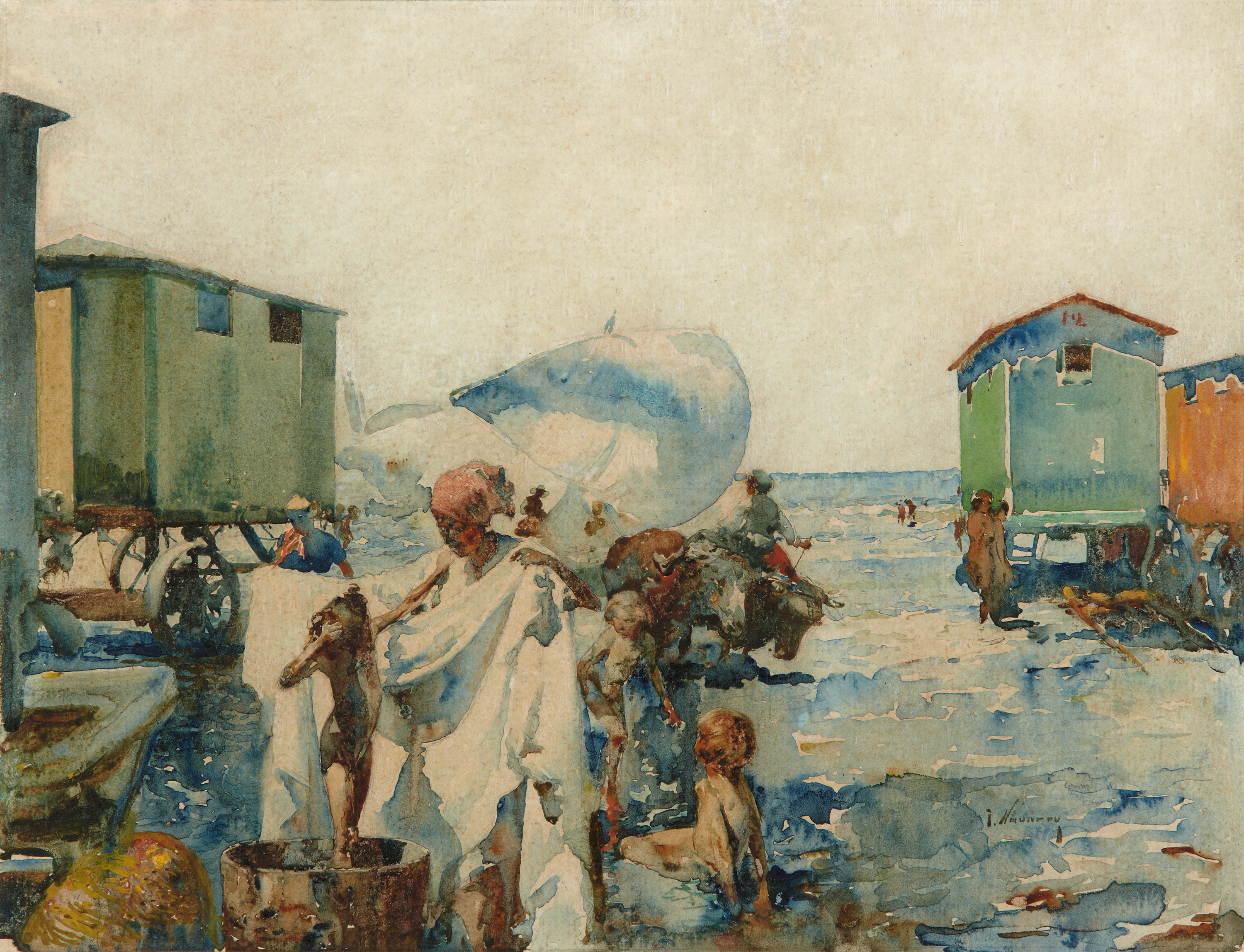 Bathing on the Beach beside the Carts

A woman in a salmon-coloured headscarf unfolds a large white sheet to dry a little girl she has just bathed in a tub. Behind her, two more children, one of them sitting on the sand, wait their turn. In the middle ground, oxen draw a boat that has just returned from fishing out of the water. The wind-filled sail is huge and consists of blue shadows. To either side in this watercolour, a number of carts arranged on different planes form a perfect frame for a scene that is characterised by the incessant movement of its components. The rest of the figures are very sketchy, and the presence of the man driving the oxen, the two children near the green cart on the right with the number twelve and the figure on the left half-hidden by the sheet is barely more than suggested.

Skilful treatment of the sunlight was a constant in each and every one of this artist’s paintings. Here, the low intensity of the apparently filtered light deadens the effects of the back lighting which dominate the composition and so endow what is a purely anecdotal genre scene with a certain dramatic air that does not truly correspond with what is depicted. All this is achieved with the short, swift, confident brushstrokes essential to all watercolours and here prove the painter’s great ability to produce small compositions in a short space of time. Characteristics such as these link his art to that of two of the greatest masters of small-format painting: Mariano Fortuny and Francisco Domingo, whom Navarro very probably admired as they were currently two of the greatest representatives of Spanish art internationally. Navarro may not have travelled to Rome or Paris, but he must have been aware of the trends dictated by the international art market, which at that time called for small, swiftly-executed paintings in a genre popularly known as tableautin.

Once again, with excellent results Navarro Llorens turned to the theme of realist genre painting, set almost certainly on this occasion on the Levante sea; a theme whose maximum exponent was the painter’s friend Joaquín Sorolla, an artist directly linked to the literature of another illustrious Valencian: Vicente Blasco Ibáñez. As Carmen Gracia has recently pointed out, with the mutual friendship and admiration which apparently existed between Navarro Llorens and the famous Sorolla, there is also an intimate link between the art of the two.

In this respect, a clear relationship can be seen between this picture and two by Sorolla painted between the end of the 19th and beginning of the 20th century. Hence the similarity between the oxen which drag the boat out onto the beach and those in Sorolla’s La vuelta de la pesca (“Return from Fishing” – Musée d’Orsay). The painter from Godella was also to include oxen in his paintings Bringing in the Catch and Figuras en la playa (“Figures on the Beach”), both in the Pedro Masaveu Collection. Likewise, the children in the foreground in Bathing on the Beach beside the Carts recall those in the well-known canvas Sad Inheritance, belonging to the Bancaja Collection. Due to the similarity of theme we might recall another canvas also by Sorolla in the Hispanic Society of America, New York, entitled Playa de Valencia (“Valencia Beach”), painted in 1908. The variety of colours achieved through the new tones that achieve the desired volume, the loose strokes and precise lines, plus the similarity to the canvases by Sorolla mentioned above make it possible to date this painting to the first or second decade of the 20th century.

Bathing on the Beach beside the Carts