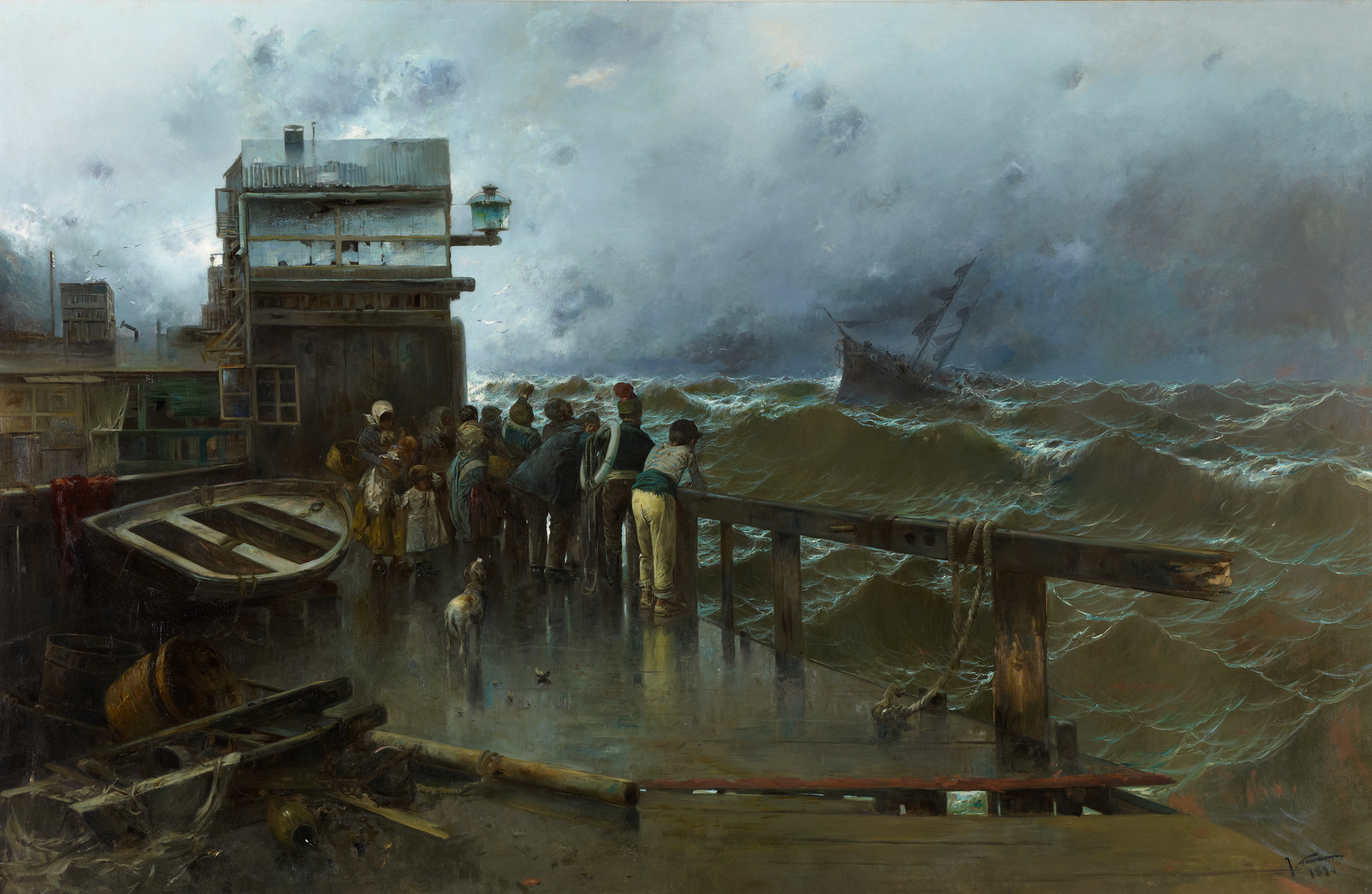 Shipwreck Warning is a painting which belongs to the line of dramatic themes connected with life at sea commonly found in Spain in the 1890s. From an early age Navarro specialised in seascapes, usually small in size and pleasant in theme. The large size of this painting, the subject matter and the date of execution all suggest that Shipwreck Warning was his entry for the 1895 National Exhibition, in which he received an honourable mention. At that same exhibition Joaquín Sorolla won a medal first-class for And They Still Say Fish is Expensive! (another dramatic theme connected with the fishing trade), and Primitivo Álvarez and Luis Bertodano medals second-class for Víctimas del mar (“Victims of the Sea”) and La nieta del mariner (“The Mariner's Granddaughter”) respectively.

Although Navarro followed other models at the beginning of his career, he is known to have been a great admirer of Sorolla's style and often took inspiration from his paintings – sometimes literally. The great Valencian marine painters of the 1890s were José Monleón, Javier Juste, Salvador Abril and Pedro Ferrer Calatayud, all of whom (particularly the last two) developed a concept of the theme with shipwrecks and storms on the high seas that was possibly welcomed by a society concerned with financial and social problems and the constant drain on the country of the Cuban War. Navarro drew his ideas for Shipwreck Warning from the work of these four artists.

This particular painting, however, has little in common with other works by those marine artists, because of the importance the artist assigned to the figures at the centre of the composition. The subject is simple: a group of relatives look on as a ship that has failed to reach port sinks. The composition is complex: a diagonal line marked by the broken rail of the breakwater divides the painting in two parts, one with the sky and the sea and the other with the buildings and figures. The painting thus contains two thematic variations: marine painting and genre painting – with all the characteristics of the social anecdotalism and sentimentality of the genre painting of the age. Ideological genre painting is linked to Sorolla's contemporary works. On the other hand, as regards the treatment of the sea and the sinking ship, the painting can be said to recall the work of José Monleón, Pedro Ferrer Calatayud and Salvador Abril. Once again, and as is frequent in many of Navarro’s paintings, the result was a hotchpotch of ideas and themes drawn from different works and recast in a single composition.

The acute diagonal composition is also found in some pictures by Pedro Ferrer Calatayud, such as Salvamento del náufrago (“Rescue from the Shipwreck”), while the kind of waves in the shape of a crest and the general range of tones in the upper area of the canvas recall marine scenes by Monleón, such as El faro de Calais (“The Lighthouse at Calais”). The colour range in the lower part of the composition, on the other hand, is similar to that in Sorolla's And They Still Say Fish is Expensive! and certain figures – the young fisherwoman with the child and fish basket on her arm for instance – are part of the iconography frequently found in Sorolla's genre works.

In contrast with his most popular paintings, here Navarro abandoned that large, loose-stroke technique that created the volume of figures practically without previously outlining them. Furthermore, and as was often the case of paintings entered at the National Exhibitions, the figures themselves and the different elements in the composition are drawn in a more highly defined, academic way.