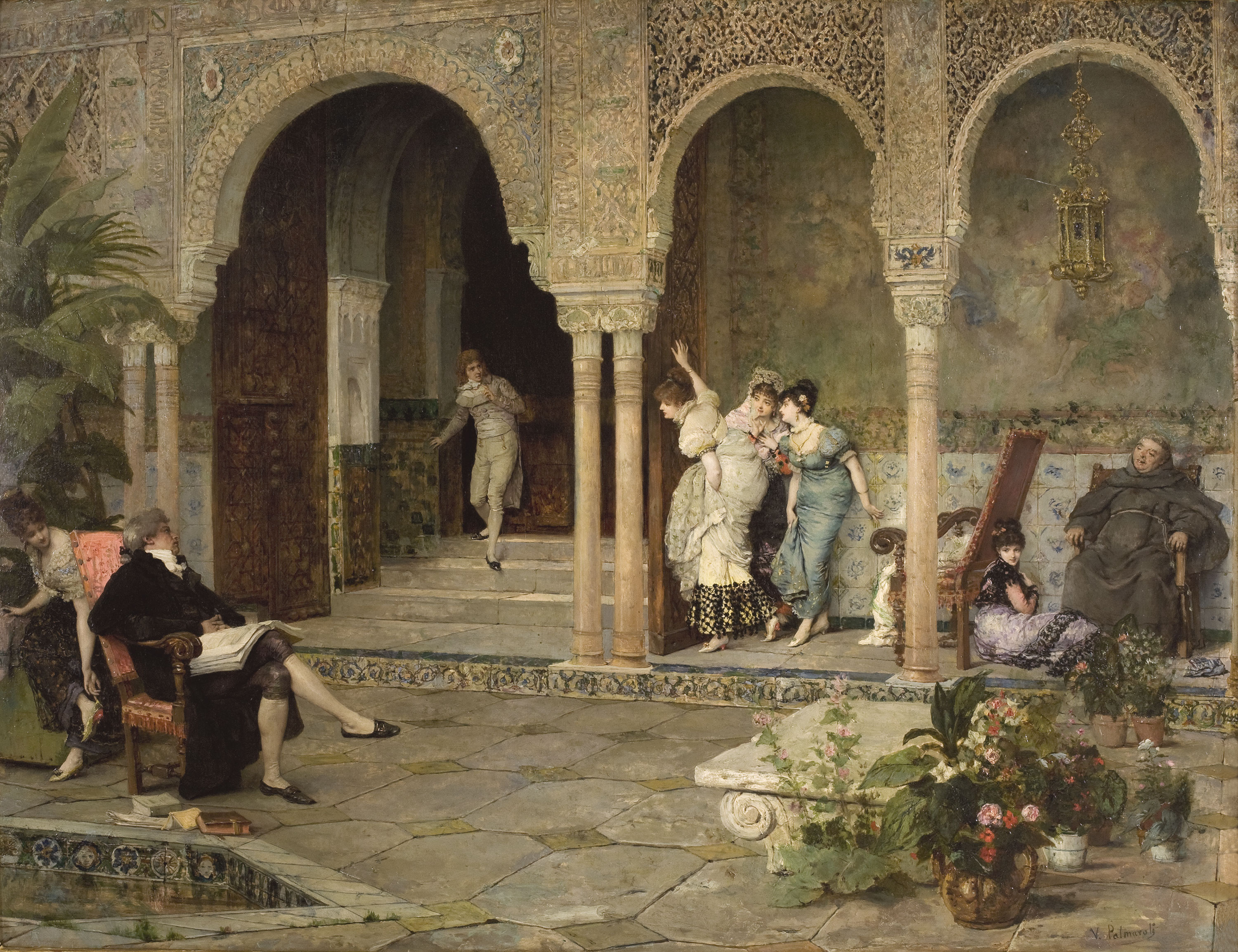 The elegant pastimes (open-air or parlour games) of the aristocrats of the ancien régime were the tableautin artists' favourite themes. For over a decade (1872–84), Vicente Palmaroli was famous internationally for this genre, producing works, like this one, whose added attraction was that they also evoked the art of the famous Fortuny. After the fall of King Amadeus of Savoy in Spain, at whose court Palmaroli had played a key role, and the demise of the famous Catalan master, who was a very close friend, the painter settled in Paris, where the demand on the art market for Fortuny-type pictures was still considerable.

To a suggestive setting a boy descends a flight of stairs leading to a courtyard, in search of the other players in the game whose name is the title of this painting, while his elders amid these rich surroundings read or muse. The boy's young playmates (models whose faces can be seen in many other works by Palmaroli) hide, disturbing an old man reading and a priest, in the process. Although the people are dressed according to 18th-century fashion, everything in this scene takes second place to architectural features directly inspired by the Alhambra in Granada. Yet this cannot be said to be a reference to the famous Nasrid palace with all its monumentality, but rather the opposite, for the decorative effect is as if scaled-down, more in keeping with the small, popular, middle-class courtyards so reminiscent of the Alhambra found in Madrid (as once existed in the palaces of the Duchess of Alba or the Duke of Anglada) or in London or Paris. Indeed, the architectural image is like a mixture of the façade of the Hall of the Two Sisters in the Court of the Lions and the portico of the Tower of Comares, although Palmaroli did add one scholarly touch to the capital of the first column on the right: the eagle of Charles V, also seen in the Mudéjar work dating from the Emperor's time in the tiled panels of the Mexuar.

This evocation of Granada is reminiscent of Fortuny, as for example in the treatment of some of the figures, and especially in the depiction of the flowers in the pots in the foreground, which are a direct reference to those found in the works of the Catalan painter, particularly the hollyhocks. Although Fortuny's influence on him was so intense and deep, Palmaroli did have an extraordinary gift for drawing and stylistic imitation and presented this painting in a way very much his own. His concentration on the sumptuousness of the tones and the precise lines of the decoration is a far cry from the master's tight, supple brush strokes. Thus, the Madrid painter displayed his exceptional précieux style through an extremely thin, sometimes almost transparent, layer of paint, leaving the preparatory drawing for the composition, which is a noteworthy example of the heights he reached artistically at this point in his career, clearly visible to the naked eye.

Pictures like this one with trivial, anecdotal themes enabled artists to display their virtuosity in the mastery of drawing and colour and proved highly successful in Paris, where they were sought out by agents like Samuel P. Avery and George A. Lucas, being the most suited to the tastes of their American clients. Palmaroli's commercial relations with these agents earned him a small fortune as well as a certain degree of international prestige.Palmaroli also supplied Goupil's with a large number of paintings, some of which, like this one in the Carmen Thyssen Collection (and confirmed by one of the original labels still on the reverse), were placed on the American market through the French company's New York office. It is therefore not surprising that Palmaroli's Alhambra-inspired paintings or those influenced by other themes then in vogue should have been acquired for some of the most reputed New York collections, as was the case with A Souvenir of Granada, which belonged to the collection of the tycoon James Gordon Bennett (Jr.).