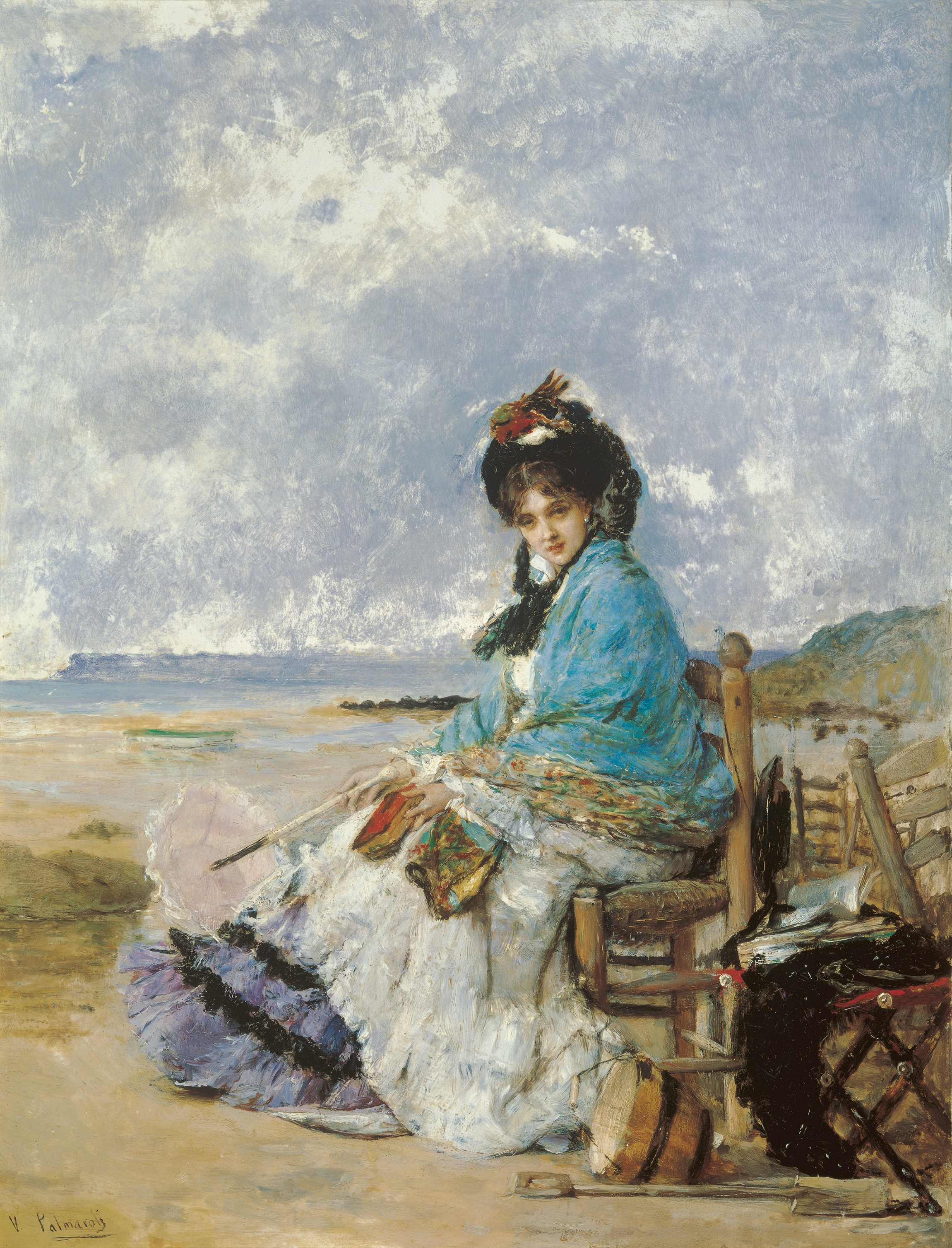 Sitting near the seashore, a lady puts her reading aside for a moment to turn and look out at the spectator. Despite her location out on the beach, she wears a long purple skirt with splendid black lace decoration, a white pinafore, a comfortable shawl and a hat with blond lace and feathers. In her hand she holds a small parasol. She appears to have settled comfortably and sits at a distance from the other holiday-makers and next to a number of rush-bottomed chairs (for resting by the sea), other useful beach items, and a few articles of clothing. Reserved, reading and surprised in her solitude, there is a melancholic, refined air about this female holiday-maker that is greatly in keeping with both the tastes of the European upper-middle class of the last quarter of the 19th century and a stereotype of bourgeois femininity well-known through literature and reflected in a perfectly defined type of art. This was a form of iconography which Palmaroli explored on a truly successful commercial basis.

In the late 19th century, going down to the beach in clothing more suited to walking, as the lady in this canvas has done, was considered the height of sophistication. In fact dressing elegantly at the seaside became a sign of true distinction only a short time after this picture was painted. Palmaroli often depicted women dressed like this out on a beach as he was keen to produce images with which the middle class, who financed this exclusive mixture of sport and leisure, could easily identify. One of the best examples of this kind of painting is En vue, now in the Museo del Prado, the most refined version of a theme which the artist would often return to in the 1870s and 80s and which would culminate within his production in Confession, also in the Museo del Prado. This latter painting is one of Palmaroli's last works inspired by that bourgeois image which many other artists, not only from Spain but from all over Europe, would also paint, although with less success. This picture from the Carmen Thyssen Málaga Collection is an outstanding example of paintings of that kind by the Madrid master. In accordance with the characteristics of these works, Palmaroli went to great pains to produce the figure at the centre of the composition, using précieux brushstrokes with tempered colour and concentrating his attention on the lady's face, endowing it with a certain sentimental look, present thereafter until the end of his career. As was customary in works of this kind, the picture was painted on a thick panel of expensive wood, so adding even greater delicacy and a certain look of solidity befitting the kind of residence it was intended for. Although the details of the clothing reveal an artistic depth and a tonal brilliance very characteristic of this painter, the panoramic sky and the horizon, as well as the beach itself, were painted rapidly and only superficially with very little impasto and more in line with the plein air criteria of landscape painting. Nevertheless, the artist captured both the light effects of the cloudy sky and the menacing reflection of the leaden light on the wet sand with a clearly decorative sense.

Palmaroli often went to the beaches at Trouville-sur-mer, in the Calvados region of Normandy, summering there between 1873 and 18833 in a fashionable location graced by the presence of famous painters and writers such as Gustave Flaubert, Marcel Proust, Claude Monet and Eugène Boudin – all of whom contributed in their way, as did Palmaroli in his, to passing down the image of the upper echelons of the European bourgeoisie of their time. Given the leaden tones in this picture so typical of northern France and identical to those used by the artist in other paintings set in that area, it is highly probable that the beach in this painting is precisely one of those at Trouville.