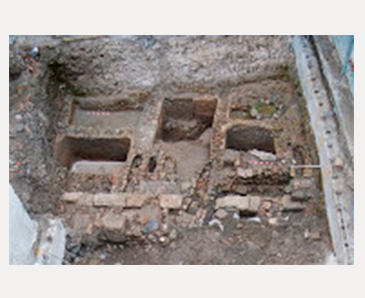 Several excavations have been carried out since 2005 on the site occupied by the Museo Carmen Thyssen Málaga, bringing to light interesting remains from the Roman era, whose extension and state of preservation have documented the uninterrupted occupation of this site from the end of the 1st century AD to the middle of the 5th century.

A suburban villa occupied the site, to the northwest of the Roman city of Malaca, outside the city walls, in an industrial zone dedicated to the production of salted fish. It had a residential domestic area, an industrial area (an almadraba or fish salting factory) and even a commercial area (a shop selling salted fish). The site was in use until the beginning of the 3rd century (almadraba) and the middle of the 4th (domestic area), abandoned around that date. However towards the 5th century this suburb of the city, on the left bank of the Calvario stream, (now disappeared, but coinciding approximately with modern Calle Granada) experienced a period of industrial revitalization in the production of salted fish with the construction on the same site of a new high quality and sumptuous building. This construction also contained residential rooms as well as rooms for the production of salted fish, with some parts of the earlier building used, and with several rooms and two sets of tanks from the factory identified.

In the Byzantine era the site was again abandoned and fell into ruin, with a necropolis existing in its place.

Among the most important remains found here there is a monumental fountain dating to the end of the 1st century and in use until the middle of the 5th, perhaps a nymphaeum, decorated with the oldest preserved wall paintings found in Malaga, featuring coloured fish on a black background. This was a hydraulic resource for the supply of water to the residential area of the villa, but must also have filled the function of social ostentation for the owner, as demonstrated by its monumentality and its pictorial decoration.

Other elements found that are a testament to the domestic and industrial uses of the villa are the decorative geometric mosaics located in the residential rooms, part of a bronze sculpture, pieces of ceramics from diverse eras, and coins, all of them signs of the everyday life lived in this place.

Likewise, different Roman construction systems have been identified, as well as a pragmatism in the distribution of spaces, characteristic of this architecture.