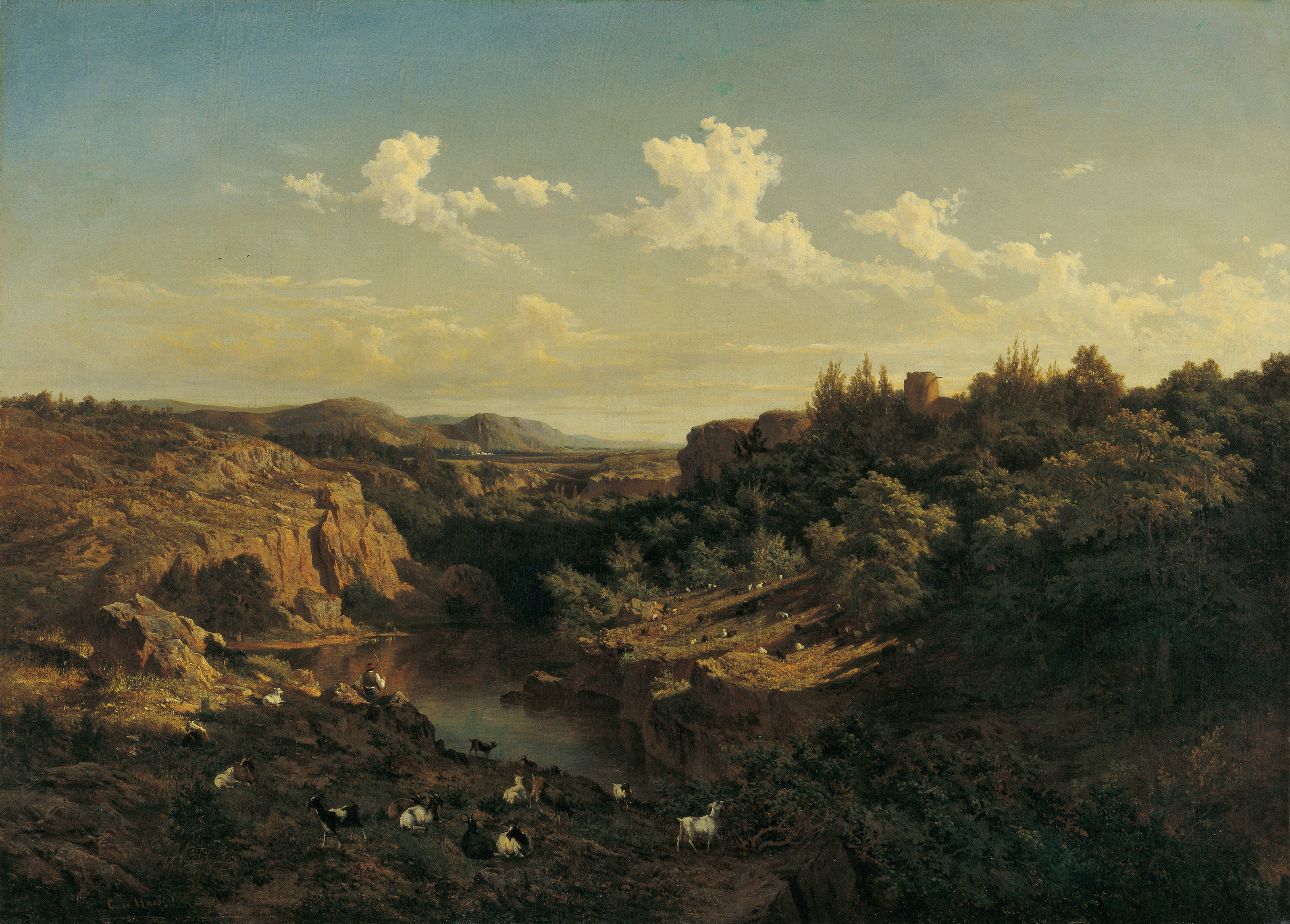 As a calm summer night falls, a goatherd grazes his flock on the steep banks of the River Piedra, whose winding course between deep gorges is lost beneath thick scrub.

Without a doubt this splendid landscape is one of the best-known examples of Carlos de Haes's early production shortly after he settled permanently in Spain. Although he was awarded a medal first-class for this picture at the 1858 National Exhibition – where he also presented another view taken from the monastery itself as well as paintings entitled Un Molino en Beaufort (Prussia) [“A Mill in Beaufort (Prussia)”] and Ruinas junto a Hasselt (Bélgica) [“Ruins near Hasselt (Belgium)”] – the canvas is dated two years before.

Indeed, in the summer of 1856, de Haes's good friend, the writer Federico Muntadas, had invited him to spend a few days on his estate near Monasterio de Piedra in Zaragoza. One of the most beautiful natural places in Aragon, its views, waterfalls and quiet spots immediately captivated the artist – who would finally spend the whole summer there sketching and painting pictures (which he exhibited with great success that autumn in Madrid). From then on, that area with its variety and wealth of landscapes which enabled him to capture the most diverse facets of a changing relief through numerous studies of nature (virtually all of which can now be found at the Museo del Prado or the Museo Jaime Morera in Lerida) became one of de Haes's favourite places.

This canvas is also an extraordinary testimonial to de Haes's gradual abandonment of the Romantic theories in which he had been trained. Some slight traces of them still remain, however, as in the degree of panoramic grandiosity with which this landscape was conceived and the extremely well-balanced and orderly arrangement of mountains and vegetation, not forgetting the picturesque detail of the herd, which emphasises the peaceful, bucolic sensation the artist (with splendid results) wished to convey.

Nevertheless, de Haes's rendering of the twilight of a very low sun as it casts shadow over large areas, creating extremely effective back lighting, is a fine example of the artist's acute sensitivity where the direct observation of nature is concerned – a basic innovation introduced by the painter into the teaching of landscape painting in Spain in the second half of the 19th century. Furthermore, the artist's technical mastery is evident in this view with its tranquil, calm beauty, depicted with rich impasto and rigorous lines resulting in varying volumes (defined with a precision that was to become ever freer in his mature production). Despite using a very sober palette of earth colours and ochres – the legacy of the Central European landscape school, where he had served his apprenticeship – he managed, in painting the thick vegetation of shrubs and trees so characteristic of this part of Aragon, to deploy an infinite range of tones with extremely delicate and assorted nuances.