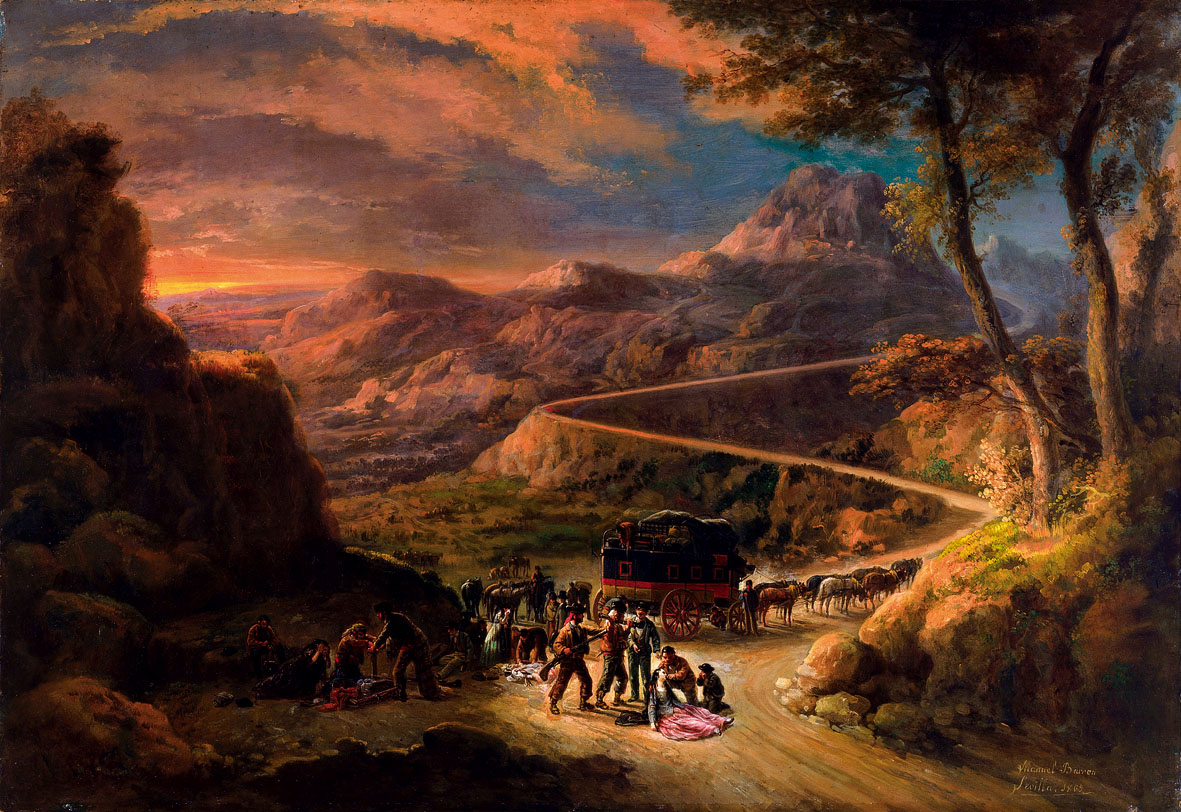 View of the Port of Miravete, Old Madrid Road

The artistic personality of the Sevillian landscape painter Manuel Barrón is well known through his most characteristic works, generally real or fanciful views of the surroundings of Andalusian towns from panoramic perspectives of open countryside with a low horizon. These views, featuring groves of trees and distant towns, are always populated with small figures and nearly all are dated in the 1850s.

However, despite his longevity, little evidence remains of the late production of this artist, who died in 1884 at the age of seventy. Some authors have pointed out the gradual shift away from the Romantic ideas so characteristic of Barrón’s landscapes to a timid descriptive classicism in works of the following decade, such as his interesting View of Seville with the Guadalquivir and Triana Bridge, painted in 1862 and acquired by Queen Isabella II. Two years later he took part for the first and only time in a National Exhibition of Fine Arts with Una posada del Huesúa, junto a la fábrica del Pedroso (“Inn by the Huesúa, next to the Pedroso Factory”) and Vista de la campiña de Córdoba (“View of the Cordoba Countryside”), and there is hardly any record of later works.

The present painting, signed in 1869, is therefore particularly interesting as it is one of his latest known works. In it, despite the late date, Barrón remains surprisingly faithful to the core ideas of picturesque Romanticism that were in vogue thirty years earlier and were utterly opposed to any trace of classicism. It even shows a more pronounced imaginative and anecdotal approach than his earlier landscapes, several of which also feature bandits and smugglers.

Here Barrón devises a landscape viewed from a high point on the horizon from which a sweeping, mountainous panoramic view unfolds of the steep mountain pass of Miravete, along whose valley the “old Madrid road” winds its way. This road connected Extremadura with the capital across the dangerous spots of the Caceres mountains by the same name, which were feared by travellers as they were a favourite hideout of bandits.

In the foreground of the composition Barrón depicts rather comically and with narrative impact a group of bandits’ assault on a stagecoach, giving the figures a prominence that is extremely unusual in his works. The coach has been stopped by the bandits, who have forced its occupants to alight. Only just beginning to recover from the shock, a woman lying on the ground in the middle of the road is assisted by her companion. At the bend in the road another lady clutches her head in despair at the sight of the attackers rifling through her trunks. Another woman in the background bursts into tears, while a traveller sits on his battered luggage with resigned despair.

Both the anecdotal slant Barrón gives the scene of pillaging and his grandiose and powerful conception of the elements of nature, especially the imposing mountains and the tattered clouds in the twilight sky, immediately bring to mind the picturesque early Romantic landscapes made fashionable both by the foreign vedutisti or painters of topographical landscapes who travelled to Spain in the first third of the century and by the greatest Spanish masters of this genre such as Eugenio Lucas and, above all, Genaro Pérez Villaamil.

This mature work furthermore evidences an evolution in Barrón’s handling of colour, which is softer, and in his treatment of light, which is always capricious but here displays subtle interplays of transparencies and chiaroscuros that give depth to the landscape and lead the spectator’s gaze to the distance.

As borne out by the label on the back of the painting, it was a gift from the unknown Gerónimo S. Couder to his son Gerardo in 1875.

View of the Port of Miravete, Old Madrid Road