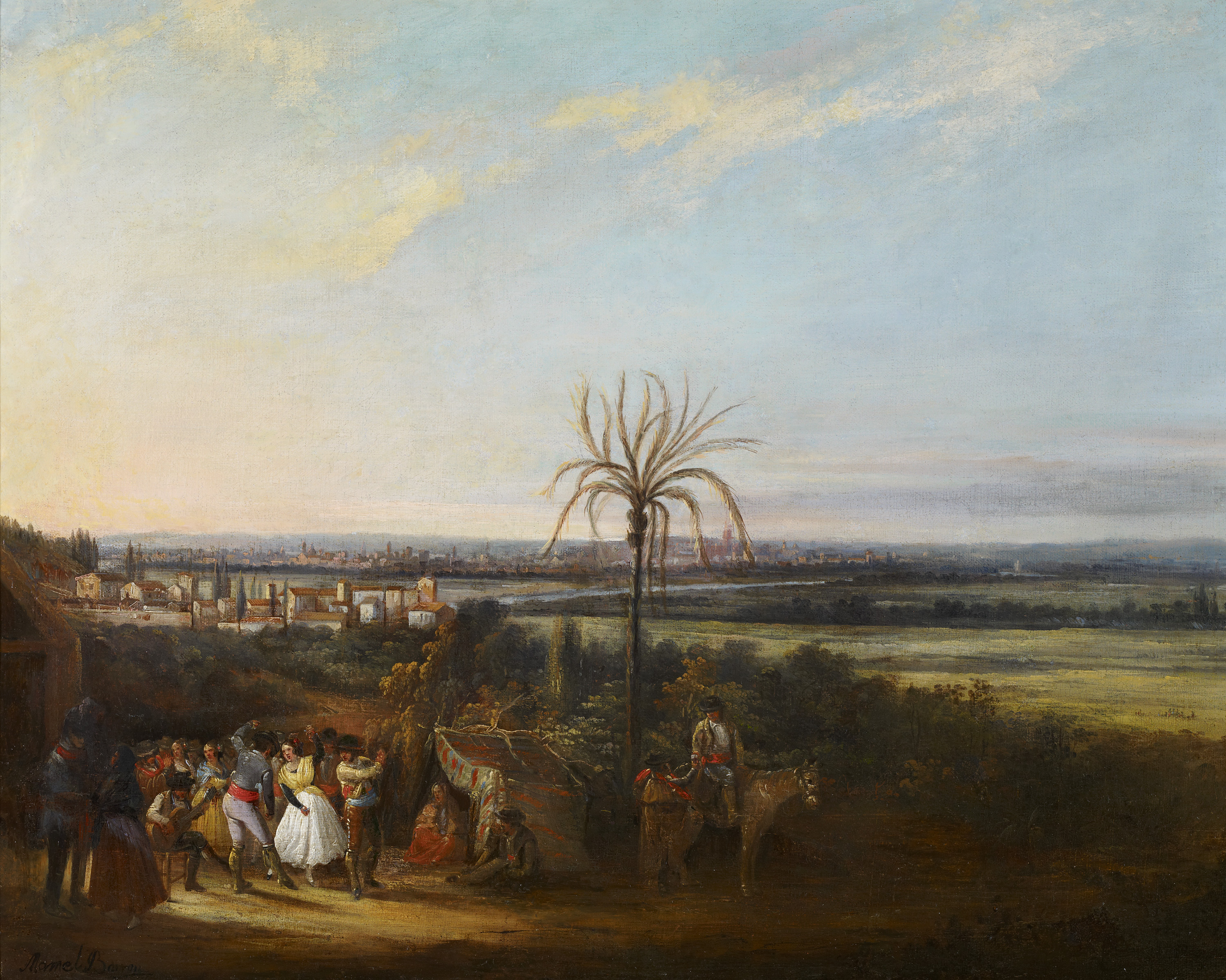 Joaquín Domínguez Bécquer was the first Sevillian painter to incorporate picturesque views of the surroundings of the capital city of Andalusia into his repertoire along with monumental views and corners of the historic district. In this respect he was influenced by the trend known as topographical landscape painting that was cultivated by English travellers such as David Roberts in the third decade of the 19th century. This trend and approach to landscapes did not go unnoticed to Manuel Barrón, a lecturer in landscape painting at the Seville art school set up in the confiscated convent of La Merced, which also housed the Museum of Painting that was newly established at the height of the liberal period.

With a rather schematic and rigid composition owing to the central position of the non-naturalistically rendered palm tree, the present painting gives an idea of the concept of Romantic landscape that was taught during those years in Seville. This concept would gradually shift to a more realistic approach – in Barrón’s case after 1850, no doubt after the execution of the present painting, which resembles other early works by the artist showing picturesque corners and views of the banks of the river Guadaira in Alcalá, a town near Seville. This place was also visited by Roberts and over time became a symbol of Sevillian landscape, particularly in the last decades of the 19th century.

This painting with a calm, sweeping sky, of which other versions and variants are known, is set in the outskirts of Seville. The view is taken from the north, from a spot located above the fertile plains of the river Guadalquivir, which can be made out briefly along with the outlines of the city’s towers and walls on the horizon. To the left of the composition is a built-up area or group of farmhouses which may allude to the surroundings of the monastery of San Jerónomo or possibly to the outskirts of the village of La Algaba, whose water meadows appear to be the setting. This composition is undoubtedly pieced together from features memorised by the artist and later incorporated into the painting, to which the artist has added, to justify the theme, a lively group of people dressed in traditional costume – the same scheme repeated in other works by the author with slight variants – who dance to guitar music in the foreground in a spontaneous celebration. The scene is lit from the sombre foreground, in what could be an improvised inn or gypsies’ or stallholders’ tent where a couple – the man attired in a soldier’s uniform – converses against the backlight in the left-hand corner.

The work could be dated to the middle of the 19th century, after Barrón had become an established lecturer and member of the Seville Academy in 1845.