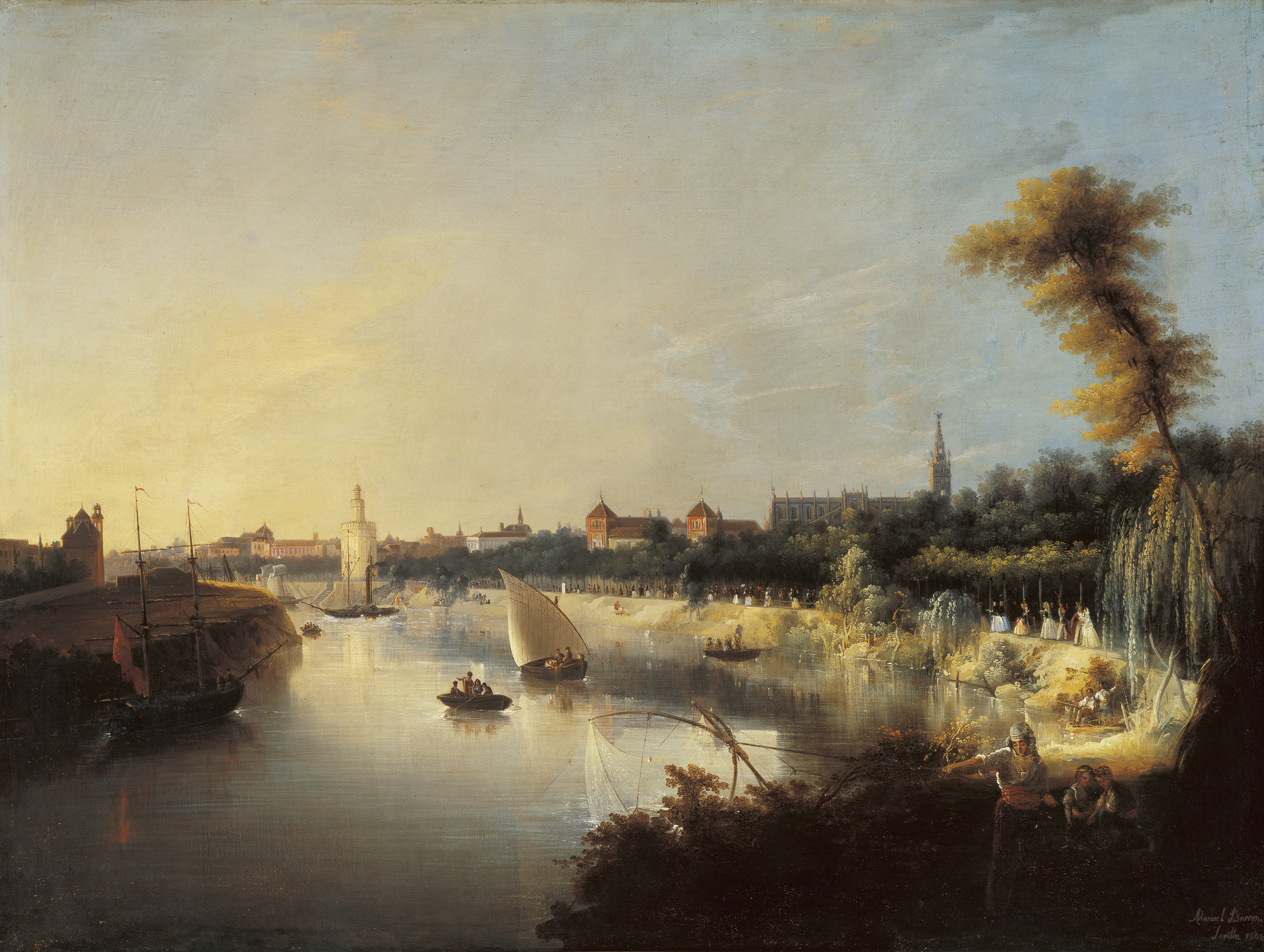 This painting of Seville viewed from the south showing the river Guadalquivir in the foreground is very characteristic of the output of the Sevillian painter Manuel Barrón y Carrillo. Its rather monumental air indicates a viewpoint near the Punta del Verde.

The view is specifically taken from the vicinity of the Paseo de las Delicias in Arjona, an urbanised and recreational area in Seville since the Enlightenment period. It was also the first sight many foreign travellers had on approaching the city, especially those of the Romantic period who generally arrived by boat, sailing up the river from Cadiz. It was an unexpected and impressive view which remained engraved on many visitors’ memories.

The painting is based on the concept of a topographical, urban, descriptive and monumental landscape in which the convent of Los Remedios, the Torre del Oro, the palace of San Telmo and the large mass of the cathedral with the Giralda tower standing out above the horizon line are silhouetted and illuminated by the sunset.

In Barrón’s oeuvre paintings like this one were probably part of a series of views of the Guadalquivir from different angles, versions showing different sections and picturesque spots of the river. This work is put together from details and sketches made from life in the spot and subsequently executed in the studio, adding compositional details and human types, such as the ships and sailing boats and the figures on the banks in the foreground engaged in traditional riverside fishing practices. Other details such as the port and the presence of a paddle steamer (symbolising the incipient industrial revolution in the city) by the Torre del Oro and the local bourgeoisie out for a Sunday stroll dressed in clothing from the Isabelline period near the Salón de Cristina make the composition something of a chronicle. The execution is somewhat stiff and the scene is infused with a rather timeless atmosphere.

Some features which can be dated and are consonant with the year of execution of the painting suggest that the scene is directly linked to the festivities that took place two years earlier to mark the birth of the Infanta María Cristina of Orleans near the palace of San Telmo (an event recorded in the lithograph based on pioneering photographs by Leygonier) and may have become engraved on the artist’s memory. The present painting is a less accurate and detailed version than others such as El Guadalquivir a su paso por Sevilla (“The Guadalquivir on Passing through Seville”) in the National Museum of Fine Arts in Havana (1851), or the painting entitled Vista de Sevilla desde la Punta del Verde (“View of Seville from Punta del Verde”, 1856), which is very similar in arrangement and features and belongs to the former Ybarra Collection in Seville; all these landscapes are similar in characteristics and format, suggesting that the studio produced different versions and of varying standard.

As for style, there are strong compositional reminiscences of earlier Romantic views of the Torre del Oro by both Roberts and Villaamil from a monumental approach characteristic of a historical theme. Although in this case Barrón takes a more descriptive and panoramic approach, he bases his work on similar starting points, the views widely disseminated through the prints published in travel books, which are enhanced here with dusk backlighting in the Romantic manner.