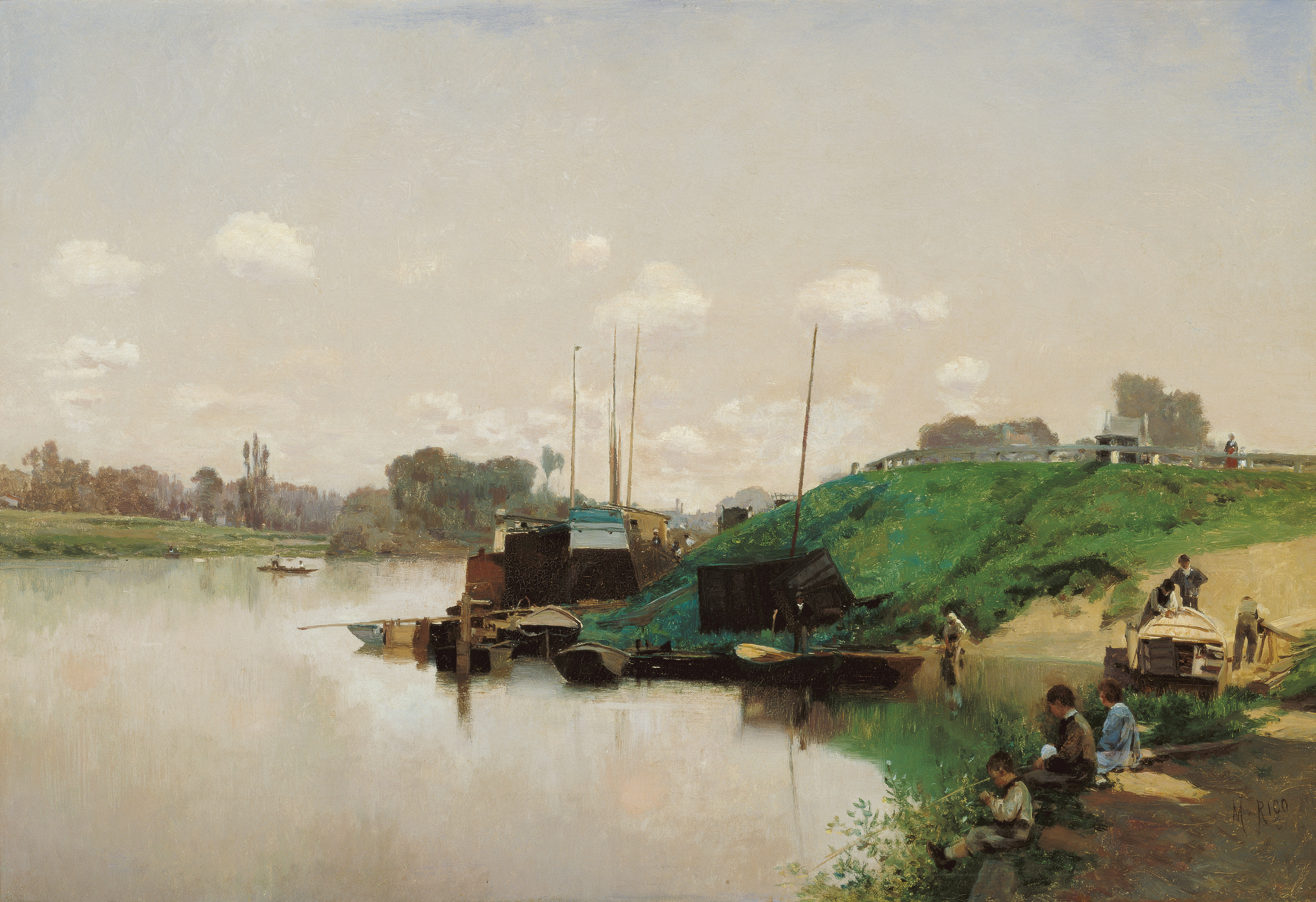 A Summer’s Day on the Seine

It is a well-known fact that most of the landscapes painted by the great master Martín Rico for the European and American markets are in the form of countless views of the city of Venice depicted from all angles in the précieux style so fashionable with the major art dealers of the period (thanks to his great friend Mariano Fortuny, 1838–74), and that this kind of painting afforded Rico a privileged social and financial position among the artists of his time, enabling him to live out his life comfortably. However, Rico also chose Spanish cities as settings for his landscapes, among these Granada (where he travelled with Fortuny in 1871), Fuenterrabía (which he visited in 1872) Seville and Toledo (1875 and 1893). In all his views he mirrored the glowing, bright colours of Mediterranean landscapes which, together with their exceptional technical quality (further confirmation of his special skill with that genre) were among the most appealing aspects of his work.

Some years before he decided to adopt the city of canals as practically the only subject of his vedute, Martín Rico lived for short periods in different parts of France, where he encountered landscapes which, due to their geographical characteristics and, basically, their light and atmosphere, were very different from the clear, sunny brightness of those he knew from Italy and Spain.

Indeed, in 1869 Rico painted several views of Poissy, and the next year of Bougival. In 1872 he lived for some time in Cloyes and in 1876 produced views of Chartres and Sèvres. He listed all the landscapes he painted in these areas in an inventory (hitherto unpublished) and this canvas must be one of them. The location, however, could be one of several and has not yet been identified. There is evidence that the painting was in the United States in the 19th century, as many of the works listed in Rico's inventory were sold to well-known American collectors and dealers, such as W.H. Stewart, A. Stevens and the all-powerful Goupil, who from Paris controlled most of the market for Rico's work.

This landscape shows a broad stretch of a river whose quiet, untroubled waters flow through green meadows and groves. On the bank, a group of children pass the time fishing near a landing-stage, where a number of boats are moored. Another boat is under repair at the foot of a flatter area near a fence bordering a road. Visible to the side is the figure of a woman washing clothes at the water's edge, while in the background a boat crosses the river. The rest of the view is obscured by the tops of tall trees which fade away on the horizon.

Although the painting is known by the title A Summer’s Day on the Seine, there is in fact nothing to indicate the season of the year, although the river is probably the Seine, which Rico preferred due to the mirror-like clarity of its water and its particular colour – qualities clearly distinguishable in the canvas and referred to by the artist himself in his memoirs: "Banks like those of the Seine and the Marne with their fineness of colour are hard to come by anywhere else; generally our rivers run over sand, as do those of Italy; this gives an unpleasant, arid-looking colour to the water, and in Germany it is the opposite for they are of a green that makes me think of apples and laugh.”

Places by rivers like this in the French interior gave Rico an opportunity to produce a kind of landscape very different from those he normally painted. They also required a completely different palette with cold, leaden colours and a soft, spongy technique to diffuse outlines and dilute distances. The final result was a view with a misty, bucolic atmosphere tinged with a melancholy light immediately reminiscent of the French landscapes of those years after Corot, which Rico was perfectly acquainted with. Furthermore, his exceptional skill as a draughtsman and the rigour of his brushstrokes render the elements in the foreground with absolute clarity, modelling objects with large planes of colour also reminiscent of the American landscape painting of the time.

In short, Rico's mastery in this small but exquisite painting – whose greatest appeal lies in the simplicity of a composition devoid of artifice or decorative pretensions – is also evident in the truly Impressionist lushness with which the grass on the slope is suggested. It was depicted with a modernity unusual for the Spanish painting of the time and of a kind which would not be seen until Aureliano de Beruete's mature landscapes at the beginning of the 20th century.

A Summer’s Day on the Seine