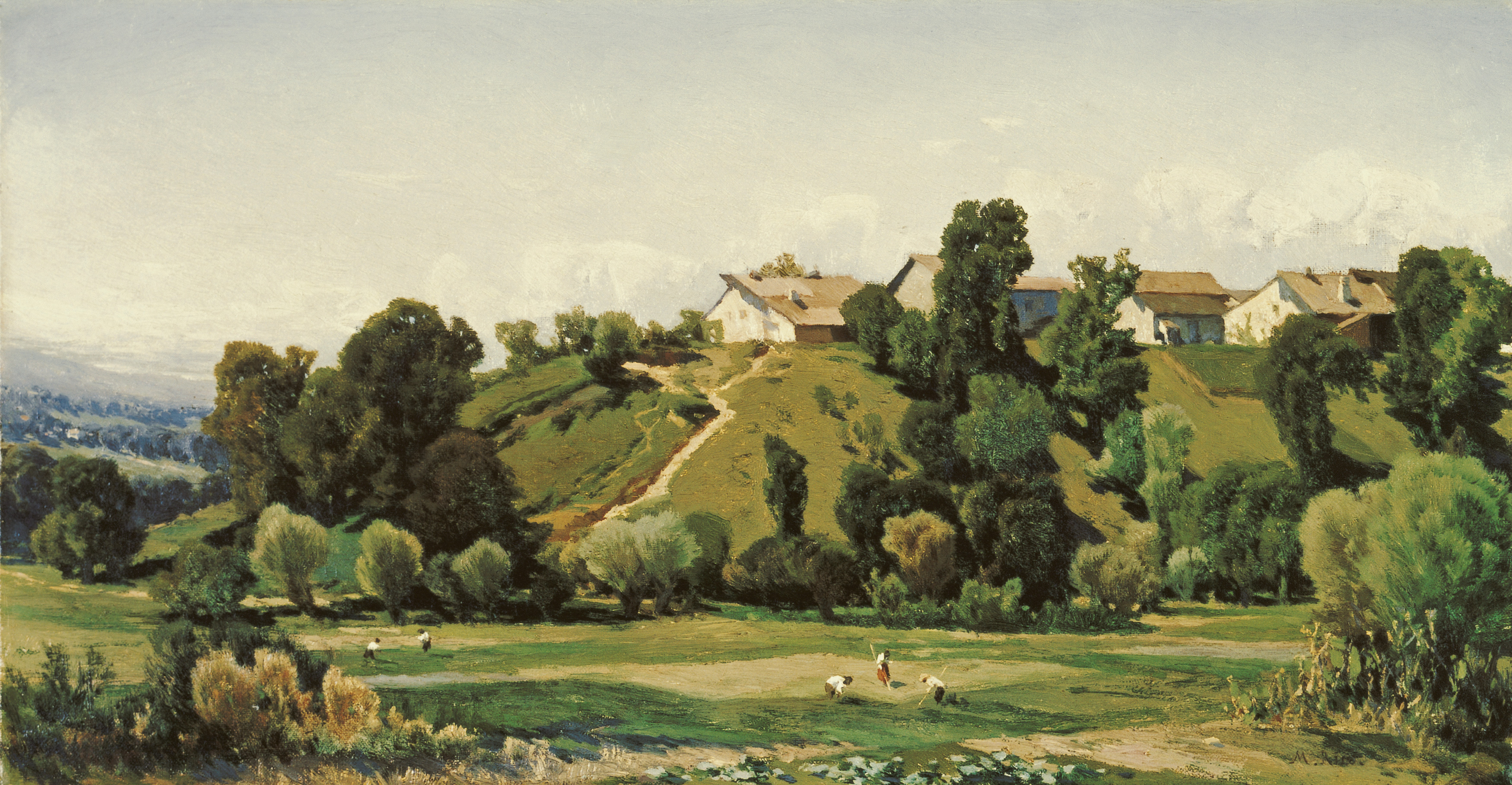 Martín Rico obtained a grant to study landscape painting abroad in 1861 and travelled to Paris in February the next year, staying there for several months. Hoping to take advantage of the end of the spring and the whole summer to work out in the open air, he applied to the San Fernando Academy of Fine Arts to travel to Switzerland and was given permission to do so on 23 May. In Switzerland he worked under the supervision of the landscape artist Alexandre Calame. He visited the Alps with Calame and set up residence in Satigny in the canton of Geneva, in southwest Switzerland, where he painted a number of pictures. As he was bound by the terms of the grant to send a work to the Academy at the end of his first year, he chose one of these, Landscape in Switzerland.

When painting Peasants, however, Rico decided against the large, open panoramic compositions he had produced in his views of the Guadarrama earlier in his career, when still considerably influenced by Romanticism, and concentrated on a "closer" rendering of the landscape. This picture is almost completely filled by a hill, whose level top serves to underline the horizontal character of the painting, with the angle chosen to capture it accentuating its solidity. Together with the houses on top of it, the same hill can also be seen in a number of pencil drawings in a notebook, most of which were made when Rico was in Switzerland (revealing his special interest in such a composition). One double-page study features the hill, but from a different angle, suggesting that Rico intended to develop it into a painting, as he in fact did. His preference for an extremely horizontal landscape centred on a flat elevation is also evident in another double-page drawing, as well as another from a different notebook whose composition is very similar to that in the painting. The latter displays very dark shaded areas in pencil. In yet another, on a single page, Rico drew the hill from a shorter distance and from the left, featuring the first two houses with the tree growing close to the second house. In two other studies, he arranged the houses in a row among the trees, paying special attention to the succession of roofs, which here are darker in colour. As Peasants proves, Rico was interested in producing an ordered composition of geometric volumes harmoniously surrounded by trees above the valley, which explains his persistence in making these studies. In other sketches in the first pages in his notebook (and as in the painting) he also included peasants gathering hay. Rico's interest in summertime landwork plus his fascination for classicist landscape had led him to copy various works by Nicolas Poussin in the Musée du Louvre, including three different sections of Summer, which depicts the biblical scene of Ruth and Boaz by the cornfield with the reapers.

What is important in Peasants is how Rico deals with each of the trees surrounding the hilltop on an individual basis. Their different colours, which vary from bluish-green to brown and include a wide range of greens, make this landscape, painted in the middle of summer, extremely true to life. The choice of the noonday light clearly accentuates the fronts of the houses, which are set off by the slightly darker shades of the surrounding land and the trees. The low clouds above the houses crown the scene harmoniously. In the lower area, the meadows are slightly oblique, which enlivens the composition, as does the arrangement of the five peasants. On the other hand, the distant views on the left, which fall gently away (and were a common feature of Rico's work of previous years) are much sketchier and, like the foreground, seem to have interested the artist less. The precise definition of the landscape's structure in the middle ground in accordance with a new method is the result of Rico's experience of French painting. From then on that stability in his compositions would be a distinguishing feature of his work.