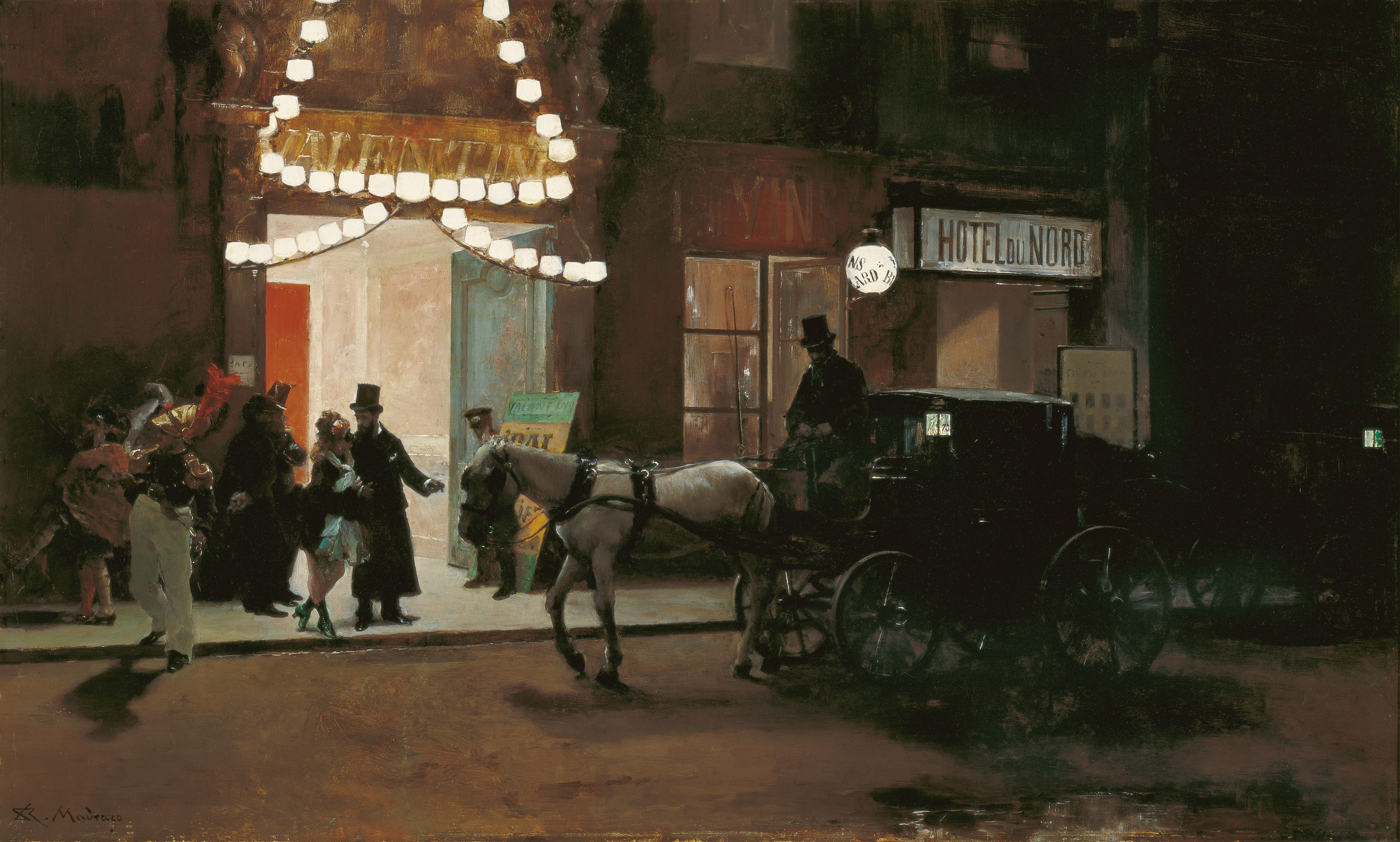 Via the doors to the Valentin dance hall, next to the Hôtel du Nord in Paris, several figures in fancy dress leave the premises after a masked ball. In the solitude of the dark street and by the light of the gas lamps decorating the entrance, a gentleman invites a girl in a mask into one of the horse-drawn cabs waiting outside, while some soldiers, leaning against the doorjamb, chat absently in front of the doorman, and other folk in costumes walk off along the pavement.

This extremely beautiful image of the world of Paris society nightlife during the last quarter of the 19th century is a particularly important example from among the huge number of genre scenes painted by Raymond de Madrazo for the international art market in the course of his life. Here the artist once again turned to the masked ball, a theme which proved especially attractive to painters of tableautins (then all the rage) throughout Europe. Indeed, in this regard, the artist went so far as to send a spectacular painting entitled Sortie du bal masque out of competition at the 1878 Paris Universal Exhibition. Highly praised, it was an extraordinary display of technical virtuosity and decorative richness, all swathed in beguiling frivolity. However, here, instead of insisting on more anecdotal and decorative features to illustrate the title, the artist only allows the frivolous side of the scene to be glimpsed through an extremely subtle veil of irony in the form of the gentleman's invitation to his young companion, as he makes these two the absolute protagonists of the painting by silhouetting them clearly against the entrance. Curiously the man's facial features are extremely similar to those of Raimundo de Madrazo himself, whose face was well-known at the time thanks to a splendid portrait – now in the Museo del Prado – painted in 1875 by his father Federico de Madrazo. However, the narrative interest of the scene is to a large extent eclipsed by the artist's interpretation of the nightlife on a street bathed in artificial light. This light picks out the names of the different establishments and splendidly suggests their interiors – the dance hall, the wine bar and the hotel – while displaying the fascination which Madrazo – and so many other artists of his time – felt for the gas-lit after-dark venues of the Cité-lumière.

Painted with an unusually sober palette for Madrazo, this picture again reveals the artist's exceptional skills and proves him a worthy successor to the précieux virtuosity of his brother-in-law Mariano Fortuny. Also evident are his extremely keen powers of observation, as seen in every detail of this scene, even in the apparently minor ones, such as the puddle in the foreground, the reflections on the wheel spokes, the letters of the shop signs and the numbers on the coach lamps.