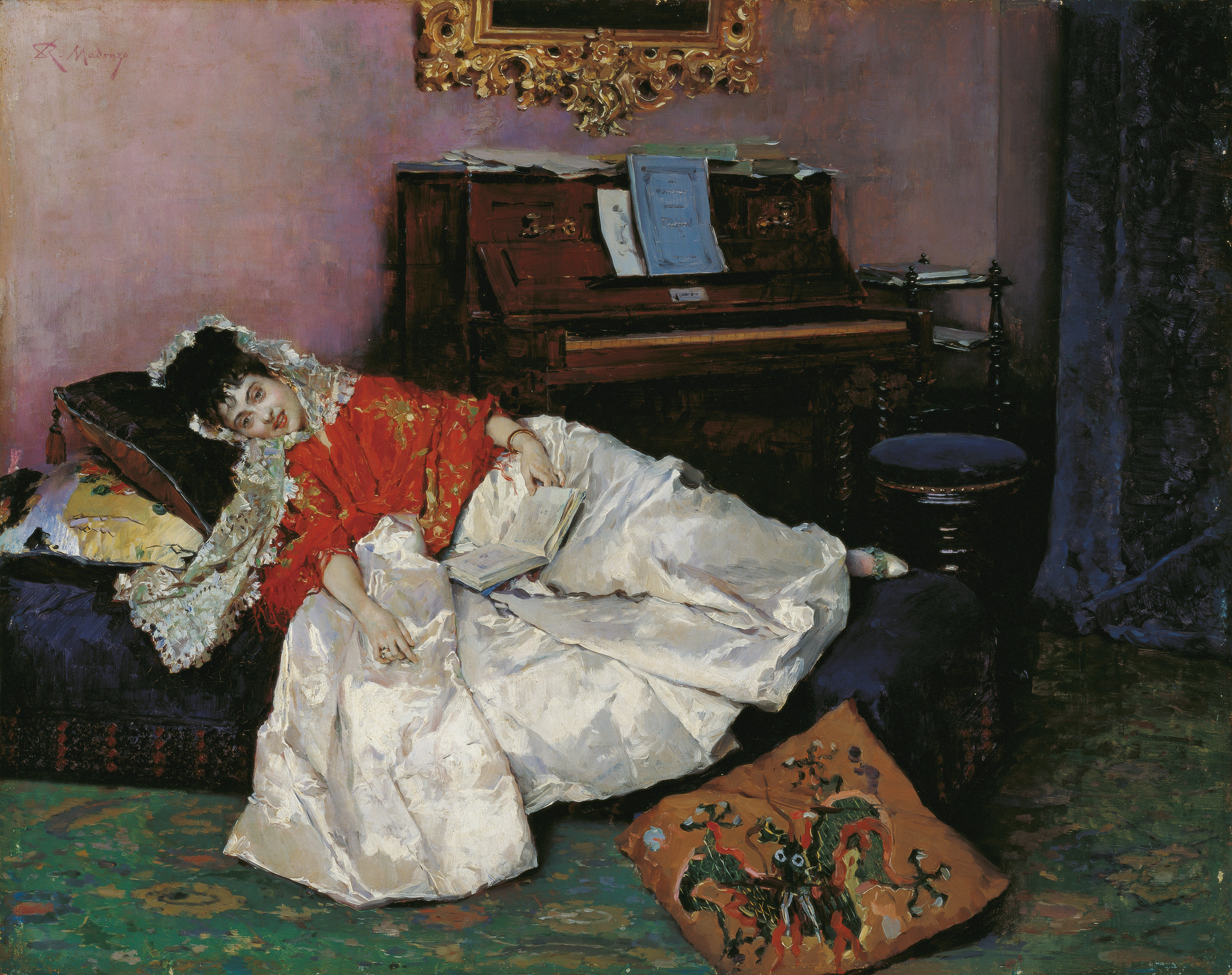 The moment the young Raimundo de Madrazo set eyes on Aline Masson, the doorman's daughter at the Paris residence of the Marquis de Casa Riera (whom he would often visit with other painter friends), he was dazzled by her beauty, and thereafter she was his favourite and virtually only model. She is featured in the vast majority of the genre paintings which Madrazo sent his dealers for the international market.

Aline's sensuous features, smooth, pearly-white skin, the deep, intense look in her large eyes, the subtle provocation of her lively, carefree manner, capable of turning her melancholy tenderness into ironic playfulness... swept Madrazo completely off his feet. However, his absolute adoration of Aline became a veritable fixation (not only on the artistic level), and over the course of many years, he reproduced her face again and again, to the point that the contemporary market was finally saturated with pictures of the model in the widest variety of poses and garbs. Yet even then, the demand from members of the aristocracy and upper classes in Europe and the Americas who admired his art never waned. Madrazo's portraits of Aline Masson came in various sizes, reflecting different moods and with varying degrees of detail. But whatever the case, artistically the results were always truly superb.

Thus, in addition to the half-length images of the model, in which she generally appears tastefully and fashionably dressed – the most important being The Model, Aline Masson, with a White Mantilla, The Model, Aline Masson, Birthday Wishes and Aline Masson in a Gauze Hat – much more frequent are the full-length depictions in dresses from different periods, generally with masks or in curious, anecdotal poses. In all of these she is the essential and absolute focal point of the painting, to the extent where the surroundings are often barely visible. This type of painting was a particular favourite with the contemporary art market and is well represented in the Museo Carmen Thyssen Málaga Collection by Model Making Mischief.

Finally, as a variation, Madrazo occasionally broadened his field of vision and, without detracting from his model's prominence in the picture, depicted her in surroundings that served to accentuate considerably the evocative character of works with trivial themes and basically decorative aims, allowing him to give free rein to his extraordinary pictorial skills. These he had developed under his brother-in-law and close friend Mariano Fortuny within the précieux style so in fashion in those years. Indeed, Fortuny, Martín Rico and Madrazo would form the great "triumvirate" of masters in the Spanish and European art of the last quarter of the 19th century.

The Reading (Aline Masson) is a splendid testimonial to this last, less frequent mode of painting in Madrazo's production.

Here she reclines indolently on a large cushion on a divan. Her pose is abandoned as she looks out at the spectator, resting after leafing through a book now in her lap. She is dressed in the "Spanish style" with a silk lace mantilla, a crimson embroidered Manilla shawl and a full white satin skirt spread out over the front of the divan. Visible behind her are an upright piano next to a shelf from which sheet music has been taken and now lies scattered on the piano top.

A magnificent example of Raimundo de Madrazo's most exquisite technical refinement, this painting speaks volumes about his exceptional skill and extraordinary decorative instinct – the main secrets of his huge success during his lifetime. Indeed, in addition to the extremely delicate treatment of Aline, whether in the skin tones of her arms, the shadow of her eyes, the meticulous details of the simple jewels she wears or the tactile qualities of her garments (particularly so in the blond lace or the shot silk of her dress), Madrazo demonstrates his total mastery in the depiction of the different elements in the room, thus contributing to the creation of the intimate, detached atmosphere in which the scene is set. Details such as the light on the furniture, the iridescence of the velvet of the stool, the pattern of the carpet or the yellowish patina of the ivory piano keys are revealing examples of the master's capacity for observation down to the very last detail. Especially significant, moreover, is the artist's decorative sense in the choice of the two large Chinese cushions which also serve as testimony to the "Oriental" fashion that pervaded Europe and especially Paris in the last quarter of the century and was so influential on the art of the time.

Finally, it is curious how Madrazo used some of the pieces of furniture seen in this picture almost like props in his period paintings of those years. For example, the mirror with the mixed plant decoration above the piano is featured with a practically identical design in the paintings entitled The Music Lesson and The Guitar Recital, both set in the 18th century.