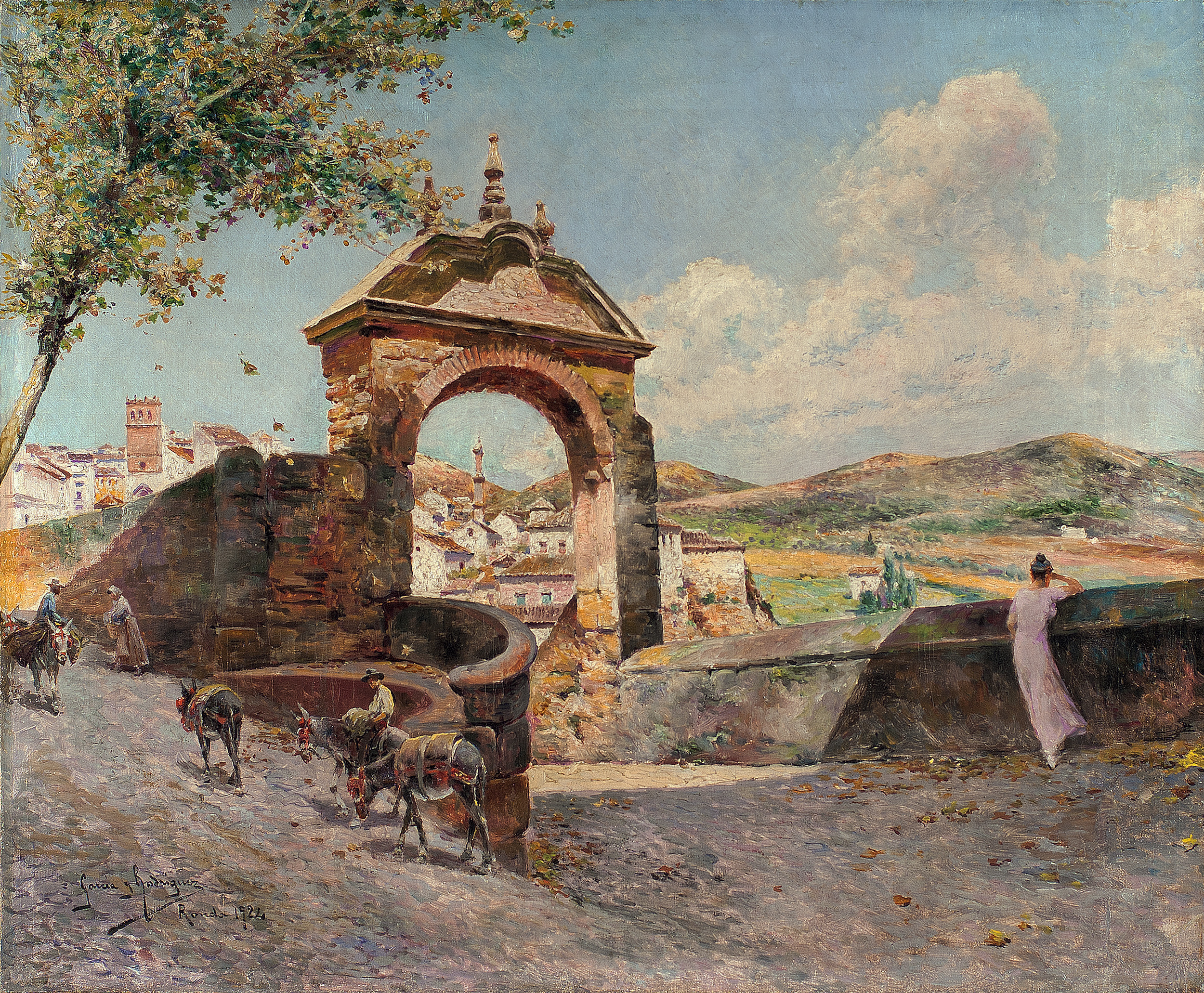 Since the early years of his training under the Seville painter José de la Vega (of the de la Vega brothers family saga fame – they were active in the middle of the 19th century), García Rodríguez concentrated on a purely realist form of art, initially influenced by Fortuny's work and local genre painting. However, he later developed a Romantic style of landscape painting which, with the styles of other pioneers in that genre such as Sánchez-Perrier, became the basis for the teaching of that subject at the Alcalá de Guadaíra School. There is no doubt that this was a milestone in the practice of a form of painting connected with landscape and nature in Andalusia.

As García Rodríguez's extremely prolific career progressed, he tended more and more towards an illustrative, précieux style covering a broad spectrum, from rural and urban genre themes to pictures of buildings and anecdotal subjects all highlighting the picturesque. For García Rodríguez fame arrived, at least inside Spain, at the 1890 National Exhibition, where he was awarded a medal second-class (as was Emilio Sánchez-Perrier for his painting February). This came as a turning-point in Andalusian landscape painting within Spain and a permanent boost to its Sevillian form.

In a review of 1896, the art critic Sedano described García Rodríguez as an artist who cultivated compositional landscape with intentionally picturesque settings which he then filled with different types of local folk to enliven and bring dynamism to the scene. These compositions were always executed with discretion and in great detail – and demand for them was high in middle-class circles. Hence the frequent appearance of García Rodríguez paintings on the market, not only in Madrid and Barcelona (cities he would often visit), but also abroad. Ultimately, however, he came to be regarded as a run-of-the-mill artist, albeit with a certain amount of class, who swelled the ranks of those painters who, since the first local Romantic landscape painters, had catered for a social group with a preference for paintings with "tourist traits" and a few historical or picturesque details thrown in for good measure. The critic reproached García Rodríguez for allowing the quality of his previous work – which had been highly praised in the 1880s – to fall, and for: "Succumbing to the affectation of photography" and taking pictorial prototypes and duplicating them in profiles, stretches of water and skies, and even combining parts of other paintings and presenting them as small-format panoramic views. "Today García Rodríguez is simple, elegant, seductive, and his canvases have nothing of the fantastic about them; they are pieces snatched from Nature", but "his artistic imagination appears to be exhausted".

Nevertheless, in the 1920s both Manuel García Rodríguez's fame and the dissemination of his work reached their height, having coincided with a period of economic prosperity in Spain during the years of the Great War. Moreover, perhaps it was because of the death of a number of fellow painters of his generation who had been more influenced than he by international art in general and French art in particular, that García Rodríguez suddenly found himself the leading light of contemporary Sevillian landscape painting.

Whatever the case, local landscape painting with its possible Andalusian content had by then acquired new aspects and viewpoints – ranging from the pure via the traditional to the historicist – as well as others reflecting the incorporation of modernist aesthetics and sensitivities. This came after exposure to and adoption of the pictorial idiom of Impressionism (in a form that was still a far cry from the movement's artistic and conceptual orthodoxy). The point was, however, that there had been a re-evaluation of the pictorial and the use of light, and this, to a certain extent, revitalised García Rodríguez's painting, for he began concentrating on new urban themes, such as courtyards, streets, parks, riverbanks, markets, church squares and gardens. He also turned to painting picturesque genre settings with local elements and folk, in which the anecdotal was a complement to the landscape, always referring to places and cities with "character". Still somewhat under the influence of précieux painting, García Rodríguez applied these criteria to many of his contributions to the illustrated magazines of the time, including La Ilustración Artística and the recently established Blanco y Negro and La Esfera.

In the final years of his production, Manuel García Rodríguez was mainly active in Madrid and Seville, although he continued to provide paintings for the American market, particular Argentina and through José Pinelo, who was also a painter and had been his colleague since the pioneering days at the Alcalá School. Since the early years of the 20th century, and particularly in the 1920s, he had produced various series of paintings – on the Alcazar at Seville, Sanlúcar and the coast and port of Cadiz – in addition to smaller numbers of pictures of Tangiers and especially picturesque spots like Ronda.

Dated in the year prior to the artist's death, Ronda gives a picturesque view of the old bridge, popularly known as the "Roman Arch", in the historical, evocative city of Ronda (also the site of the "Seat of the Moorish King"), while focusing on the bend in the slope leading up to the Nasrid medina or old quarter. At the centre of the composition rises the Philip V Archway, at the end of the bridge which spans the river Guadalevín and near the area containing the Arab baths. A certain tourist picturesqueness (above all associated with the years prior to the 1929 Ibero-American Exposition and the allocation of funds by the Marquis of Vega-Inclán) seems to impregnate this scene of local folk and their donkeys with Moorish trappings.

The painting documents the state of the bridge prior to its last reconstruction. Built on the site of the ancient Arab gate which led into the old part of the city, it is situated in the upper walled area. The view in the shade of the late afternoon, with the sun consequently shining from the west, is seen from inside the city, which explains why the Bourbon coat of arms with the date of the arch's construction cannot be seen in the painting. The arch stands at the end of the bridge, which stretches as far as the new part of the city (today known, with its church of St Cecilia, as the Padre Jesús district), seen here in the background and brightly lit, like the mountains around it, by the sunlight. The old bridge used to provide access to the oldest part of what was called the "market" (whose name is taken from an area where cattle dealers once gathered to do business and pedlars set up their stalls), in a large paved area called "Royal Street".

On the right of the picture, the pose of the woman (who from her viewpoint would be able to see the Arab baths to the right of the bridge in the lower part of the parapet she leans against) reflects a mixture of solitude and melancholy as she gazes on a landscape that we cannot see. Given the contrast between her city clothes and those of the figures on the other side of the painting, she would appear to be a tourist of some kind, which suggests that this composition was copied from a photograph.