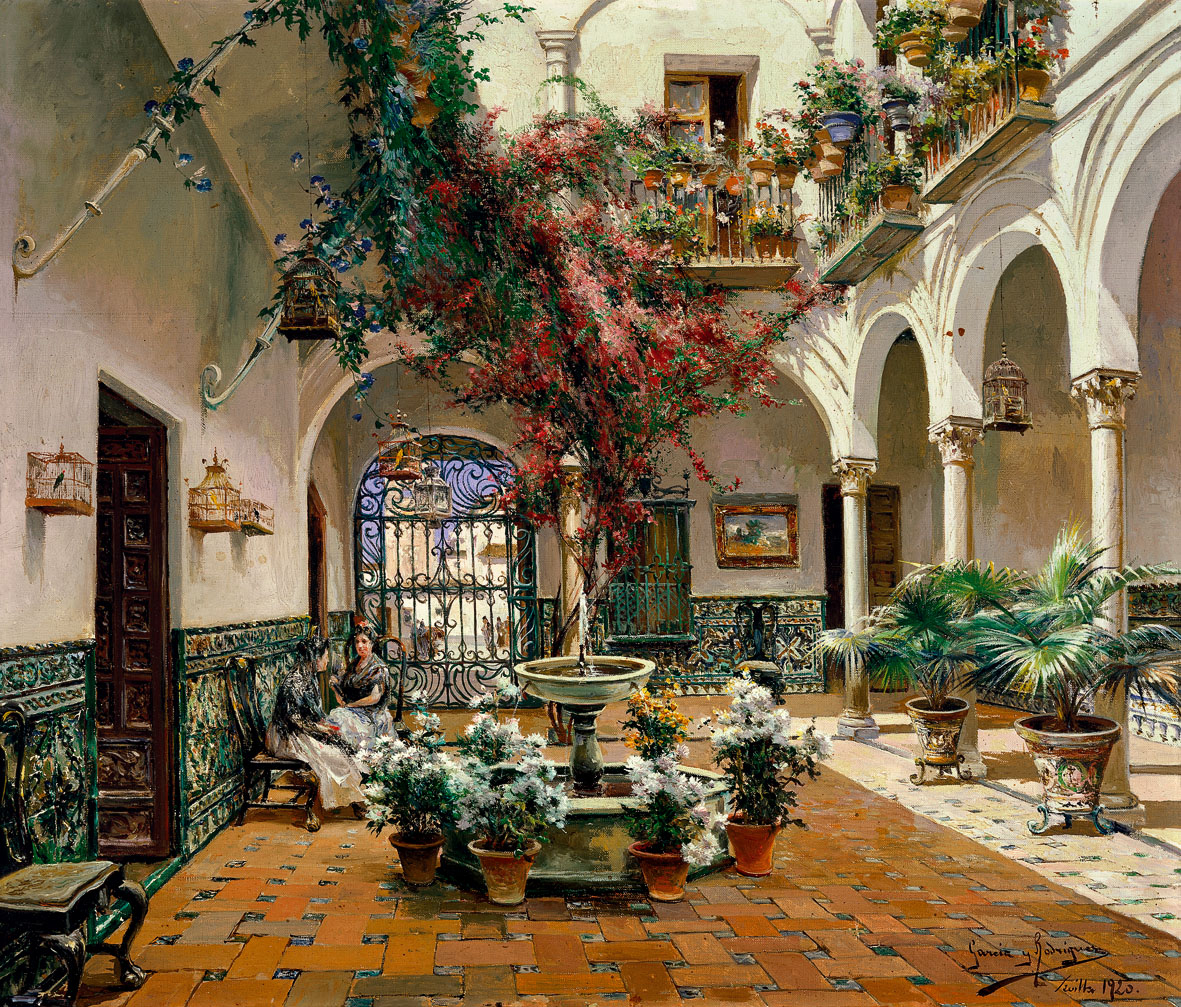 García Rodríguez painted this picture with clearly descriptive aspirations, although with a slightly contrived central perspective. The scene depicts the quiet domestic life inside a Seville courtyard on a sunny Sunday morning. The mantilla and peineta worn by one of the two women who are sitting and talking, as well as the missal in her hands, would seem to confirm the day of the week. On the other hand, her companion wears a small shawl, has flowers in her hair and holds a fan. Her appearance is more plebeian and she could therefore be a neighbour or a servant.

As early as 1896 the critic E. Sedano expressed the view that García Rodríguez's landscapes simulated "theatrical decorations. First the background then the wings". Here the setting, like a cross between a real theatre set and a backdrop, could well serve in the production of the Álvarez Quintero brothers' plays or as a mise-en-scène for characters from novels set in Seville by writers of the moment like Pérez Lugín or Muñoz San Román, from articles by J. Andrés Vázquez, or from the instructive, moralistic stories of Canon Muñoz y Pabón, who was a close friend of the Andalusian artist’s and championed and inspired popular Sevillian customs and devotions.

The noonday hour allows a pleasurable view of the effects of the light as it envelops balconies, flowers and other details – the graceful, sensuous red bougainvillaea hugging the central column; the flower pots densely filled with geraniums and carnations; climbing plants and ipomoea entwined around the upper balconies to the left; and the pots of kentia under the arches. This is a veritable showcase of Sevillian interior design in which features of a stately way of life and others of popular tradition come together and are reinterpreted with a look largely revamped by modernist aesthetics and their effects – light, colour and a certain visual dynamism, all within some kind of sensuous universe or domestic Eden. The numerous cages with singing canaries, the iron railings, the sinuous wrought-iron gate leading to the porch and from there out to the church square, the fountain at the centre adorned with potted chrysanthemums, the panels of Triana tiles, the old ceramic pots holding exotic palms, the olambrilla floor tiling and even the set of Chippendale chairs... all speak of a mass of details which regale the senses as they illustrate past splendour.

History, a popular past, light, colour, sounds and pleasing domestic murmurings smoothly combine to form an ambience both tender and feminine. In all, a description of things Sevillian – with which the artist was by no means unfamiliar – and situated within the debate on the uniqueness of Sevillian architecture – with which the painter was to identify himself – as local characteristics of the ostentation of class both aristocratic and traditional; this was the new Sevillian middle class on the eve of the 1929 Ibero-American Exhibition.